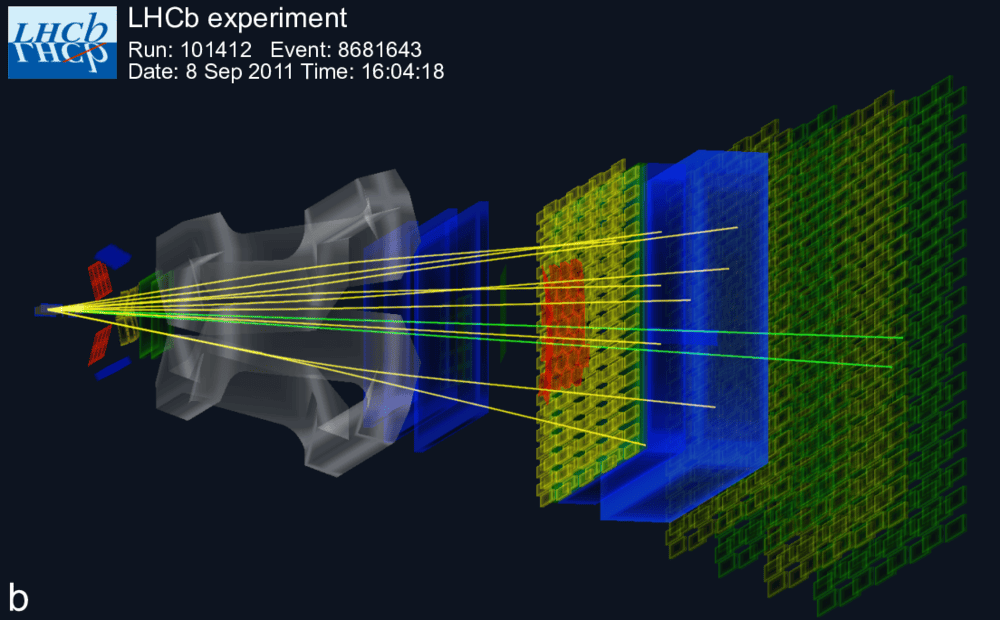 The LHCb experiment at CERN's Large Hadron Collider show proton-proton collisions at the interaction point (far left) resulting in a shower of leptons and other charged particles. The yellow and green lines are computer-generated reconstructions of the particles' trajectories through the layers of the LHCb detector. Credit: CERN/LHCB Collaboration

A new study of experiments in the Large Hadron Collider suggest that some particles – leptons, to be precise – are being treated by forces in strange ways not predicted by the Standard Model.

The Standard Model of particle physics explains most of the known behaviours and interactions of fundamental subatomic particles. It has held up well over the years despite some shortcomings, notably its inability to account for gravity.

The team of CERN physicists analysed data collected by the LHCb detector during the first run of the LHC in 2011-12.

The researchers looked at B meson decays – processes that produce lighter particles, including two types of leptons: the tau lepton and the muon.

Unlike their stable lepton cousin, the electron, tau leptons and muons are highly unstable and quickly decay within a fraction of a second.

According to a Standard Model concept called “lepton universality,” which assumes that leptons are treated equally by all fundamental forces, the decay to the tau lepton and the muon should both happen at the same rate, once corrected for their mass difference. However, the team found a small, but notable, difference in the predicted rates of decay, suggesting that as-yet undiscovered forces or particles could be interfering in the process.

“The Standard Model says the world interacts with all leptons in the same way. There is a democracy there. But there is no guarantee that this will hold true if we discover new particles or new forces,” said study co-author Hassan Jawahery of the University of Maryland.

More from the University of Maryland here.