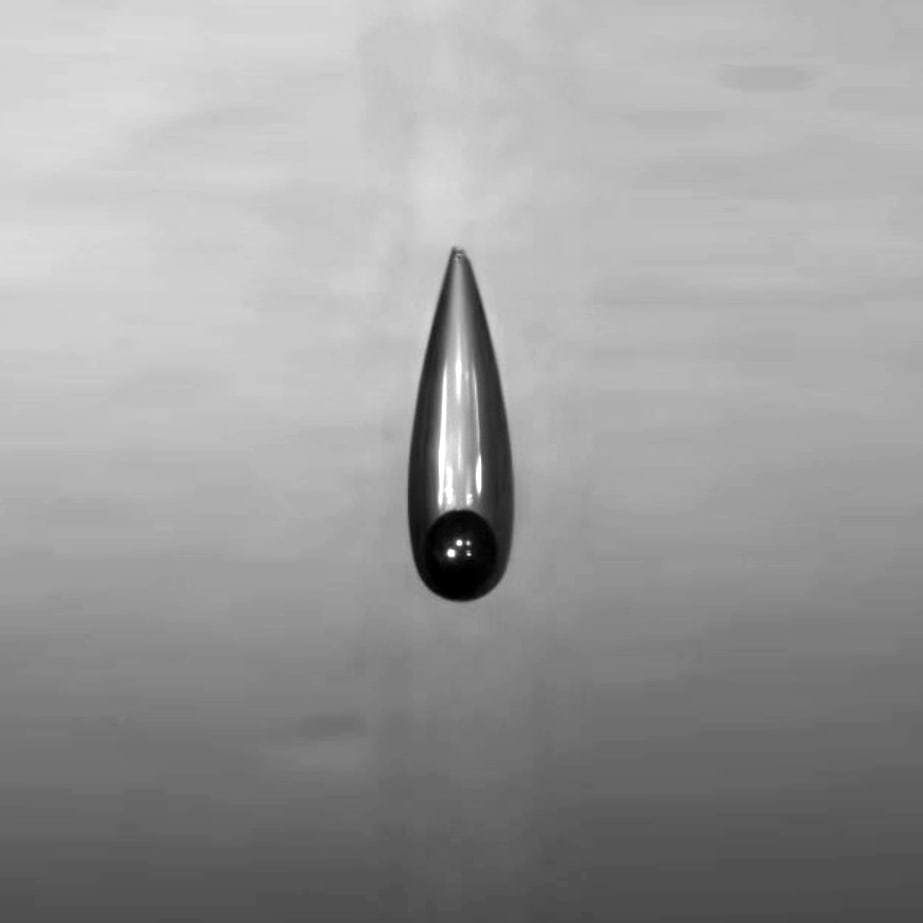 Water will easily stop a bullet, but it can’t stop a ball sinking in a bubble.

This is the remarkable result from a series of experiments that have for the first time shown objects sinking in water with close to zero drag, finally proving an 18th century theory in physics.

Swimmers experience it, fish have evolved their sleek shapes to minimise it, ships are slowed by it, and submarines use copious amounts of energy to defeat it. Drag slows everything down in water, and removing it is the holy grail of fluid mechanics.

Improvements of just 5 or 10 per cent drag reduction can have a major impact on fuel efficiency and speed, but what if you reduce drag by 100 per cent?

A team of researchers from the University of Melbourne, Kind Abdullah University of Science and Technology Saudi Arabia, and the Institute of High Performance Computing in Singapore have cracked it. Their findings are published in the journal Science Advances.

The experiment looks simple. Drop a 2-centimetre-wide metal ball into a deep pool. The ball forms a large gas bubble in the shape of an elongated teardrop around itself and then the ball-plus-bubble sink together. Do the maths and it turns out that this ball experiences ten times less drag than a solid object with the same shape.

It looks simple, but it isn’t. This experiment requires a very particular set of conditions, and the team has spent years understanding its theoretical basis.

It starts with the ball, or to be specific, two balls.

“There are two ways we can create these gas layers,” says Professor Derek Chan, a mathematician from the University of Melbourne, and one of the study leaders.

“The first is to heat a metal sphere to a very high temperature, and the second is to use a superhydrophobic surface.

“When the ball hits the water it boils a small amount of water immediately around it, creating a layer of water vapour. At the right combination of ball and water temperatures this layer becomes stable, so the ball is completely encased in the gas. We call this a Leidenfrost state.”

This is the ‘inside out’ version of the phenomenon most cooks would regularly see when they add small amounts of water to a very hot pan, and the water droplets skitter across the pan, because they are elevated by a vapor film sustained by the hot surface.

The second kind of ball works by repelling the water around it. Hydrophobic literally means ‘water hating’. Think of water beading and running off a Goretex jacket. And when something is superhydrophobic, that hatred runs deep.

The ball is coated in a product called Glaco Mirror Coat Zero, it’s actually sold as a spray-on water repellent coating for side mirrors on cars. It is so effective at repelling water that under the right conditions the ball maintains a layer of gas between itself and the water even when completely submerged.

“The benefit of the superhydrophobic coating is that it works in water at room temperature,” says Professor Chan.

Dr Ivan Vakarelski and Professor Sigurdur Thoroddsen, who lead the King Abdullah University part of the team, say there are a lot of ways to reduce drag.

“Dimples on golf balls is one example, as is the pattern on a shark’s skin,” says Dr Vakarelski.

“Releasing air bubbles in front of an object moving in water can significantly reduce drag, as can using a hydrophobic surface.”

Professor Thoroddsen says the idea behind all of these strategies is to change the way the fluid – such as water or air – flows around the object, particularly right next to the object, at what is called the boundary layer.

“In our previous experiments, we got stable gas layers around these balls, but they were less than 1 millimetre thick,” he says.

“This helped to reduce the drag by 10 or 20 percent, but this wasn’t enough, so we started to think of ways to create a bigger bubble around these balls.”

They started dropping the balls from various heights, and found that at just the right range of heights, a large gas cavity was created around the ball, and this shape was maintained as the ball sank through the water.

Dr Evert Klaseboer of the Institute of High Performance Computing and Professor Chan who did the theoretical analysis and modelling are excited by how this discovery has taken a purely theoretical concept and made it real.

“There’s a well-known theory in this field, that the drag force on an ideal object, with a free-slip surface, will fall to zero,” says Dr Klaseboer.

“This is the well-known d’Alembert’s Paradox and our result is a 21st century realisation of an 18th century theoretical result.

“In the study of fluid dynamics, we’ve always used a hypothetical sphere because we haven’t been able to create an object with a free-slip surface – until now.

“The motion of balls, like the aforementioned golf ball, is impossible to predict with a mathematical formula because of the chaotic action of turbulence, but the sphere-in-cavity has no turbulence and can be described by very simple equations. It could become a textbook example of some fundamental hydrodynamic theories.”

This research has important implications for the development of energy-efficient marine vehicles.

“Current technologies rely on the injection of gas bubbles near the hull,” says Professor Chang.

“Also under development are vehicles that have a superhydrophobic surface that can naturally sustain thin air layers.

“These technologies can achieve 10 or perhaps 20 per cent drag reduction, while our experiment demonstrates that for the best case scenario, an order of magnitude reduction is possible.

“This now sets the target for future research in this area.”

This article originally appeared at Pursuit and is republished here with permission. Read the original story. Pursuit is the University of Melbourne's multi-media platform, showcasing the latest research and opinion from world-leading experts.