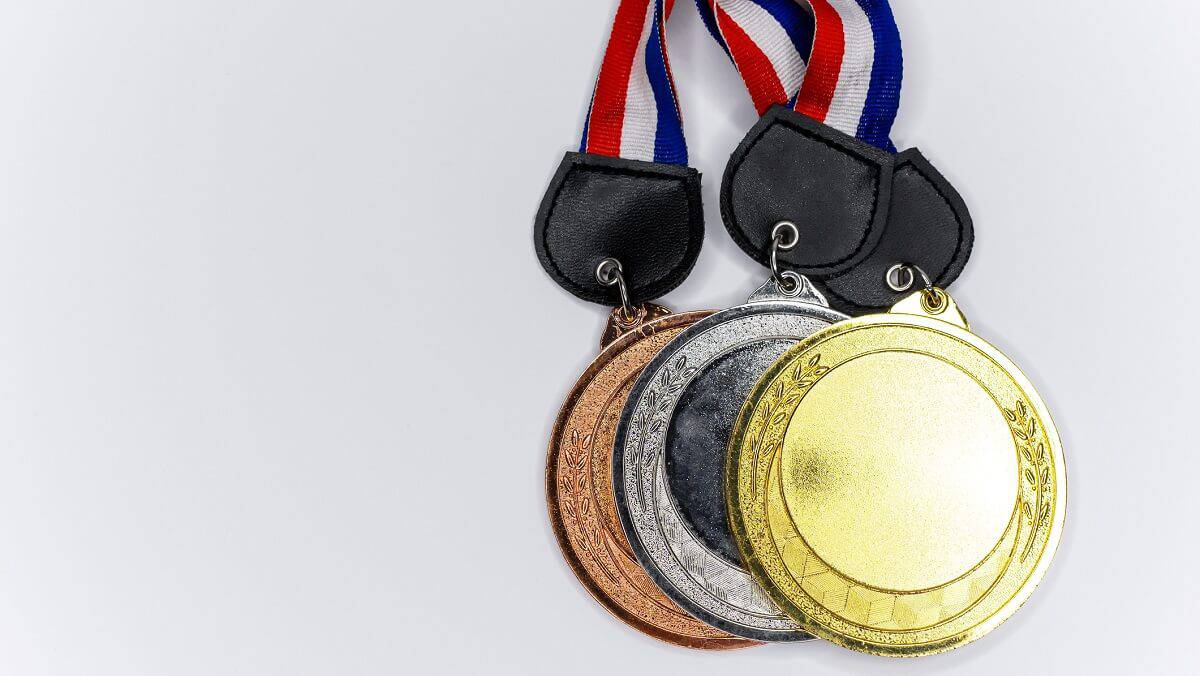 Grab your beers and put your thinking caps on, because it’s time for the Cosmos Big Olympic Quiz – but don’t expect it to be easy, because this is unlike any Olympic quiz you’ve done before.

Could someone bring all of Australia’s gold medals home in their carry-on luggage?

Australian athletes have won 17 gold medals so far, which weigh around 556 grams each, which is 9.5kg. Altogether, they’ve won 23.2 kilograms worth of medals.

That means a person wouldn’t be able to take all the gold medals on a Jetstar or Virgin flight as carry-on luggage. They would be okay to take them on a Qantas flight, though. Whether they could take them into space is unknown, with Virgin Galactic space flights yet to announce their baggage restrictions.

How long would it take for an Olympic marathoner to run to space?

A marathon is 42.195km, so it would take a relay team of three athletes to run vertically into space. Eliud Kipchoge, who won gold for Kenya, ran the marathon in 2:08:38, and the silver medalist, Abdi Nageeye of the Netherlands, and bronze medallist Abdi Nageeye of Belgium were both over the line within 2 minutes.

If the three of them formed a relay, they could get to the Kármán line in a little over five hours.

How many gold medals can Hidilyn Diaz lift?

Hidilyn Diaz, who claimed the Philippines’ first gold medal with her win in the 55-kilogram weightlifting with a clean and jerk lift of 127 kilograms, can lift 228 gold medals (two thirds of the total gold medals to be awarded at these games) or, if you prefer, a sizeable ostrich.

If all the women in the weightlifting 87-kilogram and 87-plus-kilogram finals worked together, they could lift a literal tonne. If they coordinated a synchronised clean and jerk lift, they could raise a walrus, a cow, or a couple of southern right whale testicles.

Which contained more people: the French Army at the battle of Waterloo, or the Tokyo Olympics?

The Olympics, despite the decreased crowd capacity due to the COVID-19 pandemic.

Napoleon led 72,000 French troops against the British, Prussians and their allies at the battle of Waterloo in 1815.

How many gold medals can Wojciech Nowicki throw a hammer over?

Wojciech Nowicki of Poland threw his hammer more than 82 metres in to win a gold medal in the hammer throw. That’s the length of 931 gold medals side by side.

It is also longer than the wingspan of a 747 plane, and means Nowicki could theoretically score a goal with his hammer from the beyond three-quarter mark of a soccer pitch.

Who has the most medals per capita?

Then we get to the top performers per capita.

New Zealand has won 4medals per million people, which is higher than Mongolia, Netherlands, Slovenia and Kosovo, which all have around one medal per million. Technically, Australia beats the others at nearly 2 medals per million, which means you are slightly more likely to win an Olympic medal for Australia than you are to die from an AstraZeneca shot.

But it’s Bermuda that’s the top dog, with a proportion of 16 gold medals per million people!

True, Bermuda’s single gold medal represents a population of 64,000, but that’s still the highest gold medal tally per capita of any country in the Olympics.

San Marino has the highest number of all medals per capita. Its silver and bronze medals represent 66.6 medals per million people.

Statistically, who was the most unlikely athlete to win a gold?

There have been many underdogs and an unprecedented number of dead heats in Tokyo events (especially in swimming), but South Korean gymnast Shin Jea-hwan only just made it into the Olympics by having a dead-heat win in qualifiers and then did the same again to win a gold medal in the men’s vault.

This happens in gymnastics when two athletes get the exact same score. However, because the scores are calculated by difficulty and execution, the winner in a tied situation is the gymnast who did the most difficult routine.

So not only are dead heats very rare, but the double-dead-heat nature of this gold is so rare that…well, it’s easier to go to space (provided you’re a billionaire or a marathon runner).

Who would win: Emma McKeon or a bull shark?

That depends on the race.

One of Australian Emma McKeon’s four swimming gold medals came in the 50-metre freestyle, where she swam at a speed of two metres per second. In a race, this would be fast enough to beat a carp…

It isn’t really fair, however, to compare animals of different sizes, so consider that Emma McKeon is only slightly taller than a bull shark is long, and the shark can swim at around seven metres per second. But I bet it can’t run as fast as Emma.

How many atoms in a silver medal?

Which timeframe is longer: the reign of Elizabeth I or the age gap between the oldest and youngest athletes at the Olympics?

At 66 years of age, Australian equestrian Mary Hanna is the oldest athlete at the Olympics, and Syrian table tennis player Hend Zaza is the youngest at just 12 years of age – an age gap of 54 years.

Why are the three medallists for women’s street skateboarding the answer to everything in the Universe?

The three medallists were Momiji Nishiya of Japan, Rayssa Leal of Brazil, and Funa Nakayama of Japan, who are 13, 13 and 16 years of age respectively.

That means their combined age is 42, the answer to life, the universe and everything.

It’s also the age of Kiwi weightlifter Laurel Hubbard, the first transgender woman to compete in the Olympics.

Originally published by Cosmos as The Cosmos Big Olympic Quiz