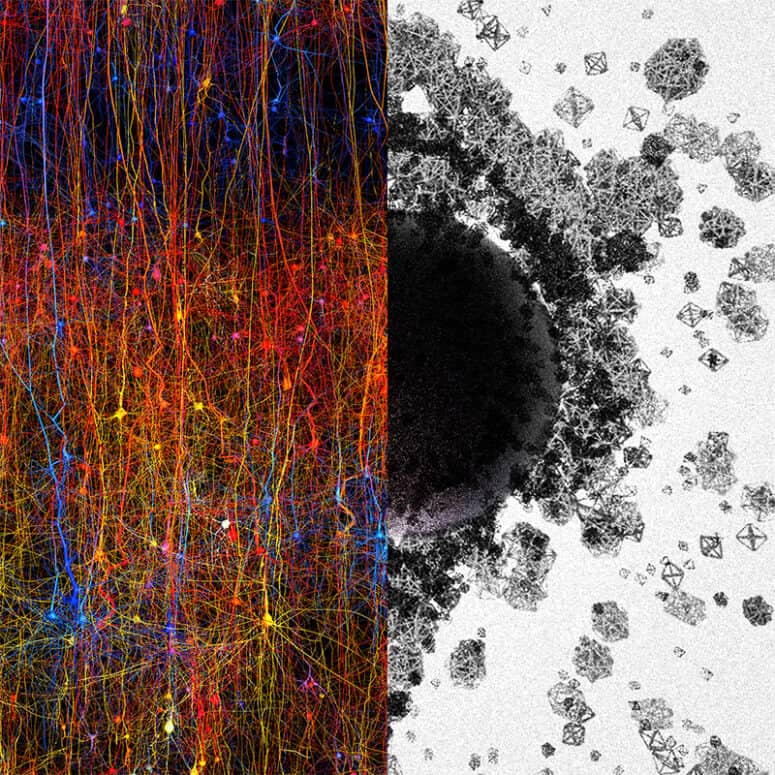 A digital image of part of the neocortex (left) and shapes of different sizes and geometries representing structures ranging from 1 dimension to 7 dimensions and beyond. Credit: Blue Brain Project

When working on a problem, neurons in the brain form into “a multi-dimensional sandcastle that materialises out of the sand and then disintegrates”, according to researchers at the Blue Brain Project – a collaboration of neuroscientists and mathematicians based in Geneva, Switzerland.

In a paper in the journal Frontiers in Computational Neuroscience, the researchers reveal mathematical modelling that shows the brain constantly forms temporary structures that exist in multiple dimensions.

They suggest that existing investigations intent on uncovering the fine grain of neuron interaction are to a significant extent hampered because the mathematics applied is insufficient to detect these high-dimensional bits of architecture.

The Blue Brain Project’s principal research tool is a detailed digital model of the neocortex, which was completed in 2015. The neocortex is responsible for the brain’s higher-level activities.

The project team uses mathematical approaches to interrogate the ways neurons interact in the digital brain tissue – and then experiment on real tissue to test their findings.

In the latest research mathematicians Kathryn Hess and Ran Levi used a complex approach known as algebraic topology to investigate how neocortical neurons operate when stimulated.

“Algebraic topology is like a telescope and microscope at the same time. It can zoom into networks to find hidden structures – the trees in the forest – and see the empty spaces – the clearings – all at the same time,” explains Hess.

The results were astounding. They revealed that while cells in every other organ in the body work in four dimensions – three spatial, and the fourth being time – the brain works routinely in seven and sometimes up to eleven.

The process starts with the formation of a “clique” – a set of neurons that connect together in specific ways to form a precise object. Contributing neuroscientist Henry Markram says “there are tens of millions of these objects even in a small speck of the brain”.

A clique, however, is primarily a common or garden four-dimensional entity. The fun starts – and the mathematics start to get eye-wateringly complex – when they begin to join together.

They do this, in a flash, when the brain is presented with an appropriate stimulus. The cliques accumulate, forming in their midst cavities, which appear to be critically important.

“The appearance of high-dimensional cavities when the brain is processing information means that the neurons in the network react to stimuli in an extremely organised manner,” says Levi.

“It is as if the brain reacts to a stimulus by building then razing a tower of multi-dimensional blocks, starting with rods (1D), then planks (2D), then cubes (3D), and then more complex geometries with 4D, 5D, and so on.”

The next question for the Blue Brain Project to resolve is whether there is a link between the increasing complexity of the multi-dimensional “sandcastles” and the intricacy of the outcomes involved.

Using algebraic topology to map brain function is still in its early days, but already, the authors suggest, it might have provided a clue to one of the biggest mysteries of brain function: where and how memories are stored.

“They may be ‘hiding’ in high-dimensional cavities,” Markram speculates.

Related reading: Lighting up the brain