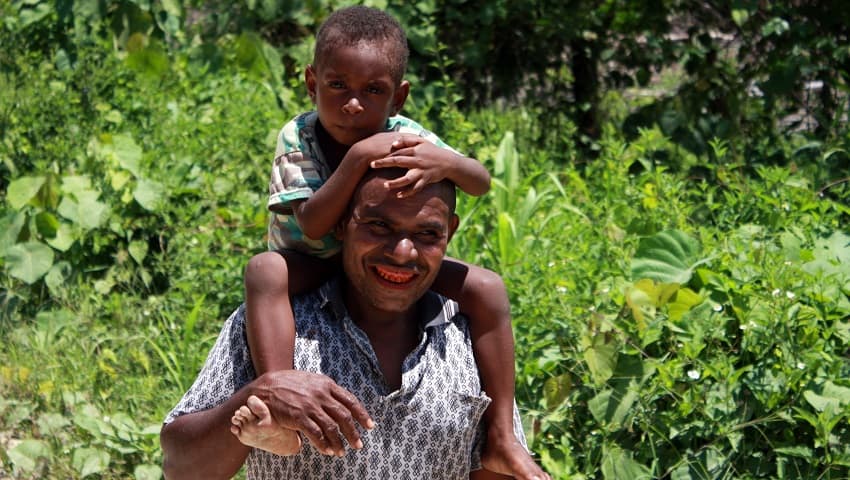 Melanesians are known to have some of the highest rates of ancestry from our now-extinct archaic human relatives. Credit: Mangiwau

People living on the islands of Melanesia have inherited large slabs of DNA from Neanderthals and Denisovans, according to a new analysis.

The study, published in the journal Science, specifically looked at large-scale structural changes to genomes of people around the world that trace to our ancient relatives, rather than mutations that cause single-letter changes to the genetic code.

That took them to Melanesia – a region of Oceania stretching eastward from Papua New Guinea.

Melanesians are known to have some of the highest rates of ancestry from our now-extinct archaic human relatives. Around 3-5% of Melanesian genomes comes from ancient pairings with Denisovans and another 1-3% from Neanderthals.

Structural changes – called ‘copy number variants’ (CNVs) – include duplications, deletions or rearrangements of large stretches of the genome. Advances in sequencing technology that allow long sequences to be read has only recently enabled this type of genomic variation to be identified.

“Size matters,” says geneticist Evan Eichler from the University of Washington in Seattle, who led the study. If the new CNVs are harmful, he says, they are quickly weeded out. But the ones that stick around are potentially useful.

Eichler’s team identified 37 CNVs in their Melanesian sample. Nineteen of these were from archaic humans.

All seem to be the result of positive selection. In other words, they hung around because they were beneficial, although what those benefits might be are yet to be determined. Sequences in the vicinity include genes involved in metabolism, development and immune responses.

The team describe two of the most complex CNVs.

The first, a Denisovan-derived sequence, is a duplication located on chromosome 16 that is more 380 thousand base pairs long. Most modern humans lack the sequence entirely. But it is present in 79% of Melanesians.

“That magnitude of change for something that’s risen to such a high frequency is really unexpected,” says Eichler.

The team estimate that the region first appeared in the Denisovan genome half a million years ago and then ended up in the ancestors of modern-day Melanesians when the two groups interbred 60,000-170,000 years ago.

The region has been a hotspot of genome duplications in both Denisovan and Homo sapien lineages, says Eichler. “It’s as if there was like a vacancy sign here saying we’re open for business for duplications.”

The Denisovan duplication lies directly adjacent to sequences that have been associated with the cause of about 1% of autism cases.

The second region, which crossed into non-African humans from Neanderthals 40,000-120,000 years ago, consists of a 6,000 base-pair deletion and a 38,000 base pair duplication that is now carried by 44% of Melanesians. The changes effectively splice together ancient human and archaic genes into a new combination.

The affected genes include one that has been implicated in brain development.

“The area of structural variation is pretty understudied, even in a modern medical setting,” says computational biologist Murray Cox from Massey University in New Zealand, who was not involved in the study.

Cox, who has studied Denisovan sequences in Melanesians, says that looking for structural changes that come from archaic hominin sequences is “really novel.”

The next step will be to find out what the upshot is – if any – for modern-day Melanesians.

“One thing that would be very interesting is now to go back and see if they are associated with any traits – both positive and negative – that may be contributing to disease risk in the Melanesians.”

It’s entirely possible that the sequences were important sometime in the past, but no longer have any influence on disease risk in modern populations. Further analysis is needed to tease that out.

And that, says Eichler, requires a far greater diversity in reference genomes. “We need representation across the board, in all human populations.”

Originally published by Cosmos as The afterglow of archaic human pairings