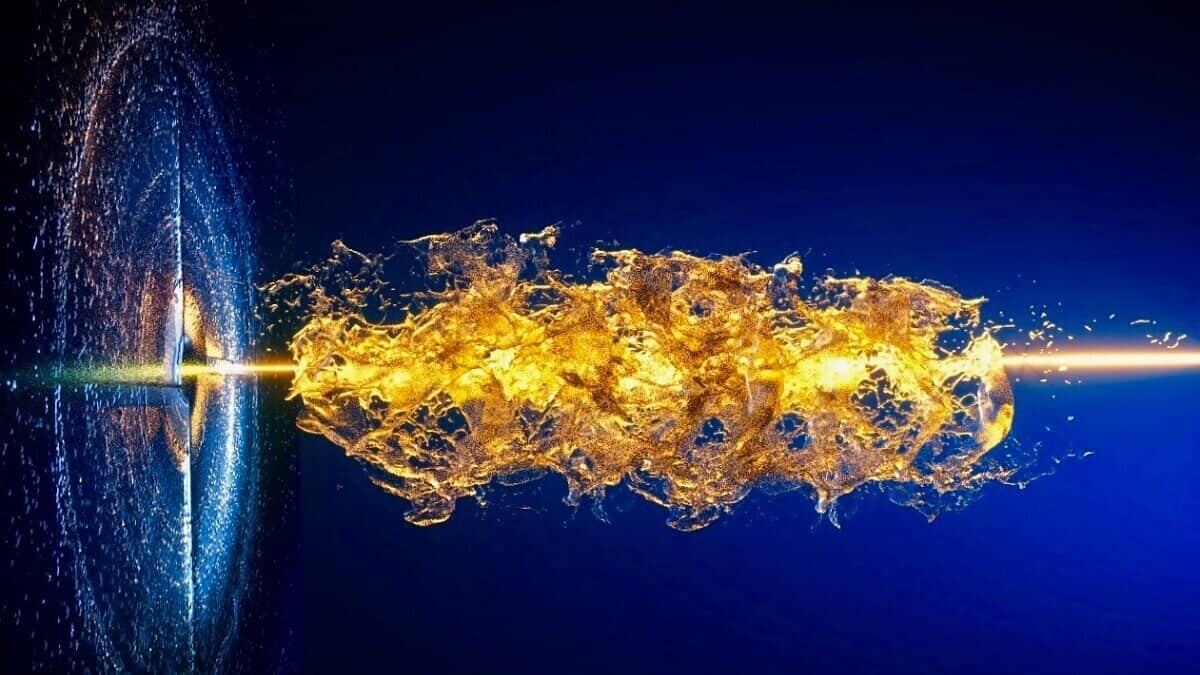 A artist's impression of the X-ray crystallography technique. The X-ray beam passes through a jet of liquid in a fraction of a second, collecting diffraction data. Credit: Ella Maru Studio
More on:
analytical chemistry

How do we know that DNA is a double helix, or that coronavirus spike proteins are spike-shaped? One technique – X-ray crystallography – can take a lot of the credit. And a team of US scientists have just found a way to make it even more effective.

Their technique is described in a paper in Nature.

X-ray crystallography, as the name implies, involves firing X-rays at crystals of a substance to find out how its atoms are arranged. It’s a powerful technique for learning about molecules of all shapes and sizes, and has been particularly useful for learning about proteins and other biomolecules. It was Rosalind Franklin’s X-ray photos of pure DNA crystals that led to the discovery of their structure, for instance.

But X-ray crystallography, as you might expect, needs crystals to work. Without molecules sitting in large, ordered structures like crystals, the X-ray data is too chaotic to interpret. This means that it’s much harder to learn about the many, many substances that don’t crystallise easily.

Sauter and colleagues have developed a new technique, called small-molecule serial femtosecond X-ray crystallography (or smSFX), which can overcome the powder problem.

The technique combines crystallography with a series of custom-built computer algorithms and an additional, extra powerful X-ray laser. This laser, called an XFEL (or X-ray free electron laser), is faster and more focussed than traditional X-ray crystallography methods.

“The idea is that the crystal is going to explode instantly when it’s hit by this beam of photons, but with a femtosecond pulse, you collect all the diffraction data before the damage occurs. It’s really cool.”

The algorithms then process this diffraction data from thousands of different microcrystals, all aligned differently, into a consistent image. The whole process takes a few quadrillionths of a second.

This technique, unlike old-school crystallography, can also be done in more lenient conditions. “No fancy vacuum chamber required,” says Sauter.

The researchers demonstrated their technique by using it to determine the structure of two previously elusive materials, both from a class of substance called chacogenolates. Chacogenolates, made from a combination of metals and organic molecules, could become useful catalysts and semiconductors.

“Now that we can solve these hard-to-crystallise structures, we can design the best structures for our purposes,” says Nate Hohman, a chemical physicist at the University of Connecticut, US.

One of the chacogenolates they examined, made from selenium and silver, glows blue under UV light – or, says Hohman, “whenever grad students are around”. It’s been named mithrene, in reference to the substance mithril, from The Lord of the Rings.

It’s hard to imagine a chemical serving a better purpose than that, but the researchers are confident their new technique will be able to find it.