Home ■ Core Sciences ■ Chemistry ■ Inside Syria – the search for sarin 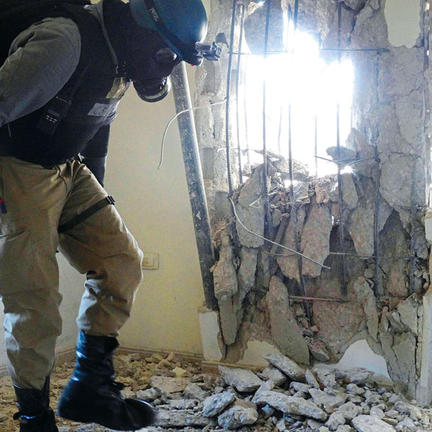 Not all chemists wear white coats. Some wear flak jackets, heavy boots and military helmets. And this August, Åke Sellström and his team were very grateful for the gear as their convoy of white Toyota Land Cruisers, emblazoned with UN markings, was hit by sniper fire while edging across Damascus.

Clearly this was not a typical science field trip. Hidden marksmen peppered the team’s convoy as they crossed the tense buffer zone separating government- and rebel-controlled territory in the Syrian capital. The scientists were heading east, toward the rebel-held area of the Ghouta region near Damascus where, on 21 August – just five days earlier – a large-scale chemical weapons attack allegedly took place.

Hundreds were killed. Video footage was graphic and grim. Without a mark on them, victims convulsed uncontrollably and gasped for air, fighting and often quickly losing the battle to breathe – all hallmarks of nerve agent exposure. Sellström’s important mission was to make sure. Whatever politicians decide, be it military strike or diplomatic solution, the scientists’ job is to make sure they have all the facts.

Alastair Hay, a toxicologist at the University of Leeds, UK, has a good notion of what Sellström experienced. In 1992, he was part of a mission into Iraq to find evidence of nerve agents in the bombs Saddam Hussein used to kill thousands of Kurds on the country’s northern fringe. Although the team arrived four years later, the samples they took from bomb craters tested positive for mustard gas and sarin. “They were still present in the environment, so I think the UN team in Syria has a good prospect of coming up with a positive result,” he said.

Sellström’s timely arrival was a great advantage, and fortunately the team survived to tell its tale. Despite losing the lead Land Cruiser, nobody was hurt in the sniper attack. Switching vehicles, the scientists continued their work, reaching Al-Moadamiya town where the alleged attack took place.

Video footage of the attack would have given the scientists a good idea of what to look for even before they left their hotel rooms, says Martin Boland, a research chemist at the University of Melbourne’s pathology department. The symptoms seen in the victims at Ghouta are characteristic of exposure to sarin or a closely related nerve agent. It might also have been possible to see if their pupils were contracted, another telltale sign.

Just a pinhead-sized drop of this volatile liquid, inhaled or
absorbed through the skin, is enough to kill.

Sarin is a member of a family of chemicals called organophosphates, best known for their use as pesticides. Malathion, for instance, known as maldison in some parts of the world, is a commonly used relative as it is considered of low toxicity to humans.

In the late 1930s German chemists at IG Farben stumbled upon sarin while trying to develop better pesticides. But sarin, odourless and fast-acting, proved exceptionally potent against people. Its potential was quickly recognised by the Nazi government, which stockpiled the chemical but never actually deployed it in the battlefield.

Sarin, like the pesticides, works by jamming the nervous system, binding to and blocking the enzyme acetylcholinesterase that the body uses to stop nerve signals. Without this enzyme, nerves and the muscles that they stimulate are stuck in the “go” position. Victims are unable to release their diaphragm to exhale and asphyxiate. Just a pinhead-sized drop of this volatile liquid, inhaled or absorbed through the skin, is enough to kill, says Hay.

Arriving on site, the inspectors donned respirators before crunching out through the rubble-strewn, bombed-out buildings where the alleged attack took place. Eyes trained on the ground, they likely searched for possible fragments of the munitions, says Hay.

“This is where concentrations of the agent would be greatest,” he said.  Every sample would be collected and documented by written record, photograph and video, and GPS position. The inspectors would also wave a spectrometer over the area, trying to detect the chemical signature of sarin.

But these gadgets only guide the inspectors, they cannot prove the presence of sarin. For that, samples need to be collected for the sophisticated machines used by forensic labs. As Hay’s investigations in Iraq showed, these can detect traces of sarin in soils years after a release.

Leaving the attack site, the investigators drove to nearby hospitals for the next stage of their investigations: collecting samples from the survivors and the dead. They were well within the four- to six-week window for detecting sarin in the hair, blood and urine. Although sarin breaks down rapidly in the body, it is converted into a long-lived product called isopropylmethylphosphonic acid (IPMA) that sticks to the albumin proteins in blood. It is a unique marker of sarin exposure.

By 31 August, the inspectors had taken all the clinical samples and completed interviews with doctors and witnesses. But their work was far from done. Quitting Syria, they hastened back to base at the Organisation for the Prohibition Of Chemical Weapons (OPCW) in The Hague, Netherlands. Here, the meticulous process of sample analysis could finally begin. Each sample would be split up to three ways, and sent to one of up to 20 approved labs around the world. In a case like this, there is zero tolerance for laboratory error.

The samples are analysed by a two-step technique called gas chromatography–mass spectrometry (GC-MS). The first separates the sample into its components; the second identifies them.  These tests are highly sensitive and extremely reliable – but take several weeks to complete, said Hay. “This is the OPCW’s first major test of this kind, so it is being absolutely scrupulous about what it does, because it doesn’t want anybody to be able to say that it failed in any way.” A potential war concentrates the mind.

By 17 September, the UN was able to confirm Sarin had indeed been used in Syria.