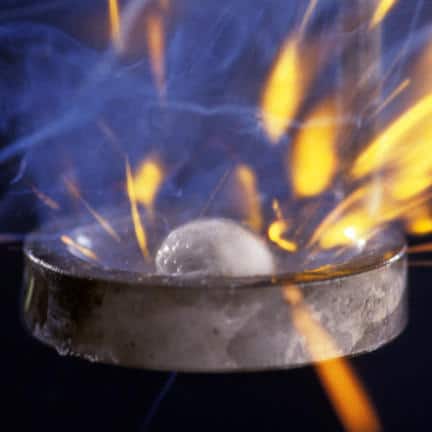 There’s nothing like an explosion to help you learn chemistry. Remember when your high school teacher dropped a lump of sodium into water? Bang! Lesson learnt: sodium is highly reactive.

But it turns out there’s more to that lesson. In a paper in Nature Chemistry, Pavel Jungwirth, Philip Mason and their colleagues at the Czech Academy of Sciences in Prague report that the textbooks are not quite right.

The Czech team had an enduring problem with the sodium lesson. A good explosion requires that the ingredients become intimately mixed up together, and then keep on mingling. But, as Jungwirth explains, “sodium in water is exactly the opposite”. As soon as the lump of metal hits the water, it is instantly enveloped in a cloud of hydrogen gas and steam that should cut the sodium off from the water and stop the reaction – but it doesn’t.

“So we’ve seen these explosions, everybody’s seen them, and they shouldn’t happen!” says Jungwirth. “So we thought ‘wow, there must be some other mechanism’.” One summer the team pondered the reaction while combining work and play, as they spent Saturday afternoons creating “booms on the balcony”. And those lazy Saturday afternoons paid off.

Chemistry teachers love to use the sodium-water reaction when they are teaching students about the periodic table. Elements are grouped according to their properties. In the far right hand column of the table are the noble gases, stable and unreactive thanks to their full complement of orbiting electrons. Sodium on the opposite side of the table has the opposite properties. Its single outer electron makes the metal highly reactive and ready to combine with others at the first opportunity – such as the moment the metal hits water.

Jungwirth had to try and “catch the sodium metal in flagrante, so to speak, before the chemical explosion”

According to the textbooks, these reactive electrons rip apart the surrounding water molecules to release hydrogen gas and heat. After a moment or two, the growing cloud of hot hydrogen ignites, giving the reaction its characteristic bang. But, as Jungwirth wondered, why isn’t the reaction smothered by the gas before it can generate an explosion?

Jungwirth hypothesised that not only the water is affected by the escaping electrons. Without its negative charges, the positively charged sodium lump suddenly finds its own company highly repulsive. Like hairs standing on end, sodium spikes erupt across the metal’s surface as sodium atoms strain to escape each other. These hairy spikes end up vastly multiplying the surface area, ensuring the sodium stays in contact with the water despite all the smothering gases billowing out.

To prove his theory, Jungwirth had to try and “catch the sodium metal in flagrante, so to speak, before the chemical explosion”. For that, the team calculated they’d need to record the reaction at 10,000 frames per second. “That’s a pretty expensive camera, about $50,000, which we were not ready to sacrifice,” says Jungwirth. “But the company [scientific equipment makers Imaging Solutions] was willing to lend it to us for $1,000 per week. The important part was not to tell them what we planned to do with it!”

The camera survived the experiment and proved Jungwirth correct. “The moment it touches the water, within 100 microseconds, it becomes a hedgehog – and then boom, the explosion,” says Jungwirth.

The team plans to turn their footage into an educational YouTube video so today’s chemistry students can learn the truth about what happens when sodium hits water.

For such a well-known reaction, it’s a surprise nobody had spotted this hole in the explanation before, says University of Sydney chemist Siegbert Schmid, who specialises in chemistry education. “I would use it as an example that chemistry isn’t dead, that not everything is understood – even things thought to be true for a long time may not necessarily be so, and with improved instrumentation we can see more and understand better.”

Originally published by Cosmos as Why sodium explodes in water