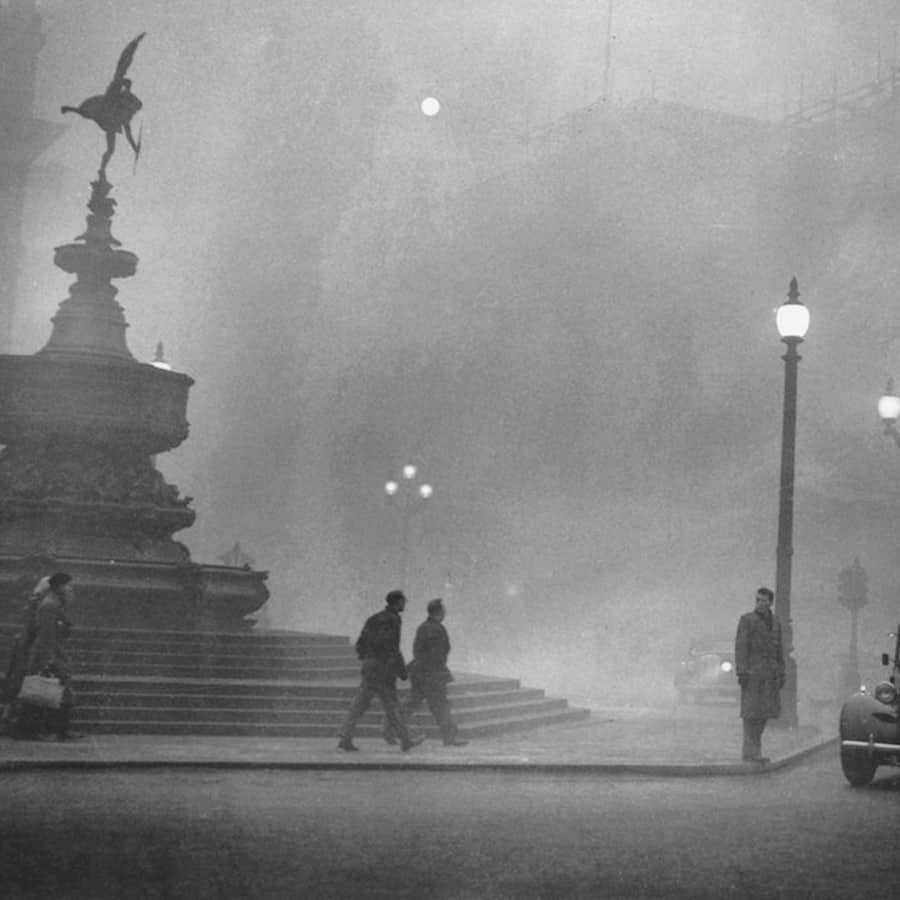 Asthma is a chronic respiratory condition with no known cure. It impacts people of all ages through episodic constrictions of the airways, which may be even worse than it sounds. Approximately 334 million people worldwide suffer from asthma, including 24 million Americans and 5.4 million residents of the U.K., and the average annual cost of each case has been estimated to be between $US2,300 and $4,000.

Our understanding of the triggers of acute asthma episodes – often called “asthma attacks” – has developed significantly in recent years, and techniques for managing asthma over the long term have also advanced. Yet the number of people who suffer from asthma continues to grow, and we still don’t know what causes the condition to develop in the first place.

In a recent study, my coauthors and I used an unexpected exposure to a major air pollution event – the Great London Smog of 1952 – to demonstrate that air pollution exposure in early life leads to higher incidence of asthma during both childhood and adulthood. While London’s air is much cleaner today than it was 60 years ago, our findings have major implications for the many countries that continue to struggle with high levels of urban air pollution.

The Great Smog took place in London over five days in early December 1952. During that time, a layer of warm air settled over the city, trapping colder air near ground level. The cold air drove Londoners to pile coal on their fires to keep warm, and the upper layer of warm air trapped the resulting smoke near the ground where it mixed with a heavy fog.

The smog that resulted was so thick in places that visibility was said to have fallen to 12 inches. Bus, airplane, taxi and other services were halted, and drivers who braved the roads were forced to rely on others to walk ahead of the vehicle, calling out instructions and warning pedestrians. More than 100,000 people were treated for pneumonia or bronchitis, hospital wards filled to overflowing and morticians reported an inadequate supply of coffins in which to store the dead.

Ultimately, some 3,000 to 4,000 “extra” deaths – that is, deaths above the normal rates which are attributed to the abnormal conditions – occurred during the Great Smog. Approximately 8,000 more cardiac and respiratory deaths over the next several months have also been linked to the smog. The toll of the Great Smog was so large that it ultimately served as a major impetus for the passage of the 1956 and 1968 U.K. Clean Air Acts.

The link to asthma

This difference-in-differences approach controls for the higher rates of asthma that are generally prevalent among city-dwellers. It also accounts for any changes in asthma rates that occurred both within and outside the area affected by the Great Smog around the time of the event, such as general trends in asthma rates and diagnoses.

In our analysis, we found that people who were exposed to the Great Smog during the first year of life were four to five times more likely to develop asthma as a child and three times more likely to report asthma as an adult compared to baseline rates. We also found evidence suggesting that children who were exposed to the Great Smog in utero suffered twice the normal rate of childhood asthma. Our results indicate that early exposure to air pollution has significant long-term impacts on health, and contributes to the development of asthma.

Our approach treats the Great Smog as a natural experiment, allowing us to rule out many alternative explanations for observed increases in asthma rates. This framework reduces the range of factors that could be contributing to the increased rates of asthma among those exposed at early ages and allows us to convincingly link exposure to the Great Smog during the first year of life with higher incidences of asthma in both childhood and adulthood.

The importance of early exposures

While air pollution is known to trigger asthma attacks, neither short- nor long-term exposures have previously been linked so clearly to the initial development of the condition. By demonstrating the connection between early air pollution exposure and the later development of asthma, our findings fill an important gap in our understanding of the condition, and provide actionable information for doctors, policymakers and parents.

Our results suggest that reducing exposure to extreme air pollution events, especially among the young, may be an effective means of combating the initial development of asthma. By improving air quality and protecting young children from air pollution, policymakers and doctor/parent teams may be able to meaningfully reduce the likelihood of asthma in individual children and the incidence of asthma in the population as a whole.

Our findings also dramatically illustrate the long-term effects of air pollution exposure. While there is a strong consensus that exposure to air pollution negatively affects health, our work presents some of the first evidence that such exposure has lifelong consequences. The London Smog took place more than 60 years ago, but some of those that lived through it are still feeling its impacts today.

Such long-term effects have ominous implications for the millions of people around the world who are exposed regularly to extreme air pollution. In a recent article, Douglas Dockery and Arden Pope – two of the foremost researchers on air pollution and health – noted that conditions during a 2013 air pollution event in Harbin, China were “remarkably similar to those from London during the 1952 Great Smog.”

Unfortunately, such extreme air pollution is both a widespread and growing problem. Beijing suffered some of its worst recorded air pollution at the end of 2015. And for all of the attention that air quality in China has received since the Beijing Olympics, none of its cities even makes the list of the top 20 most polluted in the world. Much of the urban population in emerging Asia, the Middle East and Africa regularly face more extreme levels of air pollution. Our results suggest that the negative health impacts of these exposures will last for many years to come.

Originally published by Cosmos as What causes asthma?