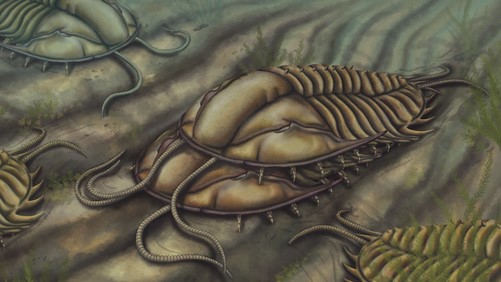 The survival of a lineage of animals often comes down to reproductive strategies. But with soft tissue preservation rare, palaeontologists struggle to find reproductive structures of extinct taxa, especially if they don’t know what to look for.

But in a bright day for trilobite research the right such fossil has just been found. Scientists from the University of Harvard recently published a description in Geology, revealing the likely mating behaviour of the mid-Cambrian trilobite Olenoides serratus.

“This is one of those rare instances where you can tell the sexes apart in a fossil species. This is often impossible for palaeontologists to do, who are looking for anatomical differences to identify sexual dimorphism. With this specimen you can actually say, this is probably a male,” says Professor John Paterson of the University of New England, one of Australia’s leading trilobite specialists.

Trilobites dominate the fossil record, with over 20,000 species described spanning a time of 520-250 million years ago. They are likely related to the chelicerates (horseshoe crabs, spiders, and scorpions) and the mandibulates (centipedes, crabs, and insects). But while trilobite morphology has been studied heavily, little is known about their reproductive organs – until now.

“Trilobites are arthropods – joint-legged animals, the most diverse biodiverse group of organisms alive today. Arthropods are also renowned for modifying their jointed appendages for reproduction; for instance spiders use antennae-like pedipalps to transfer sperm. It is not surprising that trilobites also found novel ways to use their limbs for mating,” says Professor Michael Lee of the South Australian Museum.

The discovery was made by PhD candidate Sarah Losso, who discovered unusually modified clasper-like legs around the mid-body of a well-preserved specimen from the Burgess Shale, housed in the Royal Ontario Museum. Losso then examined a total of 65 specimens with preserved appendages. While 23 had legs, none had a clear view of the claspers. Because this specimen was missing half its exoskeleton, its claspers were revealed, to the fortune of trilobite researchers everywhere.

“This specimen is truly unique in that it is well preserved enough to show the exceptional details of the limbs modified into claspers, but broken so we can actually see these reduced limbs that would otherwise be covered by the dorsal exoskeleton,” says Losso. “Ironically, if the specimen were better preserved  … we would not have as much information about its limbs as we do now.”

Flinders University’s Professor John Long, whose expertise includes fossil fish sex, can relate. “When we discovered the first sexual dimorphism within placoderm fish Microbrachius, it was by sheer luck that the specimen was preserved in such a way that we could see the reproductive organs. Once we knew what we were looking for, we found hundreds of more examples in museums around the world.”

“The same is going to happen with this work on the trilobite.”

“It’s not surprising that the claspers have gone unnoticed. Trilobites have many segments, with many paired appendages, and usually when they are preserved, the pairs can be bunched up together, so it’s difficult to tell them apart. The claspers are also comparatively much smaller than the other appendages, so are probably often hidden by the larger walking legs. In this specimen, the way the rock has broken, the legs are splayed out perfectly and can be seen in great detail, revealing an additional pair of claspers,” explains Paterson.

“Also, articulated (complete) specimens of trilobites are quite rare. As trilobites are arthropods, their exoskeleton falls apart when they die, so we often just find bits and pieces of the body fossilised. This Burgess Shale specimen, with its articulated exoskeleton and soft appendages, was preserved under just the right conditions.”

Claspers are hook-like appendages often found in male arthropods, but also in male cartilaginous fishes, including sharks and rays. Different groups have convergently evolved this appendage by modifying different parts of the body, and function differently according to the female’s anatomy. While horseshoe crabs of the family Limulidae aren’t closely related to trilobites, they’re often used as a modern analogue because of their superficially similar anatomy. Horseshoe crabs mate by clasping onto the spines of the female. In the trilobite O. serratus, it seems male claspers line up with female spines as well.

“We knew it could not be for mastication because the appendages aren’t near the head or mouth – they’re in the middle of the body,” says Losso. “This shows sexual dimorphism in trilobites, but in this case it’s only expressed in the appendages. This tells us more about the reproduction in trilobites and how they would have mated, which previously has been hard to understand and has been very speculative based on modern analogies.”

“Modern aquatic arthropods have a suite of reproductive strategies, including sperm competition where the female can retain or reject from different mating partners,” says Long.

“This is a really fascinating study that opens whole new world of discovery into trilobite evolutionary success and reproductive diversity.”

Originally published by Cosmos as Trilobites clasp hands to copulate