Much like the Colonel Sanders’ 11 herbs and spices, zebrafish have a secret recipe of their own – one which allows their spinal cord regain full function after being cut.

A study by US scientists has revealed a key ingredient behind this impressive ability – a protein called connective tissue growth factor a (CTGFa).

The finding, published in Science, is a major step towards understanding how some animals such as fish and amphibians regenerate their spinal cord. It also provides a new research target for neuroscientists searching for ways to induce better cord recovery in humans.

When a human spinal cord is severed, glial cells, which protect and support nerve cells, effectively seal off the wound, forming a scar.

In zebrafish, though, these same cells proliferate, migrate and differentiate to form a bridge between two ends of the separated cord, providing a pathway for nerve cells to re-establish a communications link.

Analysis identified seven sites of interest. But the scientists took particular note of CTGFa because it was expressed during a key period when glial cells were actively constructing bridges across damaged tissue. 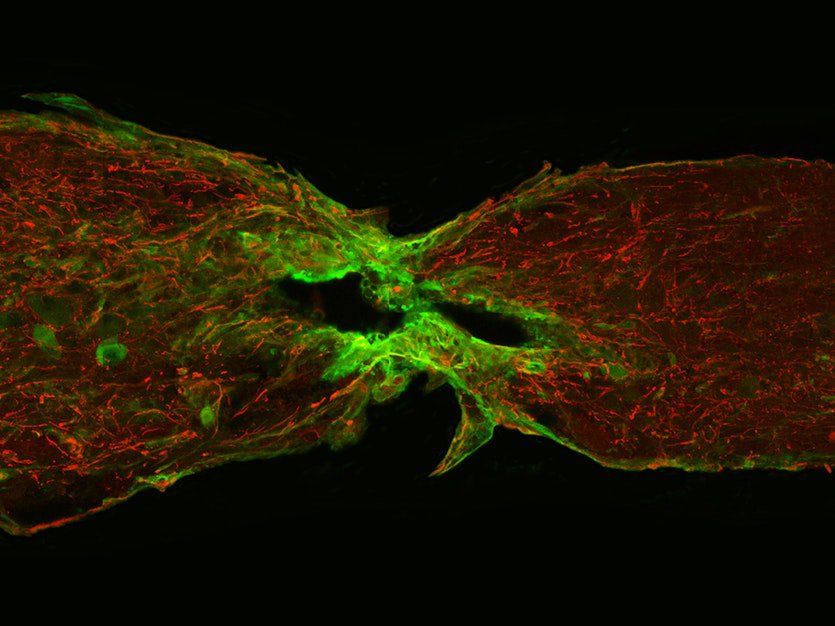 They also found that when CTGFa production in zebrafish was artificially accelerated they exhibited increased bridging, axon regeneration and overall healing compared to controls, while fish lacking in CTGFa failed to build the crucial glial cell bridges.

Humans produce only one type of connective tissue growth factor, while “lower” animals such as zebrafish and newts produce two: CTGFa and CTGFb.

When Mokalled and colleagues applied human CTGF to zebrafish wound sites, the fish showed signs of recovery similar to those of the controls. Why it doesn’t do the same trick in people is now a prime target for further research.

The significance of Mokalled’s team’s work is outlined in an analysis by neurologists Philip Williams and Zhigang He from Harvard University, also published in Science.

The pair suggests that if CTGF in humans can be made to more closely mimic the protein’s behaviour in zebrafish, it could lead to more effective strategies for spinal injury repair.

Along with colleague Yona Goldshmit, Currie first showed that spinal scar formation in mammals and bridge-building in fish both involve glial cells.

“I consider zebrafish a blueprint of how to design or build regenerative capacities in tissues and organs in ourselves that don’t have such a capacity,” he says.

“The really major point of this paper is that they have found a new tissue factor that regulates glial cell behaviour that potentially has a therapeutic application.”

Although the work of Mokalled and her colleagues is promising, anatomist Michelle Rank from Melbourne’s RMIT University says it is important to note that it identifies only a single step in the regenerative process of spinal tissue.

“If you imagine two ends of the spinal cord with a gap between them, the first problem is: how do you fill in that gap?” she asks.

“The second problem is: how are actually going to get neurons to grow across that gap? The third aspect of it is: if it can grow across the gap, how are they going to make sensible connections? This [study] is a significant step in the first part of the equation.”

Ranks suggests that in order to achieve the same kind of regenerative capacity in human spinal cords as zebrafish, scientists now need to isolate the cells that promote cellular bridging from the elements that inhibit the process.