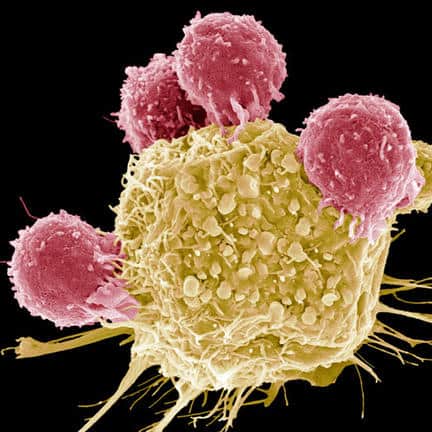 Immune cells known as T cells are formidable fighters against cancer and HIV. But they can be outsmarted by these foes. Now researchers at the University of California, San Francisco have figured out how to help T cells fight back using the latest gene editing technique called CRISPR. The method was published in Proceedings of the National Academy of Sciences in July. “This technique opens a lot of doors for the field,” says lead author Alexander Marson.

Scientists have been tinkering with genes since the early 1970s to create faster growing pigs or herbicide-resistant crops. But the techniques had poor precision. Tens of thousands of individuals had to be tinkered with to achieve the required edits and usually those edits would be inserted on the wrong pages of the DNA text.

Which is exactly what the CRISPR gene editing technique offers. It’s no surprise that since scientists first discovered CRISPR in bacteria three years ago, it has taken the world by storm. Microbes evolved CRISPR to edit viruses out of their DNA. Now it’s been used to precisely edit everything from the DNA of crops to editing the HIV virus out of human DNA. Last April, Chinese researchers used it to edit the DNA of a human embryo – a move that created a storm of controversy. Till now tampering with the DNA of an embryo was considered out of bounds.

But tampering with T cells is not likely to attract bad press. In particular, blood borne T cells form the major defence against viruses and cancer. Or when they misbehave, they cause auto-immune diseases such as Type 1 Diabetes. Controlling these cells by rewriting their DNA could mean a cure for incurable diseases. It’s all very doable: simply filter T cells from a person’s blood, edit their DNA and return them to the individual to do their job.

The challenge is delivering the CRISPR machinery into T cells. Usually it’s done by packaging CRISPR into a harmless virus that ferries it into cells. CRISPR itself then acts like a guided missile, homing in on a precise stretch of the DNA code. (The guide that targets the DNA is a small piece of RNA. The missile is a shredding protein called Cas 9.) But so far, getting this guided missile inside the cells has been at the very low end of precision and efficiency. If only a tiny percentage of T cells can be engineered to resist HIV or fight cancer, it might hardly be worth the effort.

‘The danger is to create something you can’t control.’

So Marson’s team tried brute force. They zapped T cells from healthy donors with an electric field. This made temporary holes in the cells’ membrane, big enough for the intact CRISPR machinery to pop through. They managed to edit the DNA in 20 percent of T cells, a “huge” leap in efficiency according to Marco Herold, molecular biologist at Melbourne’s Walter and Eliza Hall Institute of Medical Research.

Yet in contrast to their brute force entry, they were able to achieve very fine editing, changing individual letters of the cell’s DNA for the first time, as opposed to inserting or deleting large chunks. For instance they altered a doorway used by HIV known as CXCR4, so the deadly virus would not be able to enter and infect these T cells.

They were also able to edit a gene called PD-1. Its role is to tell T cells to lay down their weapons so they don’t for instance attack normal cells of the body. But crafty cancer cells have learned how to give this same command to PD-1, so the T-cells lay down their arms in the vicinity of cancer cells. By editing the PD-1 gene of the T cells, the researchers should be able to turn T cells back into a fighting force against cancer. Simular approaches are successfully being trialled in cancer therapy employing antibodies to turn off the PD-1 signal.

However the editing approach raises some concerns since T cells are long-term residents – sometimes remaining in the body for years. And if they are unleashed against cancer, one has to be sure they will not then go on to attack normal cells. “The danger is to create something you can’t control,” says Herold.

“We have to work ahead to figure out how to ensure safety” of T cells, Marson agrees. “But it’s an exciting time for cell-based therapies.