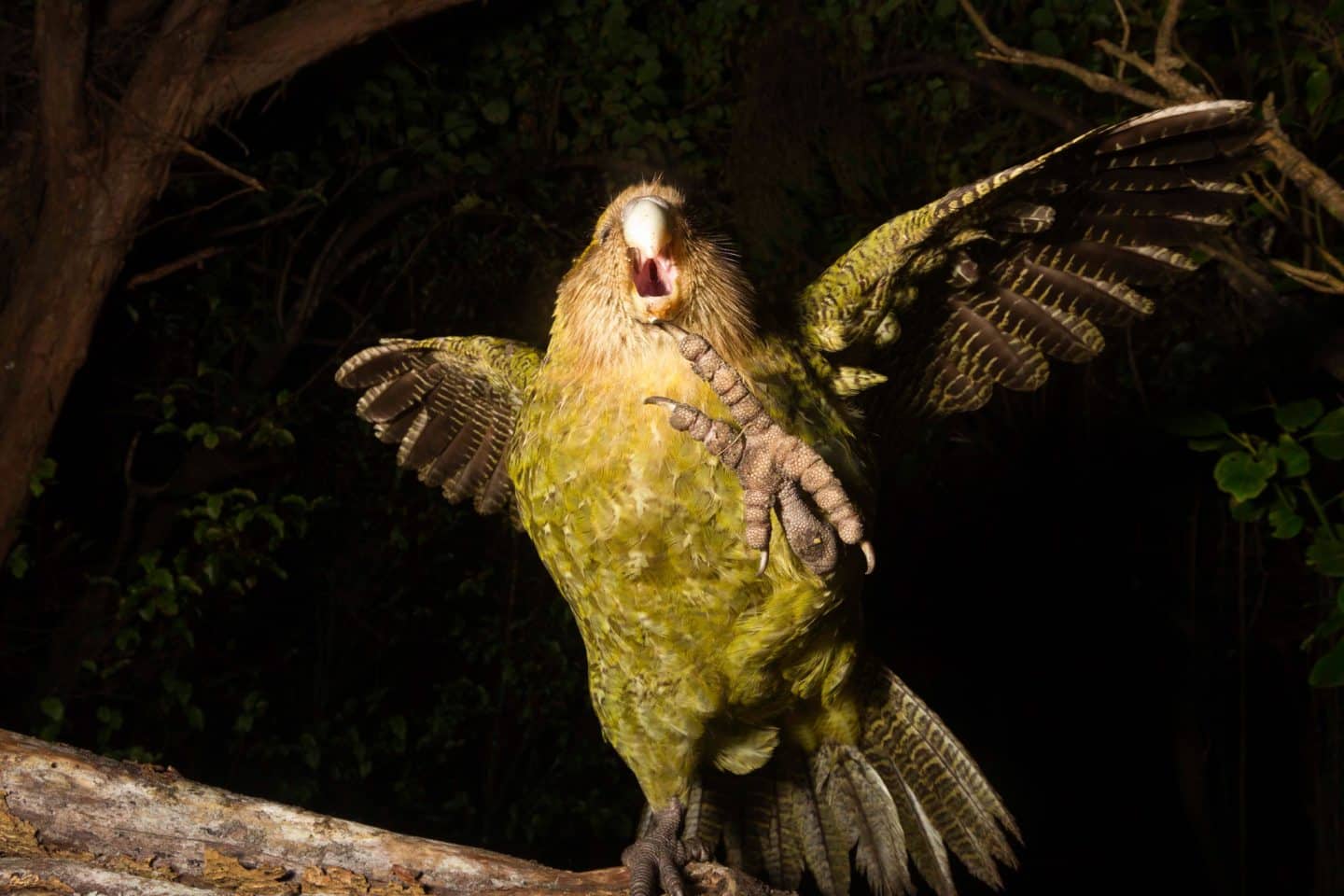 The kakapo (Strigops habroptila), a parrot native to New Zealand, may be the world’s strangest bird. Giant and flightless, with an owlish face, it lives up to its Maori name, which translates to “night parrot”. When kakapos emerge each night from their hidden daytime roosts, they plod across the fern-laced forest floor, or use their powerful feet to climb into the tree canopy in search of fruits, seeds, tubers, flowers, shoots, and leaves. In the southern summer (December through February), male kakapos gather at display areas, called leks, to compete for mates, and their booming calls can be heard reverberating through the forest for miles around. Those calls, which today are few and far between, might have gone completely silent had it not been for the efforts of a handful of scientists and volunteers desperately working to save the species.

Eaten almost to extinction by invasive predators, a mere 18 kakapos remained on Earth by the mid-1970s. But intensive human intervention over the past few decades—including the relocation of the remaining birds to predator-controlled offshore islands and the hand-rearing of chicks—has swelled kakapo numbers to more than 150 today. Biologists are more hopeful than ever that the species will recover. Yet that fate is far from assured.

Nurturing the population toward recovery requires costly round-the-clock attention during the nesting season. And now the birds have become numerous enough on the three islands where they’ve been relocated that they’re beginning to run out of space. New Zealand conservation biologists are pinning their hopes on an ambitious initiative to create new isolated safe havens for kakapos and other endangered native species—and eventually, to eradicate invasive predators across the mainland.

Efforts to save the kakapo began more than a century ago when Richard Henry, a self-taught

biologist, became alarmed at the mass slaughter of the birds by invasive stoats (weasel-like predators in the family Mustellidae). While kakapos were well-adapted to aerial predators like eagles and harriers with which they had evolved, they were no match for many of the mammalian predators that humans had introduced. In the late 1890s, Henry began moving as many kakapos as he could find to surrounding islands. But stoats can swim short distances, which meant they soon invaded what Henry had hoped could serve as safe havens for the birds. After fighting to protect kakapos for more than 10 years, Henry finally called off the operation. He simply couldn’t catch enough of the predators to stop the carnage.

For decades thereafter, searches didn’t turn up any birds, and some conservationists assumed kakapos had gone extinct. More than half a century passed before scientists discovered a small group of survivors in Fiordland. Unfortunately, all 18 in this population were male, so the species still appeared doomed. Then, in 1977, another group of holdouts was discovered on Stewart Island, and this population included females. Loathe to leave the species’ survival to chance, biologists embarked on an intensive recovery operation. They moved all remaining members to predator-free islands around the country. Today the birds are spread across Codfish, Anchor, and Little Barrier Islands. “We haven’t put all the eggs in one basket, as it were,” says Mick Clout, chair of the New Zealand Department of Conservation’s Kakapo Recovery Group and professor emeritus at the University of Auckland.

Still, even without predators to contend with, the biologists had their work cut out for them. Kakapos typically only breed every two or three years, when temperature differences trigger trees such as rimu (Dacrydium cupressinum) to produce massive crops of some of the birds’ favorite fruits and seeds (an event called masting). And then, even when the birds breed, about 40 percent of the eggs they produce are infertile and 15 percent die as embryos, meaning more than half of the eggs don’t even hatch.

To raise the odds of survival for kakapo offspring, biologists and volunteers from around the world now monitor nests throughout the breeding season, and are prepared to hand-raise young birds that aren’t receiving adequate parental care. Camped out in tents and sleeping bags, the nest monitors wait for the mother bird to leave. When she does, she trips an infrared beam, not unlike those used in home security systems, which triggers a bell to ring in the tent. While the female is out foraging, the monitors examine and weigh the eggs or chicks in the nest. If healthy and well-tended, they are returned to the nest; if not, they’re taken to the nursery for hand-rearing.

Prior to fledging, each young bird is outfitted with a small transmitter that reports when the bird is sick or dead, when it has mated (and with whom), and when the bird is nesting. Each bird will be carefully monitored and cared for from the day it hatches to the day it dies. Birds receive supplemental food during the breeding season to increase their chances of success, and some are treated for lethal infections that have appeared in the population in recent years.

“We don’t want to manage kakapo as intensively as we do,” says Andrew Digby, the science advisor for the New Zealand Department of Conservation’s kakapo recovery program. “We’d love to just let them do their own thing. But for the moment they wouldn’t breed successfully if we didn’t monitor them.”

And even this micro-managing has its limits. “We’re going to have to use genetic manipulation to save the kakapo,” said New Zealand’s then-Conservation Minister Maggie Barry in July. “There’s no way we can save them [without it] when there are so few.” At present, researchers are managing the small population’s genetic pool via artificial insemination and gene transfers. But Digby says fighting future diseases may eventually require gene editing to reintroduce certain gene variants that have been lost from the population.

Today, the kakapo population has reached a relatively stable, if not ideal, 153 individuals spread across the three predator-free islands. And the charismatic comeback birds have captured the public imagination in New Zealand and beyond—despite the fact that only a handful of people in the world have seen a wild one in the feathered flesh. Soon after a kakapo named Sirocco was caught on camera attempting to mate with a BBC photographer, the bird had its own Twitter account and 15,000 followers—an unexpected but welcome bit of publicity for the species and efforts to save it.

To achieve full recovery, though, the birds will require more territory. The team shepherding this effort—including a handful of Department of Conservation Kakapo Recovery Group members, independent scientists, and a member of the Ngai Tahu, the program’s main indigenous partner—are now scouting new sites that might be suitable for reintroduction.

“The aim is to have them back in a natural situation and restore the mauri, or life force,” Clout says, using a Maori term.

New Zealand’s bold plan to rid the entire country of predators by 2050 offers the best hope yet for snatching the kakapo from the jaws of extinction for good, biologists say. “The kakapo is a classic example of a species that nearly became extinct because of these newly introduced predators,” Clout says. “And it’s a good example of a native species being put back in these areas purged of predators.”

“Our ultimate goal is to return kakapo to the mainland,” Digby adds. “We want people to hear their amazing booming in the summertime that people used to hear 150 years ago.”

This story originally appeared on bioGraphic, an online magazine about nature and sustainability powered by the California Academy of Sciences.