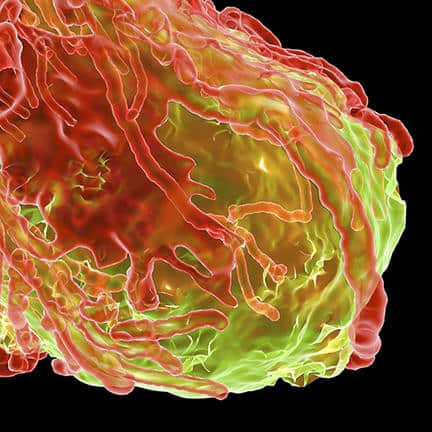 Cancer patients often fade away, their own body consumed by the voracious demands of their growing tumour. At least that’s what we’d always thought. But a new finding suggests that’s not necessarily the case. Researchers at Melbourne’s La Trobe University found that while cancers aren’t always treatable, the accompanying tissue wasting may be.

Their work, published in Cell in September, could leave patients stronger to continue their fight and prolong their lives.

Amelia Johnston, Nick Hoogenraad and their team stumbled upon a treatment that halts wasting of muscle and fat tissue – known as cachexia – in mice with tumours. “I always believed cachexia was the tumour feeding off the individual,” says Hoogenraad. “But it’s not that at all.”

Cachexia affects up to 80% of cancer patients. It is estimated to cause one in four cancer deaths, primarily when their diaphragm muscle becomes so wasted and weak they can no longer breathe. Doctors try to fight cachexia by feeding the patient up, but this approach rarely works.

Johnston and Hoogenraad did not set out to treat cachexia. They were investigating an idea first proposed by Harvard pathologist Harold Dvorak in 1986: that “tumours are wounds that do not heal.” Dvorak noticed how a tumour would hijack the body’s wound-healing response and create its own blood supply, allowing it to grow and spread aggressively.

When Hoogenraad’s team implanted mice with cancer cells genetically engineered to lack the Fn14 protein, the tumours grew almost as aggressively as a regular tumour. Yet the mice remained bafflingly fit, strong and healthy.

“We scratched our head and thought, ‘What the hell have we done?’” Hoogenraad says. Then they realised they had switched off the cachexia.

The team moved quickly, making antibodies that block Fn14. A mouse with a normal, Fn14-producing tumour will start to lose weight and sicken within eight days. But when mice with Fn14-expressing tumours were injected with the antibody, the weight loss never materialised.

“These things were jumping out of their cages, they were so healthy!” says Hoogenraad. The treated mice were still in robust health at the end of the 27-day experiment, despite their growing tumour. But the mice without the antibodies became so sick and emaciated they had to be euthanised after three weeks.

Patsie Polly, a cancer cachexia researcher at the University of New South Wales, says the treatment shows promise. “They not only reversed the loss of tissue mass, but enhanced survival rates – this was really cool to see,” she says.

The team doesn’t yet know what signals Fn14 sends out to trigger tissue wasting. They speculate one of these signals could be myostatin – a growth factor that tells muscle cells to stop dividing.

But if Fn14-targeting antibodies also work in humans, cancer patients could receive treatment for longer and have better chances of fighting their cancer. At the least, they might stay fit and strong for a greater time.

Johnston and Hoogenraad have teamed up with scientists at the Olivia Newton-John Cancer Centre in Melbourne to make human equivalents of the mouse antibodies ready for human trials. Hoogenraad envisions that one day cancer patients may receive a  fortnightly shot of antibodies to keep cachexia at bay. He estimates it will be six to eight years before the treatment is available to doctors.

And Hoogenraad thinks the possibilities might not end with cancer. Cachexia is also associated with HIV and tuberculosis. He wonders whether his antibodies to Fn14 could be used to also treat these conditions too. “It could be bigger than we know,” he says.