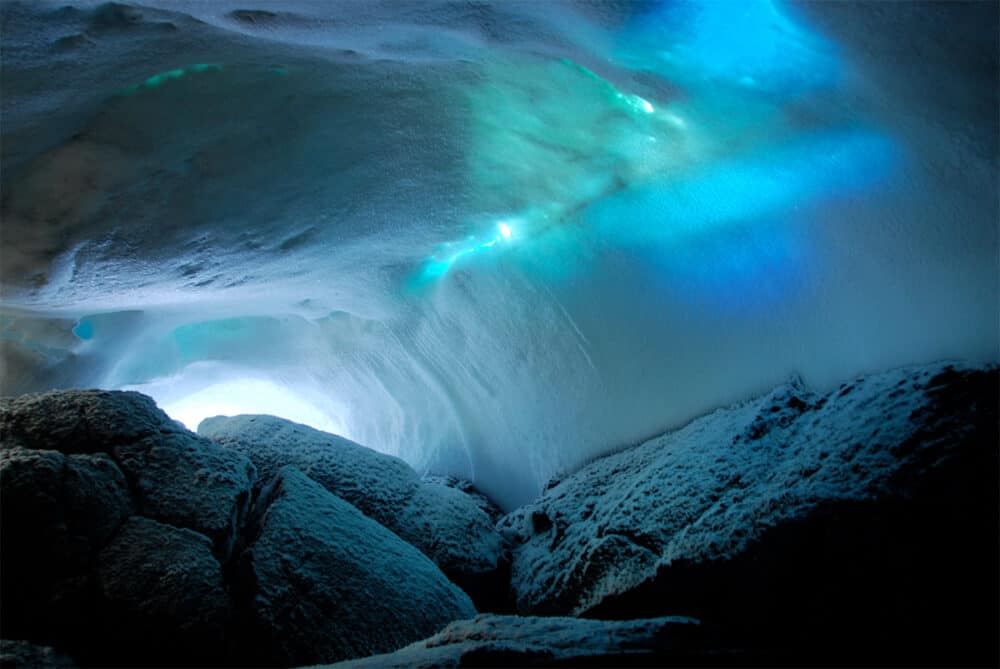 Is there an undiscovered colony of plants, algae and small animals living in caves beneath glaciers in the Antarctic?

That’s the intriguing possibility arising from research led by Ceridwen Fraser from the Australian National University, published in the journal Polar Biology.

Fraser and her team investigated a series of caves formed underground around Mt Erebus, an active volcano on Ross Island in Antarctica. The caves have been hollowed out by steam.

The researchers took soil samples from inside the extensive cave system beneath glaciers on the volcano and subjected them to a metabarcoding analysis. The results produced numerous traces of DNA. Some of it remains unidentified, but other samples were matched with a range of complex life, including mosses, algae, arthropods, and nematode worms.

“It can be really warm inside the caves – up to 25 degrees Celsius in some caves,” says Fraser.

“You could wear a T-shirt in there and be pretty comfortable. There’s light near the cave mouths, and light filters deeper into some caves where the overlying ice is thin.

“The results from this study give us a tantalising glimpse of what might live beneath the ice in Antarctica – there might even be new species of animals and plants.”

Ice-free land around Antarctic volcanoes is typically sparse, small in area and irregular. Subterrannean cave systems, however, can be large and interconnected.

Such cave systems are known to be present beneath the ice at other sites on the continent, including Mount Berlin and Mount Melbourne. They have also been found in the frozen northern latitudes, including in Alaska and Iceland. It is possible that some of these, too, harbour abundant life.

In their paper, Fraser and colleagues note that the number of different plants and animals identified through the DNA sampling almost certainly represent only part of the total biological community that might be in the caves. They note, in particular, the absence of tardigrades – which are found in almost every terrestrial environment – from the data.

“Their non-detection does not demonstrate absence,” they note.

Co-author Laurie Connell from the University of Maine, in the US, says the DNA traces did not conclusively prove plants and animals were still living in the caves.

“The next steps will be to take a closer look at the caves and search for living organisms. If they exist, it opens the door to an exciting new world,” she notes.