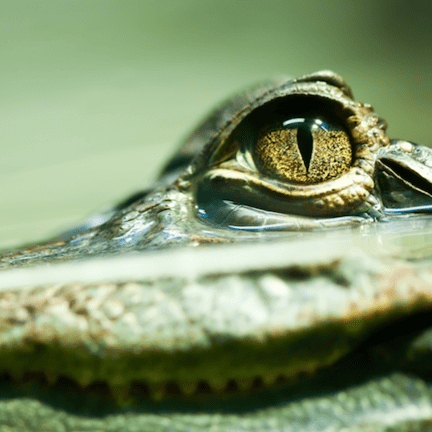 The incredible predatory attacks that have seen crocodiles thrive through millions of years is thanks, in part, to clever adaptations in their eyes, a new study has found.

Crocodiles are well-known in the animal world for their ability to lurk at the water surface and swiftly ambush prey on riverbanks.

A group of researchers in Australia were keen to find a link between this ambush-style attack mode, which crocs have employed for around 80 million years, and the reptiles’ visual system.

Crocodile eyes have quite a large lens and a mobile slit pupil which lets them control the amount of light that enters the retina.

The team, led by biologist Nicolas Nagloo at the University of Western Australia, zoned in on the crocodile retina, comparing the anatomy of saltwater (Crocodylus porosus) and freshwater (Crocodylus johnstoni) croc species from Australia.

In both species, the researchers uncovered a unique aspect of a crocodile’s fovea – that is, a depression in the retina that provides high-resolution viewing to its host, thanks to a high concentration of light-sensing cells called photoreceptors.

Rather than a compact fovea, like other animals, crocodiles sport a long stretch which extends back into the eye in line with the horizon.

When crocs lurk at the water line, Nagloo explains that “the water surface makes up the majority of the bottom of the visual field and the visual horizon occurs along the riverbanks where the crocodile sees best”.

The long stretch of the fovea, then, “provides the crocodile with increased visual clarity and the ability to see fine detail without moving their head”.

The differences between the two species lie in their ability to adapt to the significant differences in the way colour is distributed in their respective underwater environments.

“In freshwater habitats, there is a lot of long-wavelength [red] light,” Nagloo explains. “In contrast, saltwater habitats have a broader range of wavelengths, providing a greater amount of short-wavelength [blue] light.”

When the researchers analysed the saltwater croc’s eyes, they found its colour photoreceptors were slightly shifted towards blue wavelengths, when compared with the freshwater species.

“The subtle differences between the visual systems of the two Australian species gives each an advantage in their environments.”

The research was published in the Journal of Experimental Biology.