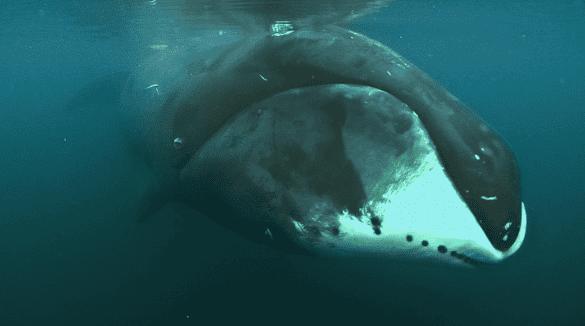 The bowhead whale is the longest living mammal on Earth – it can live for more than 200 years and shows little evidence of age-related disease – and scientists are now returning to its genome to see if there are any lessons there for increasing the length of human life.

“One of the big mysteries of biology is understanding species differences, including species differences in ageing,” said Joao Pedro de Magalhaes who recently sequenced the whale’s genome with his team at the University of Liverpool. “For example, mice age 20 to 30 times faster than human beings and we don’t know why … Even primates which are closely related to us age considerably faster than human beings,” he said.

“There has to be some genetic basis as to why bowhead whales live so long and appear protected from diseases.”

The genome sequence and important differences between the bowhead and other mammals identified by the researchers are reported in the Cell Press journal Cell Reports.

Bowhead whales reach up to 18 metres in length and weigh up to 100 tonnes when fully grown – making them the second heaviest whale after the blue whale.

Magalhaes said he believed the species evolved different “tricks” to achieve its longer lifespan “and by discovering the tricks used by the bowhead we may be able to apply those findings to humans in order to fight age-related diseases”. These whales have more 1,000 time more cells than humans but do not have a greater risk of cancer, suggesting they employ natural mechanisms that suppresses the disease.

It will be many years before any lessons learned from the bowhead whale can be applied to humans, said Magalhaes.

“The idea scenario would be to take a gene from the bowhead and put in a mouse and see if that mouse is protected from cancer … and lives longer,” he said. “We don’t have the money to do it yet, but that is something we would like to pursue.”

Originally published by Cosmos as Whale holds the secrets to longer human life?