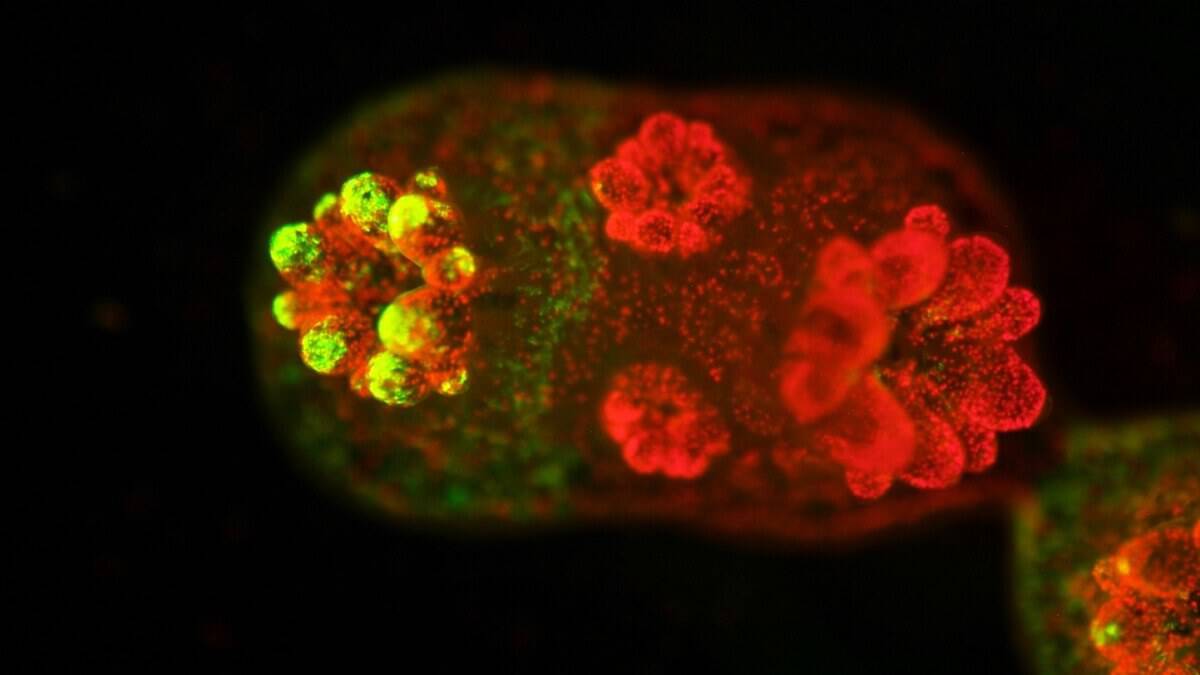 Corals receive some of their nutrients through a symbiotic relationship with photosynthetic algae living inside their cells, but increased ocean temperatures can stress the coral and cause a breakdown of this symbiosis. The coral expel the algae from their tissues in a process called coral bleaching, and will starve to death if symbiosis isn’t re-initiated.

A new study has found that although algal photosynthesis is a key part of this symbiotic relationship, it isn’t required to initiate symbiosis.

The research team made mutant algae (Symbiodiniaceae) that lacked the ability to photosynthesise and introduced them into a tank containing juvenile polyps of a stony coral, Acropora tenuis. They found that the algae infected the coral successfully in the dark and were able to proliferate in the coral tissues without photosynthesis.

The results – a step forward in finding ways to help coral survive climate change – are published in the journal Animals.

For the first time a team of researchers have developed artificial cilia – the short eyelash-like filaments found on the surface of most tissue cells and used for movement of ciliate protazoans.

These simple microstructures (smaller than a human hair) can perform complex motions, like bending, twisting and stroke-like motions, and could be used for a range of applications including soft robotics and biocompatible medical devices.

The artificial cilia move because they’re made of a photoresponsive liquid crystal elastomer; when light hits them, fundamental building blocks realign, and their structure changes shape.

As this shape change occurs, two things happen. First, the spot where the light hits becomes transparent, allowing the light to penetrate further into the material, causing additional deformations. Second, as the material deforms and the shape moves, a new spot on the pillar is exposed to light, causing that area to also change shape.

This feedback loop propels the microstructure into a stroke-like cycle of motion. The new research is reported in the journal Nature.

The vaquita porpoise (Phocoena sinus), the world’s smallest marine mammal, is on the brink of extinction with only 10 or fewer still living in Mexico’s Gulf of California, their sole habitat. But genetic analysis by a team of biologists from the University of California Los Angeles (UCLA) has found that the critically endangered species remains relatively healthy and can potentially survive.

They analysed the genomes of 20 vaquitas that lived between 1985 and 2017 and used computational simulations to predict the species’ extinction risk over the next 50 years. The new research is published in Science.

“Interestingly, we found the vaquita is not doomed by genetic factors, like harmful mutations, that tend to affect many other species whose gene pool has diminished to a similar point,” says co-lead author Christopher Kyriazis, a UCLA doctoral student in ecology and evolutionary biology. “Outlawed fishing remains their biggest threat.”

The small porpoises, which only grow to around 1.5 metres in length, often become entangled and die in the large mesh gillnets used by poachers hunting the totoaba fish.

Problems with double masking against COVID-19

The practice of double masking (with improperly fitted masks) may not significantly improve mask efficiency and instead produces a false sense of security, according to a new study published in Physics of Fluids.

Using a technique called principal component analysis (PCA) along with fluid dynamics simulation models, researchers have found that while more layers mean a less porous face covering, this leads to more air flow forced out of the gaps at the sides, top, and bottom in masks with a less secure fit.

Their model showed how the slight asymmetry typical in all facial structures can affect proper mask fitting. For example, a mask can have a tighter fit on the left side of the face than on the right side.

PCA-based simulations could be used to design better masks for different populations by revealing general differences between male and female, or child versus elderly, facial structures and the associated air flow through masks.

How worms’ guts send “hangry” signals to the brain

Hunger makes us think and act differently – hangry even – but little is known about how hunger signals in the gut communicate with the brain to change behaviour. Now, molecular neurobiologists have used tiny worms (Caenorhabditis elegans) as a model to explain the mechanism behind it.

The researchers created a barrier of copper sulphate, which is a known worm repellent, between the hungry worms and a food source. They observed that if worms were deprived of food for two to three hours, they were more willing to traverse the toxic barrier compared to well-fed worms.

Investigating which gut molecules might be sending signals to the brain, they found that specific transcription factors (TFs) – proteins that turn genes “on” and “off” – called MML-1 and HLH-30 shifted locations in the cells of hungry animals.

And when the scientists deleted the genes that code for these TFs, the hungry worms stopped trying to cross the toxic barrier. They then discovered that a protein called insulin-like peptide INS-31 is secreted from the gut when these TFs are on the move, and neurons in the brain make a receptor that might detect these secretions.

The new study is published in PLOS Genetics.