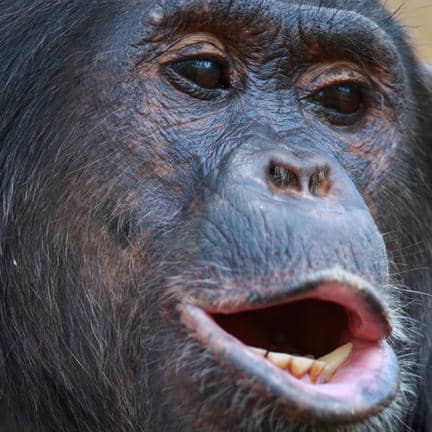 We might think regional accents are uniquely human – after all, language is our species’ forte – but they’re not. A study published in Current Biology this month by researchers at the University of York and the University of Zurich shows not only that chimpanzees have different dialects depending on where they live, but they can also adopt the local “language” when they relocate.

So far, the most sophisticated animal language decoded by scientists is not from an ape, or even a primate. Scientists have deciphered the high-pitched squeaky alarm calls produced by prairie dogs, rodents native to America’s southwest, and found them to be extraordinarily specific – the alarm call they make when a person approaches their burrow changes depending on whether the trespasser is tall or short, fat or thin, and even on the colour of their shirt.

But what about chimpanzees, with whom we shared a common ancestor only five to seven million years ago? We have the same basic vocal anatomy as our primate cousins – lips, tongue, voice box, throat and lungs – but our exceptional vocal control allows us to warble operas or whisper secrets while chimpanzees are confined to hoots, grunts and screams.

Yet even with their restricted vocal palette, chimpanzees have special grunts or hoots for particular types of food. When seeing or eating apples, they’ll puff out a series of exhaled grunts. Biologists had hypothesised that the pitch and tone of those grunts reflected their level of excitement at seeing the apple rather than being the controlled vocal sounds we associate with human language.

In 2010, Simon Townsend from the University of Zurich and colleagues saw a prime opportunity to put that assumption to the test. Nine chimpanzees from the Beekse Bergen Safari Park in the Netherlands were being moved in with nine resident chimpanzees of the Edinburgh Zoo in Scotland. Before the move, the researchers recorded each group’s grunt for “apple”. They noted that the Dutch grunt was pitched much higher than the Scottish grunt.

Returning three years later, the researchers were surprised to find the Dutch immigrant chimpanzees’ grunt for “apple” had lowered in pitch and now sounded the same as their Scottish buddies. The team tested the Dutch chimp’s preference for apples, which hadn’t changed, showing the change in pitch really did reflect the animal’s adoption of the local accent.

“I think it’s a great study,” says Klaus Zuberbuehler, a cognitive psychologist and primate researcher at Scotland’s University of St Andrews. A degree of “vocal convergence” has been reported before in other primate species, he points out. Female Diana monkeys, found in West Africa, change their calls to match females from different social groups while “chatting” to each other. Marmosets and macaques can also match the pitch of their calls with different social groups. But Townsend’s study is the first to look at a call that refers to a specific object, Zuberbuehler says.

In the chimps, vocal convergence only happened after the two groups established strong social bonds – something that only happens with chimpanzees in captivity, Zuberbuehler adds. “I have never heard of a case where two groups fuse in the wild,” he says. “So this study also shows something about the behavioural flexibility of great apes, that they are capable of social behaviour beyond what’s required in the wild.”

So why did the Dutch chimpanzees take on the Scottish accent, and not vice versa?

After the two groups merged, the dominant male to come out on top was a local Scottish chimpanzee, but the researchers suggest the immigrant group may have adopted the “words” of the local group in order to better fit in – a little like how a child starting a new school might pick up the local slang to stand out less.

Townsend is keen to nail down exactly why chimpanzees alter their language: “Is it so that they can be better understood? Or is it just to sound more similar to their friends?”

See also from Cosmos: Are we destined to be the apes of war?

Watch the video of prairie dogs and their complex calls.