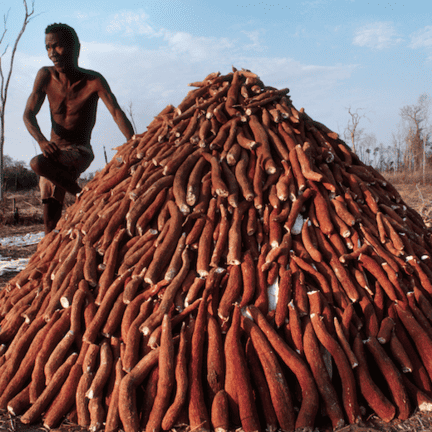 Bill Gates called it the “world’s most interesting vegetable“. It feeds a billion people every day, despite naturally producing poisonous cyanide. But the root vegetable cassava is in genetic strife.

A huge study profiling the genome of cassava varieties worldwide, including Asia, Oceania, Africa and its native South America where it’s a staple crop, found some areas lack genetic diversity, and are prone to be wiped out by a single disease or pest.

But the same work, led by University of California, Berkeley geneticist Jessen Bredeson and published in Nature Biotechnology, also gives agronomists the tools to breed more resistant and less toxic varieties of the crop.

Despite it being the fifth most important crop in the world – some 40% of sub-Saharan Africa relies on the crop as the main food source – there’s been little research into its genetics, says Ros Gleadow from Monash University in Melbourne, Australia, who was involved in the study. This is mainly because it’s considered “a poor man’s crop”.

“Also, it’s grown from cuttings,” she says. “It’s not like you can sell people seed every year. You could sell it once, then everyone will have it next year.”

Crops with low genetic diversity – that is, all plants having almost identical genetic makeup – can’t adapt to pressures such as pests. Some cassava varieties in Oceania were found to be low in genetic diversity, meaning if diseases in Asia spread to countries such as Vanuatu, Fiji and Samoa where the crop is a staple, it “could be a big issue”, Gleadow says.

And mapping loads of different cassava genomes allows agronomists to pick and choose different varieties to broaden a crop’s gene pool, and avoid the looming threat of mass crop death.

But there are more genetic secrets waiting to be unveiled. Cassava produces cyanide as a natural pesticide. These levels are reduced through cooking and processing, but in times of drought, cyanide production surges. And if populations reliant on the crop don’t cook or process the cassava enough, and don’t eat enough other food, can become paralysed or even die.

“We know the genes that control this production of cyanide and we can see how they vary across varieties and see why they grow more toxic when drought-stressed,” Gleadow says.

“Now we have some extra genetic tools to overcome it and make the crop safer.”