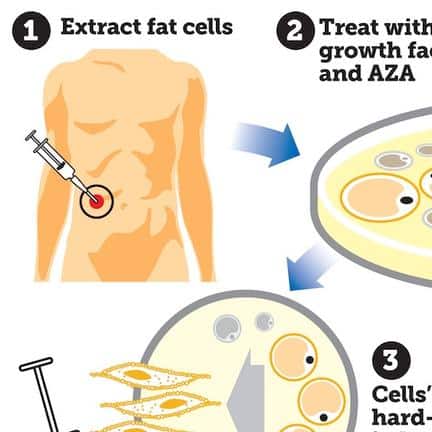 This claim is made by University of New South Wales scientists who developed a method for turning fat and bone cells into stem cells that have the ability turn into any other cell. The scientists say their method could be trialled in humans as early as next year.

Reprogramming cells to lose their memory and form a different cell type has been a valuable research tool. Nerve cells produced from the skin cells of Parkinson’s patients, for instance, has allowed scientists to track the disease’s symptoms in a petri dish.

But using these induced stem cells to treat tissue damage such as spinal injury in a patient has been out of reach. For one, the cells can form tumours. And other stem cells, isolated from embryos and reprogrammed for the same purpose, have limited use because they’re ethically controversial and cannot be programmed to form more than one cell type.

The Australian team says it has overcome these problems by transforming fat and bone cells extracted from mice into a new cell type they call “induced multipotent stem cells”, or “iMS cells”.

The method involves treating fat or bone cells with a compound which relaxes the hard-wiring of the cell, followed by growth factors which prompt the cells to multiply.

“We have taken bone and fat cells, switched off their memory and converted them into stem cells so they can repair different cell types once they are put back inside the body.”

The authors argue their iMS cells are similar to the cells salamanders form around damaged tissue, which allow them to grow new limbs.

When the team injected iMS cells into mice implanted with a bone graft, they saw new marrow-filled bone and cartilage formed around the transplant within 12 weeks. A similar bone implant of mice not injected with iMS cells did not show this level of regeneration.

The scientists also saw no tumour behaviour in iMS cells after 12 weeks.

Their sights are set on spinal implants, which have been found to heal poorly in 20% of recipients. Injecting iMS cells alongside the implant, the team hope, will improve the implant to fuse with the surrounding tissue.

“The therapy has enormous potential for treating back and neck pain, spinal disc injury, joint and muscle degeneration and could also speed up recovery following complex surgeries where bones and joints need to integrate with the body,” said University of New South Wales’ Ralph Mobbs, who will lead the human trial.

“This represents a potential huge leap forward for spinal and orthopaedic procedures,” he adds.

The method was published in Proceedings of the National Academy of Sciences.