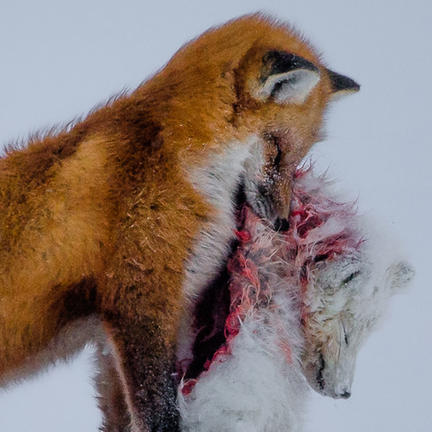 An astonishing image of a pregnant pony uterus has been selected as the overall winner for the 2015 Wellcome Image Awards.

The photograph was taken by Michael Frank, and is of an historic specimen from the Lanyon Anatomy Museum of the Royal Veterinary College in London. It shows the preserved uterus of a New Forest pony, approximately five months into the pregnancy, with the developing foetus still attached.

Picture editor of BBC Focus magazine, James Cutmore, who was a member of the judging panel, said: “As far as standout images go, the image of the horse’s uterus with the foetus still inside was incredible and just sticks in my mind. It evokes many different emotions at once. It’s fascinating, sad, macabre, almost brutal. Yet the subject is also delicate, detailed and beautiful. The image shows us a large and magnificent creature reduced to this sad, fragile and half-formed creation, which I find very humbling.”

French photographer Luc Jamet beat more than a thousand amateur and professional astrophotographers from around the globe to win the title of Insight Astronomy Photographer of the Year competition – an annual global search for the most beautiful and spectacular visions of the cosmos.

The judges were enthralled by Jamet’s image capturing the drama of the total solar eclipse of 20 March 2015, 100 metres above the wintry valley of Sassendalen in the Norwegian territory of Svalbard. Competition judge and Royal Observatory public astronomer Marek Kukula said: “The total solar eclipse was one of the astronomical highlights of the year and Luc Jamet has captured it perfectly. I love the way that the icy landscape of Svalbard reflects and intensifies the evocative colours of the sky – colours that only occur during the few minutes of totality, and which make any eclipse an unforgettable experience.”

A tale of two foxes By Don Gutoski

Winner – Wildlife photographer of the year 2015 at the Natural History Museum, London

Canadian amateur photographer Don Gutoski was named the Wildlife Photographer of the Year 2015 by a panel of international judges for his beautiful but haunting portrait of the struggle for life in the subarctic climes of Cape Churchill, Canada. It’s a frozen moment revealing a surprising behaviour, witnessed in Wapusk National Park, on Hudson Bay, Canada, in early winter. Red foxes don’t actively hunt Arctic foxes, but where the ranges of two predators overlap, there can be conflict. In this case, it led to a deadly attack. Though the light was poor, the snow-covered tundra provided the backdrop for the moment that the red fox paused with the smaller fox in its mouth in a grim pose.

Jury member and National Geographic magazine’s senior editor for natural history projects Kathy Moran says: “The immediate impact of this photograph is that it appears as if the red fox is slipping out of its winter coat. What might simply be a straightforward interaction between predator and prey struck the jury as a stark example of climate change, with red foxes encroaching on Arctic fox territory. This image works on multiple levels: it is graphic, it captures behaviour and it is one of the strongest single storytelling photographs I have seen.”

Australian Ralph Grimm was awarded first place in the annual Nikon Small World Photomicrography Competition for his incredible close-up image of a bee eye covered in dandelion pollen grains. Grimm’s winning image is not only visually striking, but brings to light just how little is understood about how these incredible insects see the world.

The story behind the image is also touching. As a high school teacher, self-taught photomicrographer and former beekeeper, the subject matter is near and dear to Grimm’s heart. While bee colonies continue to dwindle worldwide, Grimm hopes his image can serve as a voice for this rapidly disappearing insect that plays such a critical function in pollinating the world’s crops. “In a way I feel as though this gives us a glimpse of the world through the eye of a bee,” says Grimm. “It’s a subject of great sculptural beauty, but also a warning – that we should stay connected to our planet, listen to the little creatures like bees, and find a way to protect the earth that we all call home.”

This underwater photo of a group of tadpoles captured by biologist Bert Willaert won first place in the inaugural Royal Society Publishing photography competition. The photo contest is a new event for the Royal Society, London, which is one of the oldest scientific societies in the world. The competition was created to commemorate the 350th anniversary of the journal Philosophical Transactions of the Royal Society.

The winning photo stood out from more than 1,000 entries for giving a tadpole’s glimpse of the world beyond the water — a surprising perspective of an everyday biological phenomenon. The tiny tadpoles are examples of the power that a common biological phenomenon can possess when it’s “visualised in a new light,” said Alex Badyaev, an acclaimed wildlife photographer and one of the judges of the competition. The larval frogs are particularly striking because they represent “the other half of the ecosystem, the half we usually miss when looking down at a tadpole’s puddle, but one that is very much part of the tadpoles’ own view,” Badyaev said.

This photo taken by Queensland’s Tory Casswell reveals the celestial beauty of the Milky Way and won the top prize in the Central West Astronomical Society Astrophotography Awards during the annual AstroFest in Parkes, NSW.

“This is a stunning rendition of the brightest part of the Milky Way,” said David Malin, the world-renowned astrophotographer and judge of the competition. “[The image] reveals vast star clouds of Sagittarius, and the wispy dust and elusive nebulae and bright stars in Scorpius and Ophiuchus,” he said.

The annual competition for amateurs honours the best photos and timelapse videos of the night sky taken by cameras or telescopes in a range of technical categories.

Winner of the 2015 New Scientist Eureka Prize for Science Photography

Queensland Museum photographer Gary Cranitch has been awarded the New Scientist Eureka Prize for Science Photography for this image.

Soft corals are more diverse and widespread than hard corals, but much less is known about their overall contribution to coral reef biodiversity. About one-third of the world’s soft coral species are found on the Great Barrier Reef, with our limited knowledge of these species an indication of how much we still have to learn. Through his beautiful image, Gary Cranitch brings our attention to this true ‘indicator’ species.

“Gary’s striking image highlights the need to understand the Great Barrier Reef’s often-ignored soft corals” Kim McKay, executive director of the Australian Museum, said. “I congratulate Gary on being a finalist for the second year in a row and now the winner of this prestigious prize,” she said.

“Earth science is all around us and makes a significant difference to our everyday lives. This competition aims to raise awareness of our geological heritage and encourages people to consider the importance of geology in our world,” Geoscience Australia chief executive Chris Pigram said.