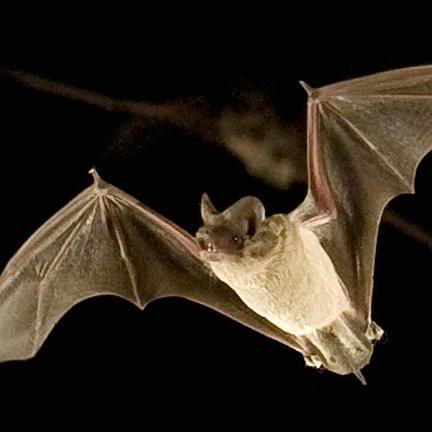 Mexican free-tailed bats use sonar to navigate, hunt and communicate. It turns out they also use it for sabotage, according to a report in Science by Aaron Corcoran and William Conner at Wake Forest University in North Carolina. “We always suspected that it existed but this is the first time it has really been proven,” says Marc Holderied, a specialist in bat behaviour and ecology at the University of Bristol.

Bats emit high-frequency chirps and squeaks and listen carefully to the echoes to give them an “acoustic image” of their surroundings. Because the echoes are weak they need to hear their own voices distinctively, so they vary their pitch to create a unique song signature. But it turns out these song contests can get nasty.

Imagine you and a friend, armed with torches, are out picking strawberries at night. You stop, thinking you’ve just spotted a big one, but instead of helping you look for it, your friend shines his torch straight in your eyes and goes for the berry himself. Not fair but very effective.

It turns out the Mexican free-tailed bat uses a similar strategy. Just before homing in on its prey, the bat broadcasts a “feeding buzz” – rapid-fire chirps that locate the target with such precision the bat can snatch a flying moth out of the darkness. The researchers found that at this critical moment a competing bat broadcasts a mimicking buzz. Its perfectly matched frequency jams the hunter’s signal. The hunter bat loses the moth and the jamming bat gets easy pickings. It’s an “aerobatic dog fight”, says Conner.

The jamming signal is the first example researchers have found of deliberate sonar interference in mammals. So with around 15 well-characterised call signals, why has this one not been picked up sooner? “Bat sounds have been measured in or near a colony, which is why we think this one got missed – foraging happens high in the night sky and no research so far has looked at it,” says Conner.

Researchers are also wondering if other animals that use biosonar, such as dolphins, use similar sabotaging tactics.

It turns out crafty bats aren’t the only ones to have cottoned on to jamming. Researchers have discovered that the tiger moth Bertholdia trigona has developed a sophisticated self-defence system to block the bat’s signal, with the ability to emit 4,500 clicks per second from a dedicated structure beneath its wing, called a tymbal. It’s an effective escape tactic – jamming moths are 10 times more likely to survive.

The dark night still holds many secrets, says Conner. “When we point our technology at the night sky we know we’re going to discover something new,” he says.