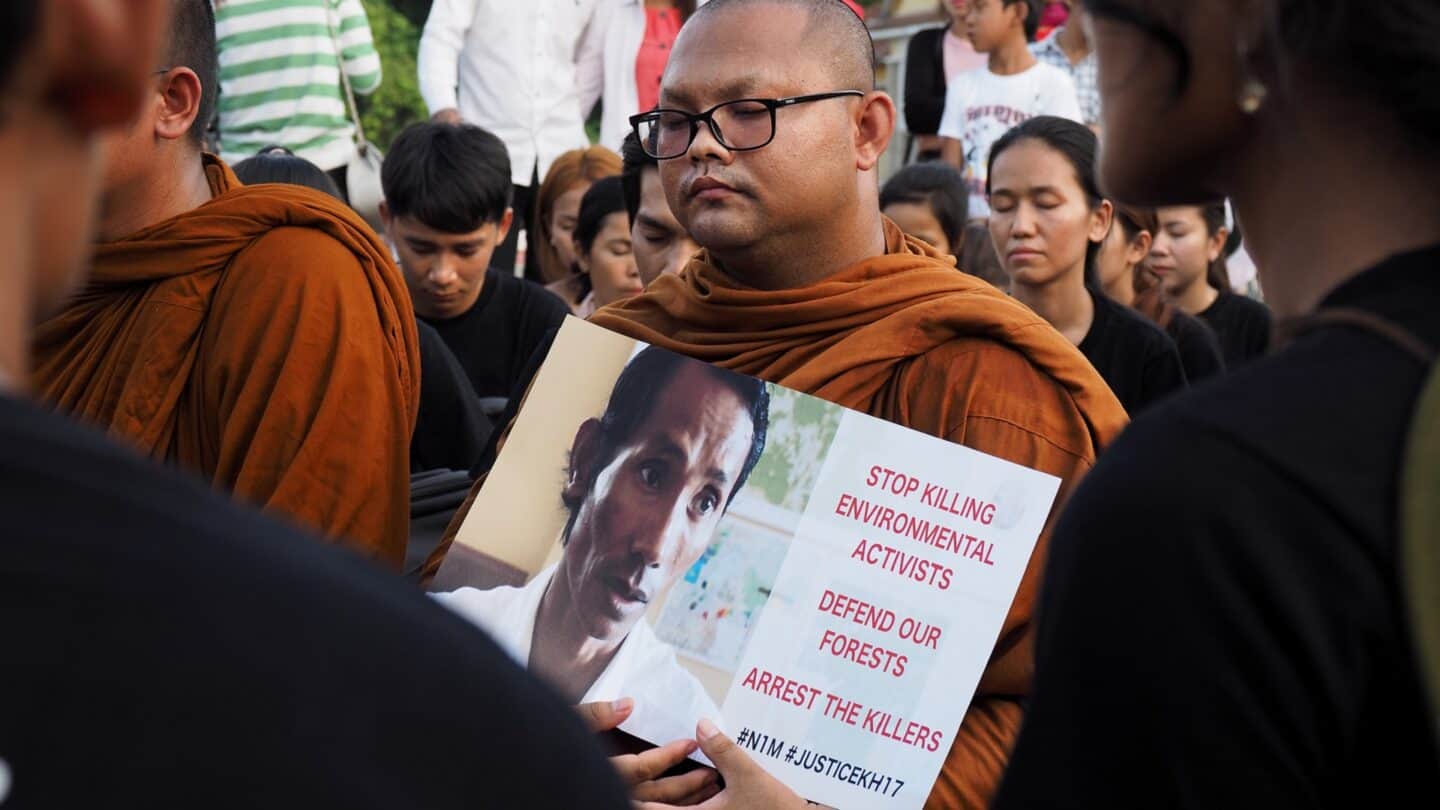 Over 1500 people have been killed defending the environment in the past 15 years. Credit: Satoshi Takahashi/LightRocket/Getty Images
More on:
news

The gunfire rang out. One bullet lodged into the wall next to Marivicc’s head, another pierced the corrugated iron roof.

The attackers were inside her village, peppering the buildings.

Until then it had been a normal afternoon for Marivic Danyan. A young, soft-spoken woman, she was preparing lunch at her home in the remote village of Datal Bonglangon, in Mindanao, a southern island in the Philippines. Out of nowhere the violence started.

Grabbing a homemade rifle and bow and arrows, Marivic’s father Victor – the village chief – didn’t take cover. Instead he rushed out to protect his friends, family and fellow villagers.

Victor, along with Marivic’s husband, two brothers and a number of other villagers were no match for the Philippine army’s 27th Infantry Battalion. They were outnumbered, outgunned, slaughtered.

Staggering back in, Victor held Marivic’s hand as he died.

For the next 20 hours all Marivic could do was hide with her two young daughters, hoping that they wouldn’t be killed too.

It wasn’t until the next morning when the village was quiet, that the survivors ventured out and saw the aftermath of the massacre first hand. Marivic’s family were riddled with bullets.

“That’s when I decided to be strong so I could tend to the bodies,” she recalls in an interview with The Guardian. “I had to put part of my husband’s brains back inside his skull so he was fit for burial. I tried to change the clothes of my dead brothers, but their wounds were too bad.”

The Philippine government claim that the village was simply caught in the crossfire between the military and rebel group, the New People’s Army (NPA).

Marivic rejects that story. She believes it was her father’s determination to defend territory from Silvicultural Industries, an agriculture corporation in the area, that led to the massacre.

Unfortunately, Marivic’s story isn’t a once off. It was just one in a long history of disputes between corporations and locals over the environment.

A new paper in Nature Sustainability has revealed that between 2002 and 2017, more than 1,500 people across 50 countries who were engaged in some form of environmental activism were killed.

The rate of deaths has doubled over those 15 years – from two a week to four. According to the study, that’s more than double the number of British and Australian military personnel killed during active duty globally during that same 15-year period.

Just 10 per cent of these murders resulted in conviction. The global average for other homicides is over four-times greater.

“The number of reported deaths of environmental defenders has increased, as well as the number of countries where they occur,” says Nathalie Butt, who led the research at the University of Queensland.

Activist Sikhosiphi “Bazooka” Rhadebe is just one of these fatalities.

Bazooka, nicknamed after his favourite soccer star, was the chairman of the Amadiba Crisis Committee. The committee were publicising concerns about the environmental impact of a titanium mine an Australian mining company was developing on South Africa’s Wild Coast. At the front of these protests were Bazooka. He started receiving anonymous death threats. Then, he was assassinated in his home.

Three years later no suspects have been identified.

The numbers of assaults, threats and murders are thought to be huge underestimates. The researchers rely on in-country sources such as human rights organisations and journalists to record attacks. In some countries, press freedom is an issue which means that violent incidents and environmental defender deaths often go unreported.

The drivers of violence against environmental defenders

It’s when these conflicts can’t be solved through social, administrative or legal channels, that violence can emerge.

Butt argues that it’s that conflict with business interests which is the main driver for the violence. The most dangerous, in some cases deadly, industries that environmental defenders went up against were agribusiness and mining. In 2017 alone 37 deaths were linked to agribusiness. Mining accounted for 36.

Poaching, hydroelectric dams and logging were also key industries accounting for a combined 45 deaths in 2017.

Perhaps unsurprisingly, countries which had the highest levels of corruption and less legal oversight tended to have more environmental-protector deaths. And in some cases, it was police or government officials carrying out the violence.

“In many instances, weak rule of law means that cases in many countries are not properly investigated, and sometimes it’s the police or the authorities themselves that are responsible for the violence,” says Butt.

“For example, in Pau D’Arco, Brazil, ten land defenders were killed by the police in May 2017.

Consumers, investors and businesses need to be more accountable

“As consumers in wealthy countries – who are effectively outsourcing our resource consumption – we share responsibility for what’s happening,” argues Butt.

“Businesses, investors and national governments at both ends of the chain of violence need to be more accountable.”

Isela Gonzales is fighting for indigenous land rights in Mexico. She’s been threatened more times than she can remember by educated men in suits whose business interests in logging, mining and agriculture are disrupted by her mission to protect land rights.

Isela has heard threats against her life on the courthouse steps outside legal hearings. She’s heard them over the phone or conversations that she’s been allowed to overhear.

Now, she has armed guards by her side 24 hours a day. She has panic buttons in her office and upgraded security in her home.

Activists keeping up the fight

For Maria do Socora Silva, intimidation tactics went beyond threats. Her house has been broken into, she’s been assaulted and has felt the cold metal of pistol barrel against her ear.

She’s trying to defend her Amazonian home against the world’s biggest alumina refinery and the local government who backs the project. She’s almost accepted her fate.

“Will we fight this? Yes. Will more die? Yes!” she says. “They kill the water, the air and the animals. They should be put in prison.”

As for Marivic Danyan, her fight continues without her father by her side.

“Blood has been spilled and we are ready to give our lives. I won’t use violence. I will use the law, but I will continue to fight.”

Originally published by Cosmos as Who will defend the defenders?