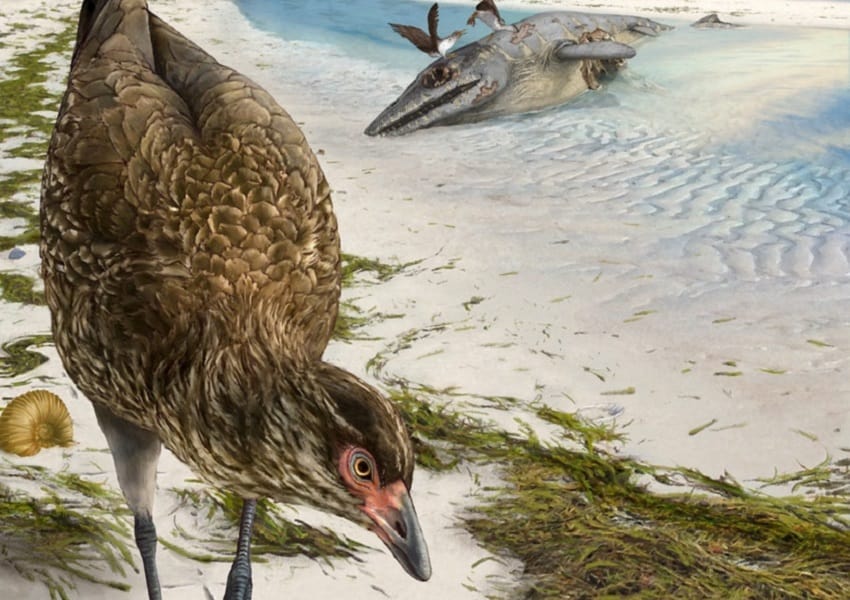 Palaeontologists have found the oldest fossil of a modern bird, originating from before the last mass extinction that wiped out the dinosaurs at the end of the Cretaceous period.

The ‘Wonderchicken’ discovery, published in the journal Nature, suggests that early relatives of modern-day chickens and ducks lived at the same time as the last of the giant dinosaurs such as Tyrannosaurus Rex and Triceratops.

Officially named Asteriornis, the fossil also gives insights into how modern birds managed to survive the mass extinction while dinosaurs could not, says research lead Daniel Field from the University of Cambridge, UK.

“[W]e believe that traits such as relatively small size, an ability to fly, a tendency to predominate on the ground instead of in trees, and a generalist diet were features that favoured the survival of some bird lineages across this devastating extinction event,” he says.

“These surviving lineages of modern birds went on to diversify into the thousands of living bird species that we share our planet with today.”

The team made the discovery in a limestone quarry near the Belgian-Dutch border.

“We began investigating a fossil specimen that did not seem very inspiring at first,” says Field. “It was made up of four small broken rocks, with a few broken leg bones sticking out.”

But they were on the hunt for clues to the origins of modern birds, a topic shrouded in ambiguity due to sparse fossil records, and knew the rocks containing the fossil originated 66.7 million years ago, 700,000 years before the asteroid impact that ended the dinosaur era.

To get a closer look at the bones hidden beneath the rock’s surface they used high-resolution X-ray CT scanning – a technique that has revolutionised the field of vertebrate palaeontology and made discoveries like this possible.

“When we were able to look beneath the surface of the rock we were absolutely amazed to discover a nearly-complete bird skull staring out at us,” says Field.

They instantly identified it as a modern bird, but it was after more than a year of meticulous anatomical comparisons that they worked out what kind it was.

It turned out that the skull combined distinctive features seen in living relatives of chickens and ducks – the first time this combination has been seen, confirming what evolutionary biologists have long hypothesised.

Field believes their fossil, therefore, could be the last common ancestor shared by these two familiar ground-dwelling birds from the group called Galloanserae.

It’s also the first modern bird from the age of dinosaurs to be found in the Northern Hemisphere, toppling previous indications that modern birds originated in the Southern Hemisphere as most fossils had been unearthed in Antarctica.

The team named it after Asteria, the Greek Titan goddess of falling stars.

“In Greek mythology, Asteria transforms herself into a quail,” explains co-author Daniel Ksepka from the Bruce Museum in Greenwich, “and we believe Asteriornis was close to the common ancestor that today includes quails, as well as chickens and ducks.”

The find opens new doors which would not be possible without the new analytical scanning techniques.

“Asteriornis now gives us a search image for future fossil discoveries – hopefully it ushers in a new era of fossil finds that help clarify how, when and where modern birds first evolved,” says Field

For now, though, Wonderchicken is a once-in-a-lifetime discovery.

“The moment that we first saw the beautiful fossil bird skull preserved within the rock was the most exciting moment of my scientific career, and it’s one I will never forget.”

Originally published by Cosmos as ‘Wonderchicken’ fossil from dinosaur age