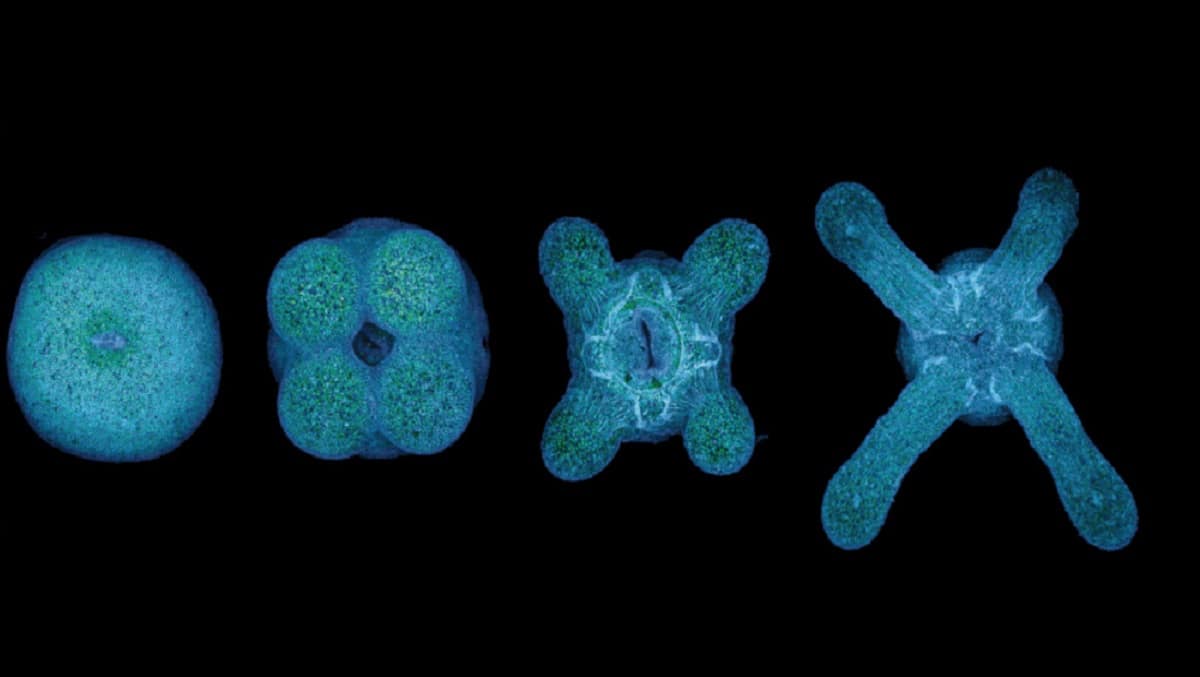 The development process of the characteristic tentacle arms of a sea anemone. Credit: Anniek Stokkermans/EMBL
More on:
sea anemones

The number of tentacles, or arms, that a sea anemone has depends on how much food it has eaten, researchers have discovered.

It may be their genetic code that determines how many legs humans have, fins fish have, and wings insects have, but for predatory marine animals of the order Actiniaria, it’s all about consumption.

And it continues throughout their lives.

“Controlling the number of tentacle arms by food intake makes the sea anemone behave more like a plant developing new branches than an animal growing a new limb,” says Aissam Ikmi from Germany’s EMBL Heidelberg, whose team worked with researchers from the Stowers Institute for Medical Research in the US.

And that’s more than just a fun fact. The number of tentacles must be determined by the interplay between genetic and environmental factors, the researchers say, and defining what triggers morphological changes is an important question given the longevity of sea anemones. Some species living for more than 65 years.

“As predominantly sessile animals, sea anemones must have evolved strategies to deal with environmental changes to sustain such a long lifespan,” Ikmi says.

The researchers analysed more than 1000 sea anemones one by one, spending months imaging their heads to score their tentacle number and location.

They found that muscle cells pre-mark the sites of new tentacles, and these cells change their gene expression signature in response to food.

The same molecular signalling employed to build tentacles also exists in many other species, including humans, they say, but to date its role has been studied mainly in embryonic development.

“We propose a new biological context in which to understand how nutrient uptake impacts the function of this developmental signalling: a situation that is relevant for defining the role of metabolism in guiding the formation of organs during adulthood,” says Ikmi.

“Sea anemones show us that it is possible that nutrients are not converted into excess fat storage – as it is the case in all mammals – but instead transformed into a new body structure.”

The researchers say they now want to define the key nutrients critical to the process of tentacle growth and investigate the unconventional role of muscles in defining the sites where new tentacles form.

The image above right shows a larva of the starlet sea anemone (Nematostella vectensis) in the process of developing the buds that will give rise to its tentacles. These first four tentacles develop at defined positions when a larva becomes a primary polyp.

When the primary polyp receives food, it can acquire additional tentacles, becoming first a juvenile and then an adult polyp. Adult polyps can have up to 16 tentacles and can lose them in response to stress and regrow the tentacles after amputation.

The blue in the image shows staining of a polymer microfilament to make cytoskeleton and muscle fibres in the buds become visible. Green shows the nuclei in the larval cells.

Originally published by Cosmos as When sea anemones behave like plants