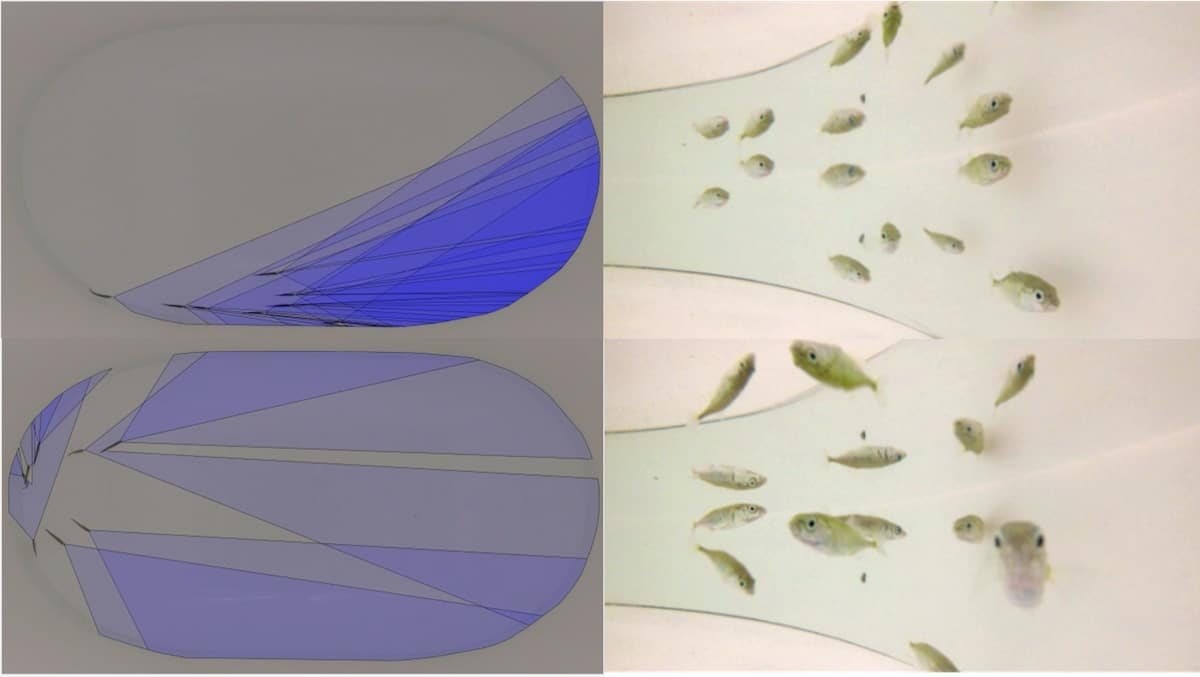 Left: the visual fields of three-spined sticklebacks in an ordered (above) and disordered group (below). Right: groups of the fish in the experimental arena. Credit: James Herbert-Read and Hannah MacGregor.
More on:
animal behaviour

An element of unruly adventure helps some fish in the quest for a feed, new research suggests, which may explain why shoals frequently switch between order and seeming chaos.

Biologists from the University of Bristol, UK, found that some individuals perform better when the group is disordered because they are more observant and faster to find sources of food, while others excel by following the crowd and exploiting their more proactive peers.

The study monitored 12 groups of eight three-spined sticklebacks (Gasterosteus aculeatus) over a month, measuring how quickly individual fish in each shoal located a food source that suddenly appeared in their environment.

By repeatedly testing the responses of the same groups, it was possible to measure whether individuals performed better or worse depending on how organised the group was when the food appeared.

“The disorderly ‘first responders’ to the food were quickest and in the minority,” says Hannah MacGregor, lead author of a paper in the journal Nature Communications.

“It was fascinating to see not only how individual styles varied, but also that the fish generally swam in their shoals in the way that was most advantageous for themselves.

“Those that thrived in disorder tended to swim less aligned to their neighbours, suggesting they may try to disrupt the shoal in case more food appears.”

A recognised benefit of foraging in an orderly group, MacGregor says, is the sharing of information about the location of food. But if you’re happy working alone, it’s better not to be constrained by needing to face the same direction as everyone else, which restricts your field of view.

More broadly, the findings indicate the need for a closer investigation of the complex dynamics within collective animal behaviour and the importance of individual diversity, the researchers say.

Originally published by Cosmos as When naughty fish get the food