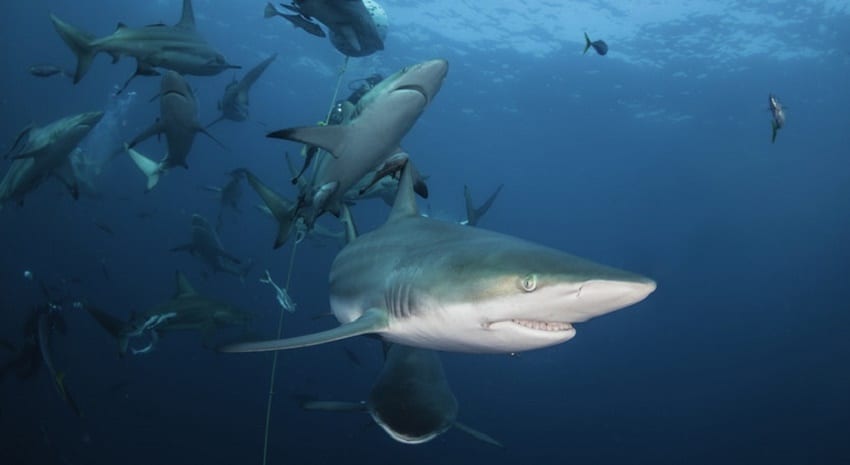 Maybe swim near the equator. Sharks are among the species found to be more active in temperate regions. Credit: WILDESTANIMAL / Getty Images
More on:
sharks

The puzzle of what factors create rich biodiversity towards the equator has captivated ecologists as far back as Darwin and Wallace, with theories that species interactions are responsible – a key one being predator activity.

A new study, published in the journal Nature Communications, challenges this controversial notion by showing that large ocean predators, such as sharks, tuna, sailfish and marlin, are more active in temperate regions.

It’s well known that apex predators, such as sharks, have vital roles in maintaining diverse ecosystems.

“Predation is a ubiquitous and ecologically important species interaction that is known to promote diversification in various organisms,” writes an international team led by Marius Roesti from the University of British Columbia in Canada.

They therefore used it to test the “biotic interactions hypothesis” that suggests species interactions are the driving force for latitudinal gradients of biodiversity.

Evidence for this theory from studies of terrestrial ecosystems has been mixed, and little is known about the spatial patterns of species interaction in the oceans.

To investigate this on a global scale, Roesti and colleagues analysed 55 years of data on more than 900 million attacks on fishing baits in the major pelagic (open) oceans between 1960 and 2014.

Although there was significant latitudinal variation in predation, they found predator attacks were consistently more common in temperate regions – the mid-latitudes around 30 to 60 degrees north and south – than around the equator, where the main predators are marine mammals, seabirds and deep-water fish.

Driving a further wedge into the hypothesis, the magnitude of predation was not associated with biodiversity of open water fish species, which did indeed occur closer to the equator.

Probing whether industrial fishing could have influenced these patterns, they did find that predation has dropped two- to three-fold over time, likely because the prey had been removed – but this didn’t change the latitudinal predation patterns.

Further exploration of individual predator species and other spatial factors didn’t change the outcome either.

The authors suggest their results could help explain the recent observation that rates of speciation – the formation of new and distinct species – in fish increase from the equator towards the poles.

This might lend weight to the theory that greater species interactions generate faster diversification, which they conclude creates a new conundrum for scientists.

“Evolutionary ecologists are now charged with explaining why the eco-evolutionary processes thought to generate and maintain diversity are not always strongest in the most diverse regions on Earth.”

Originally published by Cosmos as What causes equatorial marine biodiversity?