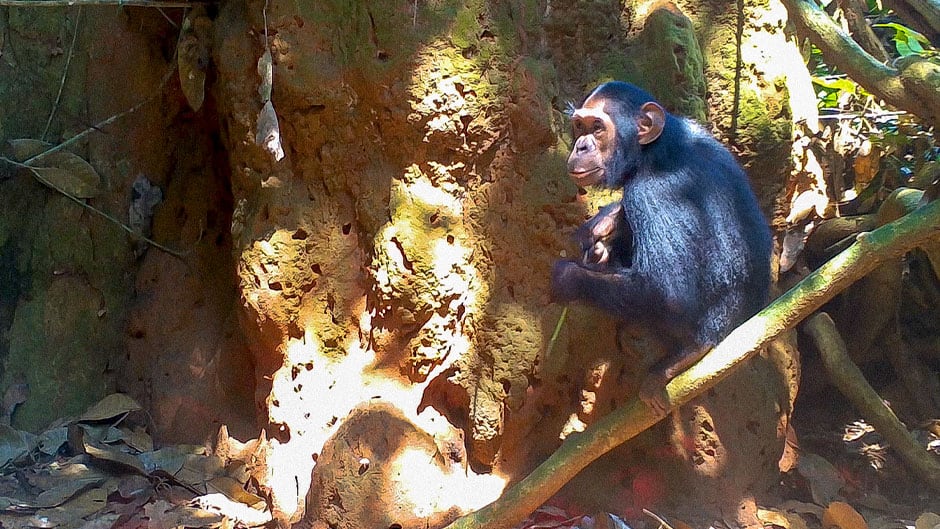 Research using remote video technology has shed new light on the remarkable toolmaking skills of wild chimpanzees, revealing distinct differences in the way skills have evolved and are learned in different parts of Africa.

Writing in the American Journal of Physical Anthropology, a team led by Stephanie Musgrave from the University of Miami describes a comparative study of chimpanzees in the Goualougo Triangle in the Republic of Congo and others in Tanzania’s famous Gombe Stream.

It was already known, Musgrave says, that those in Goualougo have arguably the most sophisticated arsenal of tool-using skills documented in the animal kingdom. Unlike their cousins to the east and west, who use a single tool to extract termites, they have separate sticks for puncturing and probing, and customise them to improve their efficiency.

Musgrave now has a good idea of how these skills develop from birth until maturity after watching more than 660 hours of periodic visits over 15 years to termite nests by – among other animals – 25 young chimpanzees belonging to a notoriously elusive subspecies: Pan troglodytes troglodytes.

This was the catalyst for a collaborative project with David Morgan and Crickette Sanz, who founded the Goualougo Triangle Chimpanzee Project, and Elizabeth Lonsdorf, who studies chimpanzees at Gombe.

Adapting methods developed at Gombe, they found notable differences in the timing and sequence in which the animals in the two populations acquired termite-gathering skills.

While infants in both areas begin trying to use tools within their first two years, the Gombe youngsters learn to make their tools before or at the same time as they become proficient at using them.

In contrast, the Goualougo youngsters learn to termite fish before acquiring their tool-making skills. In early life, they typically use tools that have been discarded or transferred to them by other, older chimpanzees.

Unlike the Gombe chimpanzees, who use varied materials, the Goualougo chimpanzees also carefully select the materials for their tools, almost always from just a few species of plants. And they modify them to improve their efficiency.

“They have a mental template of the right tool for the job, and there’s no mistaking the different tool types,” Musgrave says. “Puncturing tools are made from a species of tree that’s very durable and resistant, while fishing probes are made from smooth, pliable stems of vegetation.

“In contrast to Gombe, the chimpanzees at Goualougo fray these probes with their teeth to manufacture a paint-brush-like tip, which makes the tool 10 times more efficient at capturing termites.”

And there may be a bigger picture. Figuring out how tool traditions are passed on and how this differs within and between species, Musgrave says, could help humans understand the emergence of cumulative culture during our own evolution.

“[I]deas and innovations accumulate over time, such that new generations inherit and learn to use technologies that are far more complex than any one individual could invent. Comparative studies give us insights into how technology came to be a defining aspect of human evolution.”

Originally published by Cosmos as The evolution of chimp skills