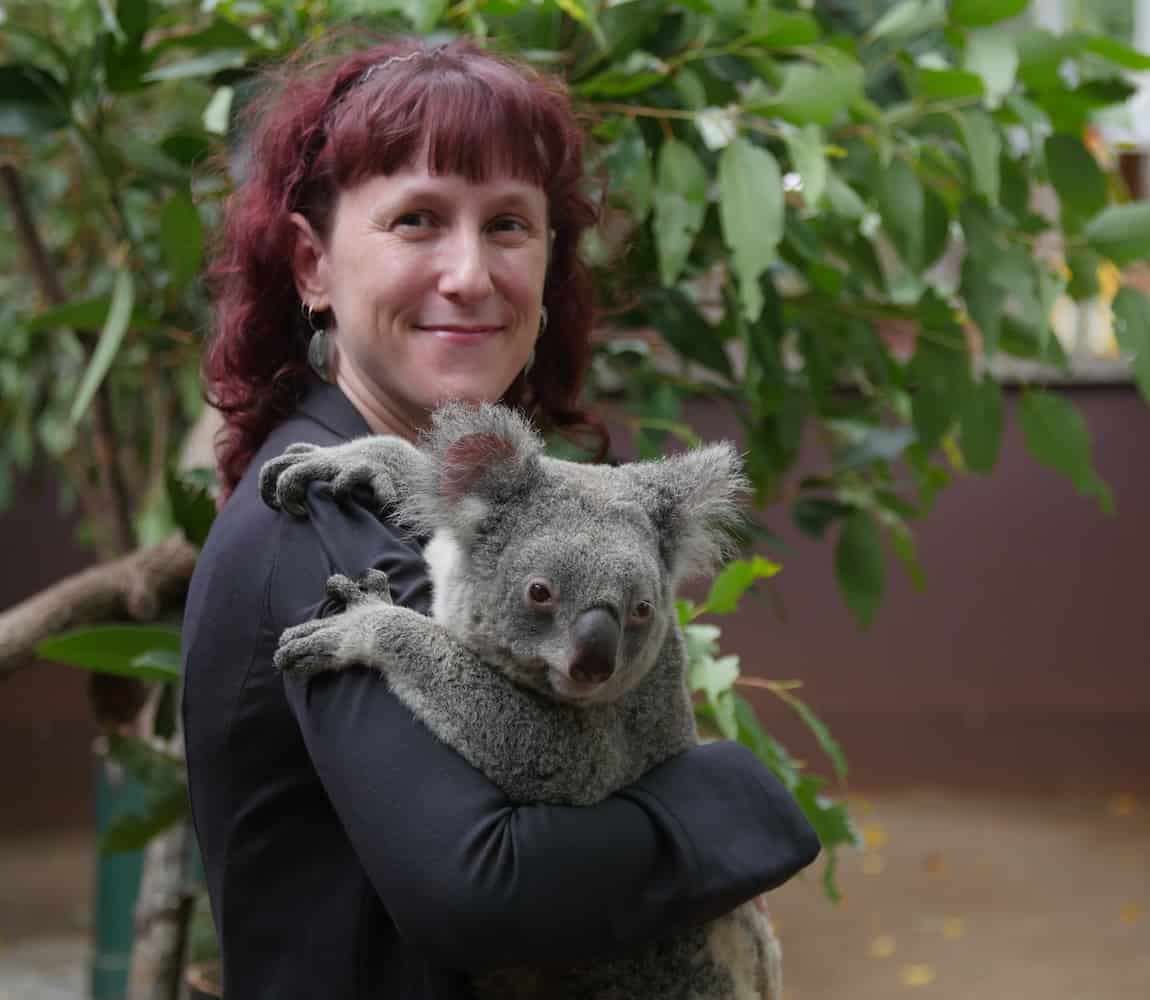 Tamara Keeley and a koala which may, or may not, be pregnant. Credit: STA

When an animal becomes pregnant, hormonal changes in its body help to prepare for the development, growth, and birth of a baby. If these hormone fluctuations can be detected, and are unique to pregnancy, then a test can be developed to detect them.

Humans take pregnancy tests for granted, but it turns out that ours is one of the few species for which it can be easily measured.

Marsupials pose a particular challenge, for example, because gestation can be as short as two weeks before an underdeveloped foetus is born – which then continues to grow in the pouch. This leaves precious little time for any hormone changes to be detected.

Tamara Keeley from Australia’s University of Queensland is one of the country’s leading experts in wildlife endocrinology and reproductive biology. She is working with her team to devise better techniques for detecting pregnancy is koalas (Phascolarctos cinereus), wombats (Vombatidae) and other marsupials.

“The most efficient way to detect pregnancy is through faecal or urine analysis, as it’s relatively easy to get samples when working with wild or captive animals,” Keeley says.

“It’s difficult to successfully breed some marsupials in captivity, so being able to determine when complications occur, when trying to get captive wildlife pregnant, makes it much easier to rectify the problem.”

Previously, Keeley worked with Tasmanian Devils (Sarcophilus harrisii) and found that the levels of a hormones in pregnant mothers’ faeces peaked towards the end of their gestation.

“Unfortunately, because the gestation of Tasmanian Devils is only 12 to 13 days, this happened in all females, even if they weren’t pregnant,” she explains.

“It is easier for the Tasmanian Devils’ reproductive system to assume pregnancy following every ovulation, as it is such a short gestation.

“As koalas have a gestation of 35 days, we hope that the longer time in the womb will mean we might be able to detect hormonal changes that are unique for pregnant mothers.”

Keeley’s student colleague, Jade Fernance, is looking to see whether pregnant koalas have unique changes in prostaglandin metabolite (PGFM) levels, a biomarker for pregnancy in many feline species.

“This will be a really exciting development for koala breeding,” says Fernance.

“As the koala foetus is so small, we can’t tell if koalas in our breeding program are not getting pregnant at all, or if they are giving birth and the foetus is lost at birth or dying in the pouch.

“Once we understand where it’s going wrong, we can work to fix it.”

Keeley says it’s often useful to look at other wildlife species for inspiration, because some might share similar reproductive and endocrine hormonal changes during pregnancy.

“We’re also looking for hormonal markers found in pregnant giant pandas (Ailuropoda melanoleuca) to see whether there are similar indicators in wombats.

“With comparable gestation times and other similarities, we think there might be some promising avenues to explore.”

Tamara Keeley is among 30 Superstars of STEM featured in this weekly series prepared by Science & Technology Australia (STA) – to learn more about the program, visit the STA website.

Originally published by Cosmos as Searching for marsupial pregnancy secrets