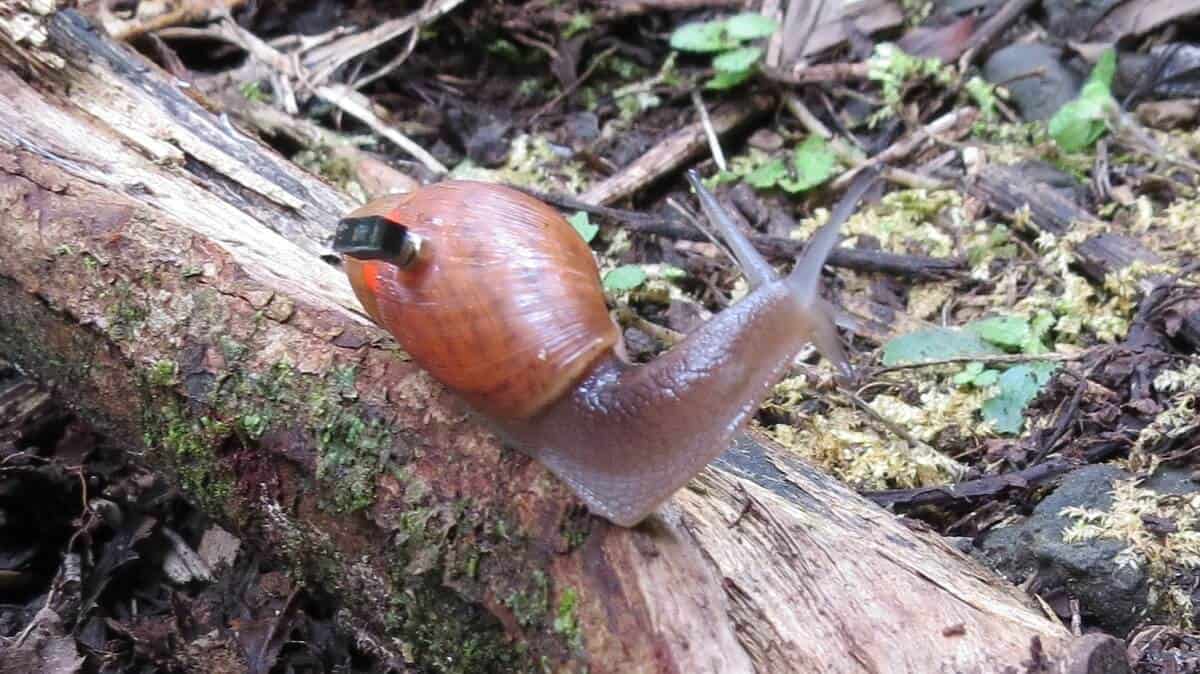 Snails carrying the world’s smallest computers on their shells have helped explain the mystery of their own survival against all odds.

The Society Islands of the South Pacific, a lush tropical archipelago forming part of French Polynesia, were once home to at least 61 species of tree snail. But after the giant African land snail was introduce to the islands it rapidly became a pest, so agricultural scientists introduced the rosy wolf snail in 1974 to cull the land snail population.

This decision made the native tree snails an easy target, and most disappeared, snubbing out their unique evolutionary stories. One plucky species of tree snail however, Partula hyalina, survived, leading scientists to wonder why.

Now, a collaboration between University of Michigan biologists and a team of engineers who designed the world’s smallest computer have demonstrated that P. hyalina survived the onslaught because its unique, white shells – a prized decorative and cultural emblem in Polynesia – allowed it to occupy the forest fringes where it was bathed in sunlight, something other snail species cannot tolerate.

The Michigan Micro Mote (M3), considered the world’s smallest complete computer, was announced in 2014 by a team co-led by David Blaauw, Professor of Electrical Engineering and Computer Science. This new discovery is the first time it’s been used in the field.

Researchers Cindy Bick and Diarmaid Ó Fioghil glued the sensors directly onto rosy wolf snails, but could not attach them to P. hyalina because of its endangered status, so they placed M3s on top of and underneath the leaves harbouring the resting snails.

They measured light intensity by measuring how long M3 took to recharge using solar power. The team discovered that at midday, P. hyalina were receiving on average ten times more sunlight than the rosy wolf snails. They hypothesise that rosy wolf snails won’t venture to the edge of the forest – even at night – because escaping before the sun became too hot would be impossible.

We were able to get data that nobody had been able to obtain,” says Blaauw. “And that’s because we had a tiny computing system that was small enough to stick on a snail.”

“The sensing computers are helping us understand how to protect endemic species on islands,” says Cindy Bick, a researcher on the project. “If we are able to map and protect these habitats through appropriate conservation measures, we can figure out ways to ensure the survival of the species.”

“The M3 really opens up the window of what we can do with invertebrate behavioural ecology and we’re just at the foothills of those possibilities,” says Ó Foighil.