Group: Icons. Family Myrmecobiidae. Numbats are most closely related to dasyurid marsupials and the thylacine.

Habitat: Numbats once occurred across southern Australia, from the west coast into western New South Wales. Today only two natural populations of numbats persist, both in Western Australia, although several populations have been successfully re-introduced into parts of their historical range.

Superpower: Numbats are true sun-loving West Aussies! They have specialised fur that traps heat from the sun, giving them the highest solar heat gain of any mammal.

Numbats are remarkable Australian mammals; so remarkable that they are classified into their very own marsupial family and are the faunal emblem of Western Australia. Numbats are unmistakable, with their elongated snout, bold black and white stripes on the hindquarters, a bottlebrush tail, and black and white face markings. Despite their stunning appearance, numbats are extremely cryptic and hard to find amongst the leaf litter of their woodland habitat. They are exclusively termitivorous, eating 22,000 termites a day!

Unlike almost all other marsupials, numbats are only active during the day. Termites are most active during warm, sunny daytime conditions, so this is when numbats are out and about foraging. Numbats use their keen sense of smell to locate termites underground or in bits of rotting wood. They expose their prey by digging with their forepaws while sitting on their hindfeet, and then lick up the termites with their long tongue, which is covered with sticky saliva. Their salivary glands are so big that they extend down into the chest.

Termites are a low-energy food source, so numbats have to conserve energy by using their fur, sleeping in insulating nests, and using torpor to reduce the energetic costs of maintaining a high body temperature. Numbats have sparse, shallow outer fur with a dense undercoat that traps more solar heat at the skin than the fur of any other mammal. The overnight temperature in a numbat’s burrow or hollow is 5°C warmer than outside. Combined with the “sleeping bag” effect of a nest, this saves them one-third of a numbat’s daily energy needs, meaning they have to find 7,400 fewer termites each day. A numbat’s body temperature can drop to 19°C during torpor, and they can stay torpid for over 15 hours, reducing their foraging requirements by an additional 9,400 termites a day.

Numbats breed during summer, and the young are born after only 14 days’ gestation. After birth, the four young attach to the mother’s nipples. Although numbats are marsupials, they don’t actually have a pouch. Instead, females have stiff, crimped hair in the area, which offers the young some protection during the six months they remain attached to their mum. In winter, the young are deposited in a burrow or hollow log; they cling to Mum’s back to move between nests. By September, the young start to forage for themselves, and are independent by November, moving off to establish their own 50-hectare home ranges.

Sadly, the beautiful and unique numbat is endangered. The species’ historical distribution contracted dramatically with the arrival of Europeans and associated changes in land use, fire and introduced species. Only two natural populations persist, in eucalypt forests at Dryandra and Perup in the south-west of Western Australia. These sites are characterised by a high density of hollow logs and an abundance of Gastrolobium or “poison pea” plants, which presumably reduce the impact of feral predators. Encouragingly, numbat numbers have increased recently thanks to feral predator control, and both wild and captive-bred numbats have been successfully re-introduced to some areas within their historical range.

Originally published by Cosmos as Numbat: an iconic sun-seeker and termite-eater 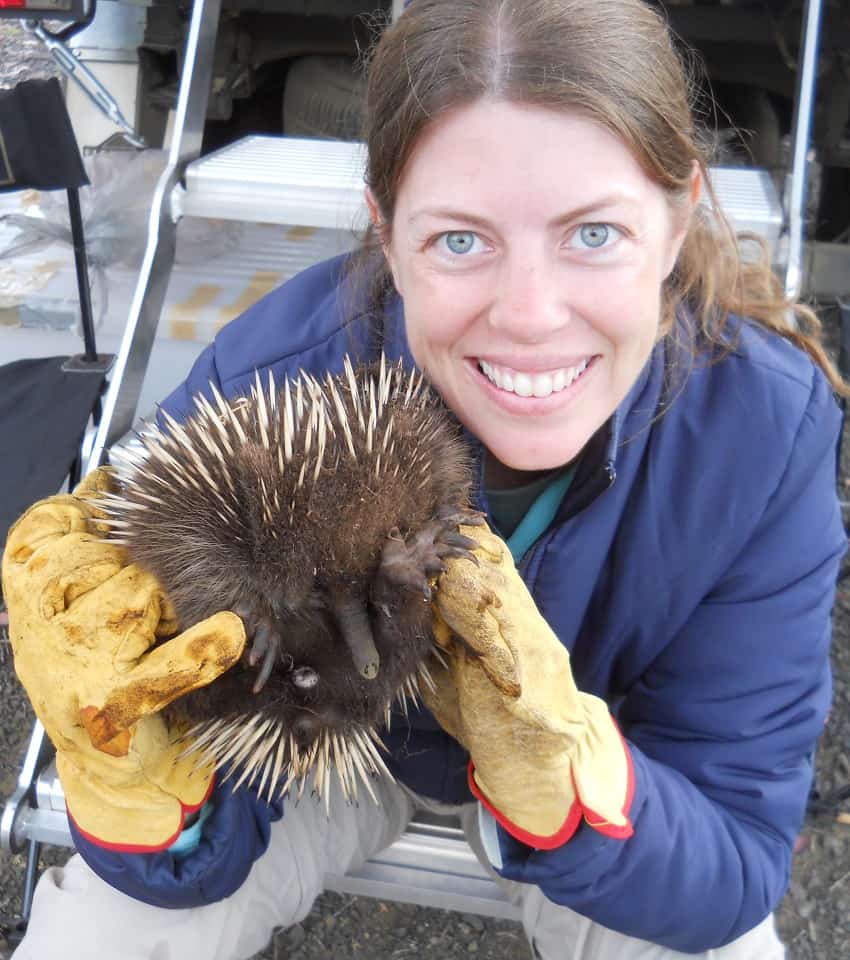 Dr Christine Cooper is a research and teaching academic at Curtin University in Perth, Western Australia. She specialises in the environmental and conservation physiology of mammals and birds, with a particular interest in the biology of ant and termite-eating mammals.