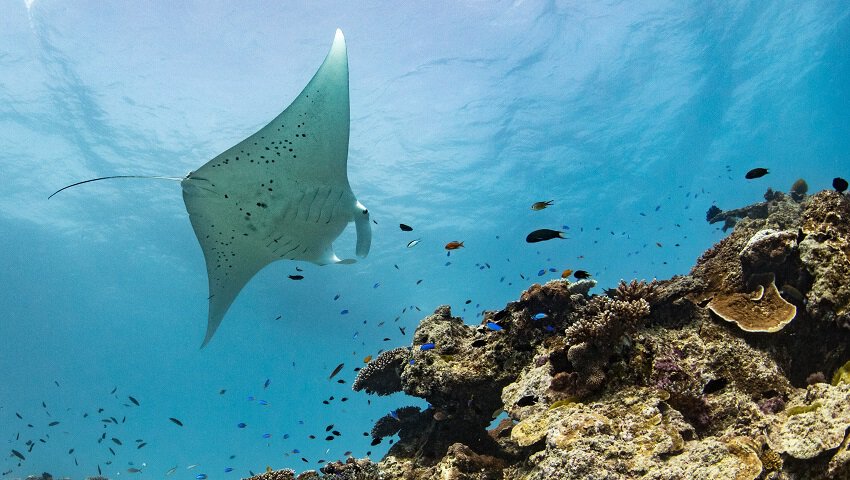 Marine researchers from Australia’s University of Queensland have discovered four new species of walking shark and a number of missing manta ray populations.

The first success, reported in the CSIRO’s Marine and Freshwater Research journal, increases to nine the number of known species of sharks that use their fins to walk in very shallow water during low tides.

And Christine Dudgeon and her colleagues are confident there are more waiting to be found.

The newly discovered sharks (in the genus Hemiscyllium) live in coastal waters around northern Australia and New Guinea and the research team believes their ability to walk evolved after they became genetically isolated.

“They may have moved by swimming or walking on their fins, but it’s also possible they hitched a ride on reefs moving westward across the top of New Guinea, about two million years ago.”

Sharks they may be, but the only creatures that should be concerned are small fish and invertebrates.

“At less than a metre long on average, walking sharks present no threat to people but their ability to withstand low oxygen environments and walk on their fins give them a remarkable edge over their prey of small crustaceans and molluscs,” Dudgeon says.

The second project, described in the Journal of Fish Biology, made use of the more than 11,000 manta ray sightings recorded on UQ’s Project Manta database.

This allowed Amelia Armstrong and her colleagues to confirm a continuous distribution of reef and oceanic manta rays (Mobula alfredi and Mobula birostris) north of Shark Bay in Western Australia around to Coffs Harbor in New South Wales.

“Prior to this study, official reef manta ray distribution maps showed the species as absent from Australia’s northern coastline between the east and west coasts,” Armstrong says.

“It can be challenging to find confirmed sightings of manta rays in Australia’s north as the coastline is vast and sparsely populated.”

The researchers are now hoping to look at whether there are a number of smaller groups or a single interbreeding population.

“In Australia, the species is protected, however we don’t yet have a clear idea of how well-connected populations are, or even what their population size trajectories are,” says Armstrong.

“Outside of aggregation sites, the species is really tricky to study, and this research is the first step in our ongoing efforts to assess reef manta population trends and movements.”

The latest assessment from the International Union for Conservation of Nature lists manta rays as vulnerable to extinction.

“In some places declines are up to 90% in the last three generations, likely due to fishing targeting them for use in traditional Chinese medicine,” says Armstrong.

Originally published by Cosmos as New sharks and rediscovered rays