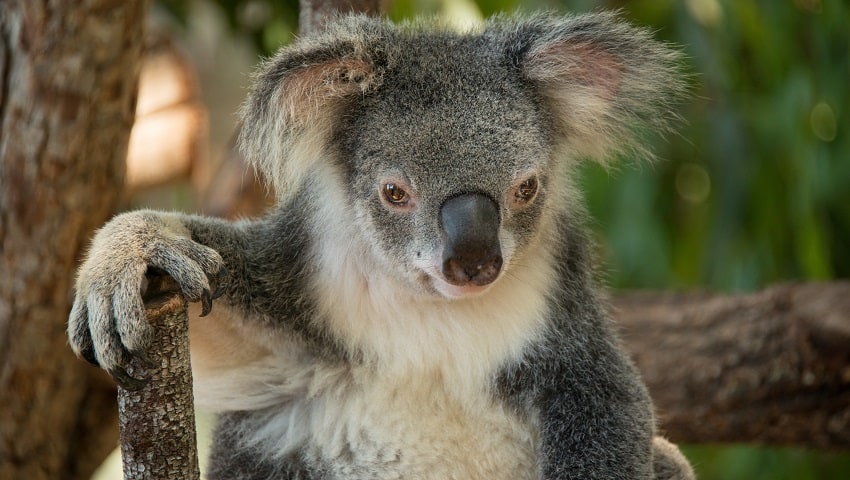 They may be classed as a marsupial, but koalas have evolved grasping hands and long limbs reminiscent of primates. Credit: Kate Berry

Australia’s cuddly koala seems to have evolved tree clambering abilities that rival those of the apes and monkeys that never made it to the continent.

Technically a marsupial – bearing its young in a pouch like kangaroos and wombats – the koala (Phascolarctos cinerus) has relatively long limbs with two thumb-like digits on powerful grasping hands and feet, and is more comfortable in the trees than on the ground.

Christofer Clemente, from the University of the Sunshine Coast, and colleagues were therefore curious to know whether it uses the same movement strategies as tree-dwelling primates.

This is causing bigger spaces between trees and greater risk of predation, dog attacks or being hit by cars when they need to travel between patches of eucalypt trees to find water or look for mates.

As described in the Journal of Experimental Biology, the researchers ran experiments at Queensland Zoo’s Wildlife HQ, filming six koalas in their semi-natural enclosures using several high-speed cameras synchronised to give a 3D reconstruction of their movements.

This took a few months, because koalas spend a lot of time sleeping. They also moved straight to the nearest tree when placed on the ground – even attempting to climb up the team’s tripods.

Eventually, the researchers gained around 40 minutes of footage from more than 200 videos, from which they analysed 198 movements on the ground, ascending and descending and moving along a narrow horizontal beam.

They found that, unlike other mammals such as cats and dogs that use two legs from the same side to support each other, koalas use a gait that allows greater stability from diagonally opposite leg pairs when climbing.

“As far as we can tell, they are the closest thing we have to primates in Australia,” says Clemente, “likely because of the similar gripping structures on the hand. They do this more so than other tree species like possums, from which they share a common ancestor.”

Unlike primates, though, their speed was more consistent with their sleepy demeanour, only reaching 2.5 kilometres per hour – although they were surprisingly agile.

“We occasionally saw leaps of over one metre from branch to branch, or a koala moving along a branch while hanging underneath just using their forelimbs,” says Clemente.

On the ground their movements were more like marsupials, walking then bounding like rabbits with their hind feet synchronised to meet the ground at the same time. This is unlike the gallop used by many primates when moving quickly.

Here, they achieved speeds of up to 10 kilometres per hour – relatively slow for their body mass, but possibly slower than speeds they are capable of, the authors suggest.

Their speed is however limited by their low energy diet of eucalyptus leaves, Clemente notes, adding that a better understanding of koala locomotion could help provide insights into which habitats are most important targets for conservation efforts.