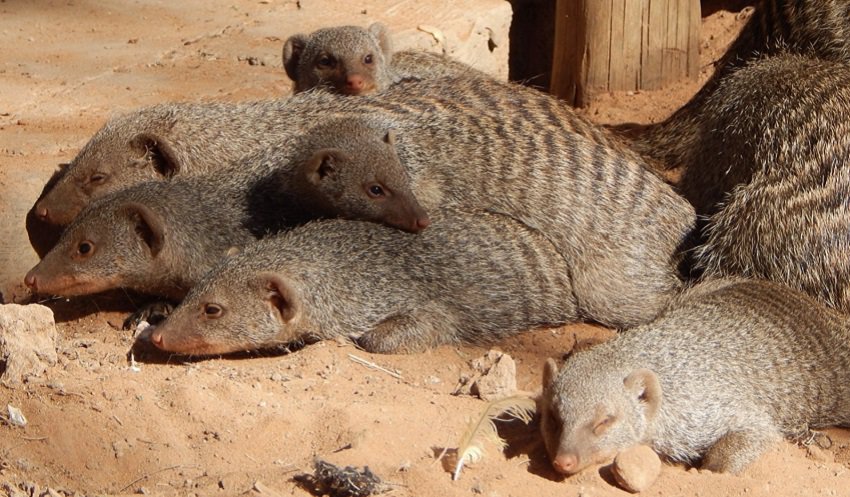 By watching banded mongoose populations across a range of different environments in Botswana, Africa, researchers have gained insights into how the interaction between behaviour and landscape influences the spread of infectious disease.

“We are increasingly aware of the importance of behaviour in predicting infectious disease spread,” says first author Kathleen Alexander from the Virginia Polytechnic Institute and State University, US.

These considerations are relevant for attempts to predict the spread of COVID-9 across the globe, as well as the transmission of infectious diseases from animals to humans.

Banded mongoose (Mungos mungo) presented an ideal model to explore and understand links between environment, behaviour and the spread of a novel tuberculosis (TB) pathogen, Mycobacterium mungi, related to human TB, that is transmitted through scent marks.

“Animals communicate with scent marks that contain signals that other animals will investigate to obtain information,” Alexander explains. “So as mongoose communicate, they can also transmit the disease if they are infected.”

As part of a long-term study of banded mongoose, she and co-author Carol Anne Nichols used radio collars and camera traps to monitor the social critters and their behaviours, as described in the journal Frontiers in Ecology and Evolution, focussing on olfactory communication behaviours and vigilance in watching out for predators or competitors.

Results showed that land type had a notable influence on the interaction between vigilance and scent marking behaviour.

In landscapes like urban centres or national parks, where the threat of injury or death is higher, mongoose were keenly vigilant – watching for threats and engaging in less olfactory communication and hence likely spreading less pathogens.

“If you’re running from a predator, you’re not stopping to leave a message for other animals,” explains Nichols. “You’re running for your life.”

But at tourism lodges where there were few predators and more food left by humans, competition was more intense and vigilance was associated with the detection of competitors, defence of resources and increased olfactory communication.

These results are interesting because banded mongoose are social animals and live in territories, Alexander notes. The scent marking behaviour causes pathogens to cross territorial boundaries because individuals from other territories come to smell the olfactory clues.

“But, as we found here, it matters where an animal lives and how it behaves in that environment,” says Alexander.

“These interactions can create superspreading landscapes, that is areas where due to behaviour-landscape interactions, pathogen spread might be increased, changing infectious disease spread.”

There are two ways this can help us understand disease spread in humans, she explains.

First, as land type can influence behaviour in both humans and animals, we need to understand these dynamics in order to anticipate and manage factors that could increase disease spread and exploit them to decrease pathogen movement.

Next, as dwindling space and habitats cause humans and wildlife to increasingly overlap, the threat of infectious disease is likely to increase like we are seeing now, so this understanding could also be critical for helping to predict disease outbreaks and control their spread.

Alexander explored the interface between humans, pets and wild animals in another paper published in the journal Frontiers in Ecology and the Environment, presenting a model that shows how we can influence susceptibility to and spread of pathogens.

She concludes, “Human behaviour may be the key that unlocks the proverbial Pandora’s Box, allowing infectious diseases to emerge.”