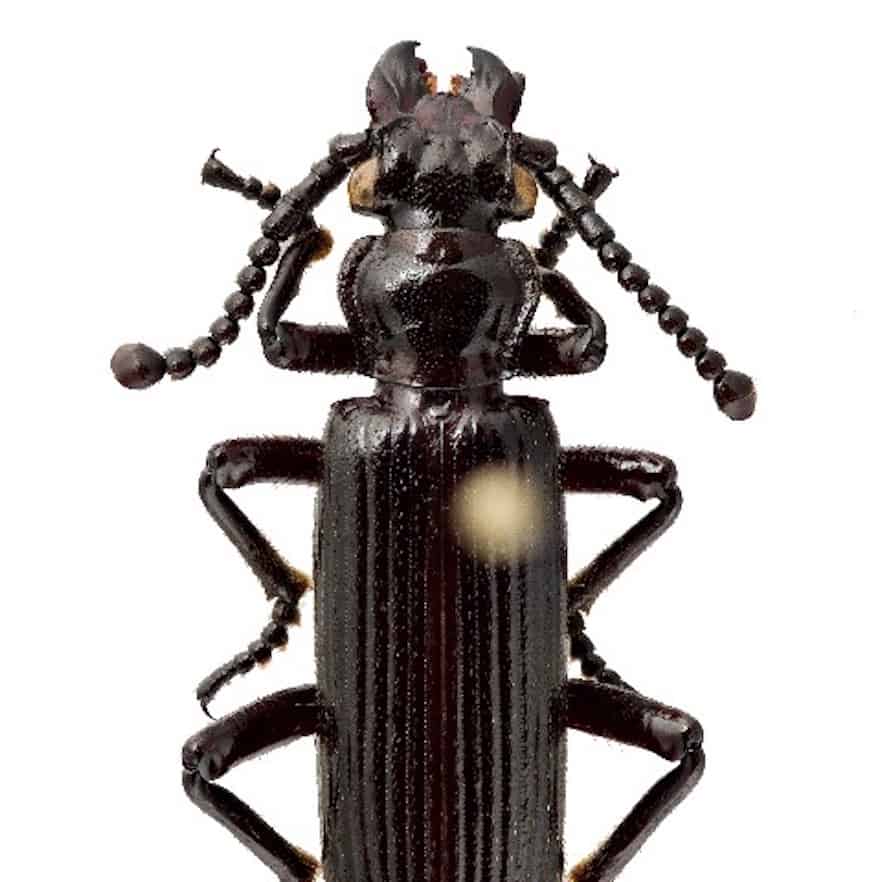 Ant smoothie, anyone? A species of ground beetle subsists entirely on a liquid diet, sucked from carpenter ants (Camponotus spp). The young of this species also hunt ants, not by external ambush, but by devouring larvae within the nest.

Living off ants is not unknown. Indeed, it even has a name: myrmecophily.

Beetles in the Paussus genus, aptly named ant nest beetles, are the recognised poster-insects for the process. They live inside the nests of their prey, and have a wide range of morphological, chemical and acoustical adaptations for this lifestyle.

Essentially, it adds up to a somewhat nefarious combination of suitable armour, pheromone trickery and even the production of attractive substances as a form of bribe. The nearly immobile Paussus larvae lie around in their chosen ant nests, and feed simply by leaning over and sucking the juices from their neighbouring ant brood.

But researchers suspected that the genus members were not alone in their food preferences. They suspected that a particular species of rarely seen ground beetle in the Ozaena genus had a similarly close association with ants.

Adults and larvae in this genus resemble other free-living ground beetles, hunting adult ants outside the nest.

Their larvae have a novel way of preying upon the insects – they ambush them by springing out of a burrow that at other times they protect using a shield-like structure on their heads.

It is tricky to study the lives of beetles and ants, so Wendy Moore, from the University of Arizona, US, and Andrea Di Giulio, from the University of Roma Tre, Italy, undertook a comparative anatomy of three life history stages of Ozaena: egg, larva and adult. They also compared O. lemoulti to the closely-related Goniotropis beetle, which is known to be a free-living, burrow-digging predator.

The beetles live in riparian oak woodland in Arizona, and are rarely seen. Over the past two decades, only six specimens of Ozaena lemoulti have been collected by the lead author. Ozaena samples collected included a live adult female who laid a single egg which subsequently hatched.

Moore and Di Guilio’s examination of the first instar larva of O. lemoulti revealed morphological adaptations completely different to other larvae of the Ozaena genus.  It had mouthparts similar to those of ant nest beetle larvae, suitable for soft prey, like baby ants. But unlike the nearly immobile ant nest beetle larvae, O. lemoulti had long legs. The researchers hypothesised that the young feed by running around within the ant nest – a previously unknown feeding strategy for ant nest parasite beetles.

Examination of egg morphology, and comparison with the Goniotropis beetle egg, also suggested O. lemoulti remained in the ant nest environment even at the first stage of life. The egg case lacked the spongy air layer of Goniotropis eggs which protects against extreme weather conditions. It is thus well suited to the humid environment of the nest.

The gut sampling of O. lemoulti adults revealed that the beetles appear to exclusively feed on ant fluids, unlike Goniotropis adults – and just like the ant nest beetles.

The research, published in the journal PLOS One, reveals that Ozaena lemoulti, independently of Paussus ant nest beetles, has adopted a whole new obligate parasite strategy for living with and feeding on ants – at every life stage .