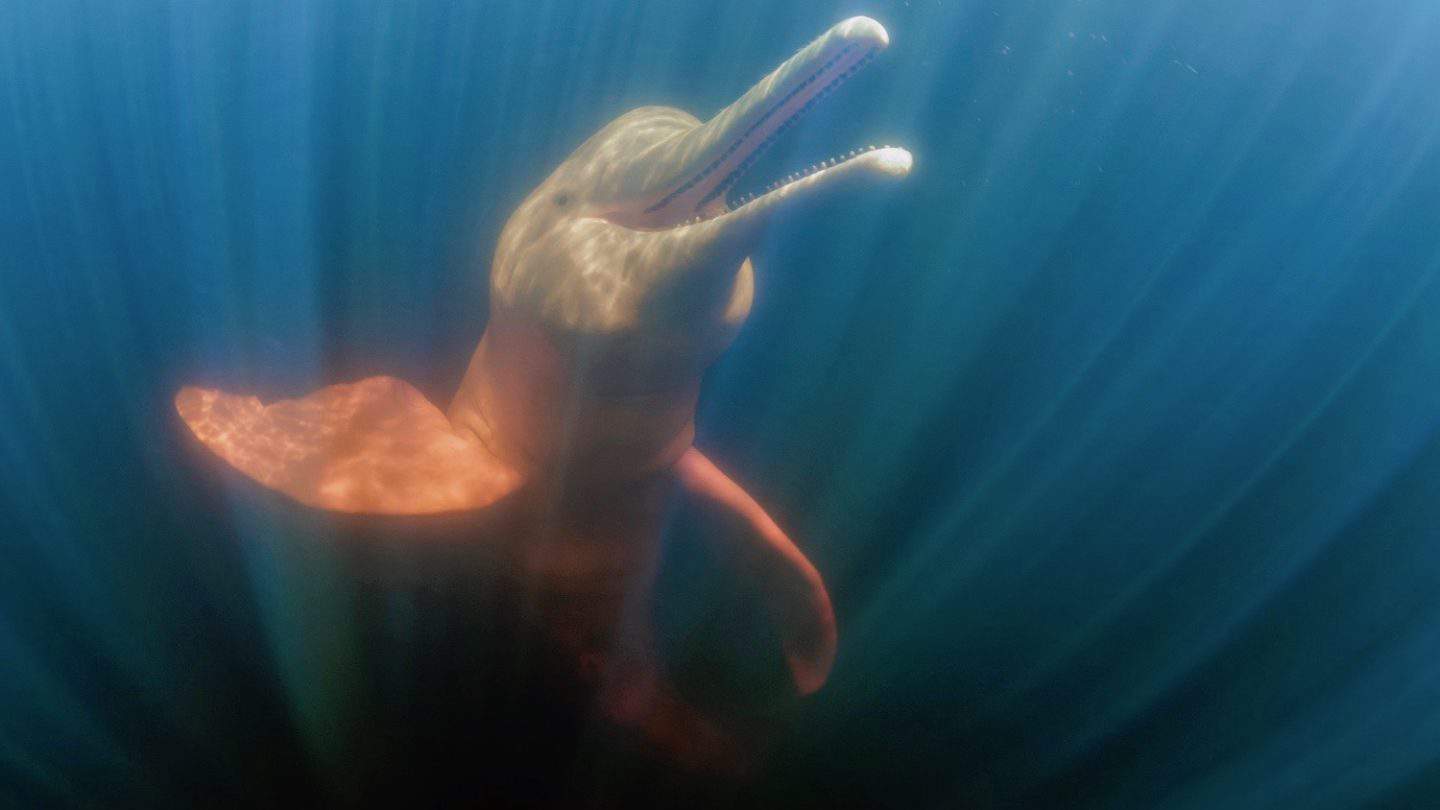 An Amazonian river dolphin, like the closely related Araguaian species, is thought to be an evolutionary relic. Credit: Danita Delimont/ Getty Images

A rare river dolphin thought to be solitary and mostly silent has been revealed to make hundreds of sounds, raising questions about the evolution of communication in marine mammals.

A major constraint in studying river dolphin behaviour is that, unlike their marine relatives, they do not perform conspicuous surface displays, making identification of individuals in the field very difficult. Araguaian dolphins are also shy, moving away from observers to hide in the complex habitat of river vegetation.

Now, a unique opportunity has allowed researchers to study a small group of the mammals, which regularly visits a fish market in the Araguaia-Tocantins river system in Brazil.

The study, led by Laura May-Collado from the University of Vermont, US, combined acoustic technology with underwater behavioural observations as the dolphins came to the market to be fed by locals and tourists.

The river dolphin genus has been little studied, so the researchers expected to find more acoustic signals than those previously recorded – but, even so, the results were a big surprise.

Underwater recordings were taken at the same time as video footage, resulting in 15.7 hours of acoustic material.

Information such as sex, age and natural marks on the dorsal and ventral parts of the body were recorded, as well as specific behaviours. More than half of the studied animals were able to be identified as individuals.

Back in the lab, the sound recordings were first subjected to a spectrographic analysis. All whistles and pulsed calls were selected for further examination using a program called ARTwarp. Sounds were categorised according to duration and the presence of non-linear phenomena such as subharmonics or biphonation.

The findings, published in the journal PeerJ, reveal that rather than being mostly silent as previously assumed, vocal communication in Araguaian dolphins is on par with that of their talkative marine counterparts.

Even though the team captured 727 good quality acoustic signals resulting in 237 sound types, May-Collado believes that the sample size was not enough to capture the entire repertoire.

“We found that they do interact socially and are making more sounds than previously thought,” she says. “Their vocal repertoire is very diverse.”

The most common sound made was a short two-component call, produced by baby dolphins when they approached their mothers after a short separation.

“It’s exciting; marine dolphins like the bottlenose use signature whistles for contact, and here we have a different sound used by river dolphins for the same purpose,” adds May-Collado.

The pitch of calls was also unique, falling in between the high-frequency clicks and whistles of toothed whales and dolphins, and the low-frequency calls of baleen species.

May-Collado speculates that the riverine habitat has been a driver in the evolution of the intermediate frequency.

“There are a lot of obstacles like flooded forests and vegetation in their habitat, so this signal could have evolved to avoid echoes from vegetation and improve the communication range of mothers and their calves,” she says.

The non-linear nature of the call recordings, including sub-harmonics and biphonation, is similar to that of toothed whales such as long-finned pilot whales (Globicephala melas).  These acoustic complexities are thought to carry information on group identity and maintaining social cohesion, and even an individual’s identity or emotional state.

River dolphins are known as “evolutionary relics”, and their evolutionary history still a matter of debate. One hypothesis posits that their ancestors were coastal marine species that were subsequently stranded in freshwater systems when sea levels dropped during the middle Cenozoic period, around 20 million years ago.

Given that most of the behavioural interactions and calls of the Araguaian dolphins observed were between mothers and babies, rather than complex, across-group social calls, May-Collado and colleagues believe their findings can shed light on how communication evolved in marine mammals.

“These signals could have evolved early in the evolutionary history of toothed whales as social calls, likely as mother-calf contact calls,” the researchers write, “and that later in the lineage, its function evolved to group or family recognition.”

There is still more work to do. Studies need to be undertaken in areas where the mammals are not habituated to humans in order to verify possible differences between populations with and without contact with humans. In addition, the acoustic communication behaviour of other genera of river dolphins need to be studied.

“We can’t say what the evolutionary story is yet until we get to know what sounds are produced by other river dolphins in the Amazon area, and how that relates to what we found,” May-Collado adds. “We now have all these new questions to explore.”