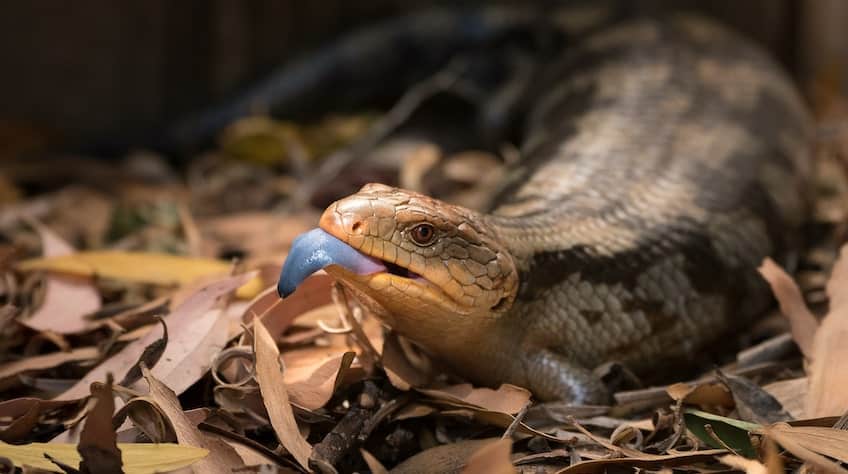 The blue-tongue lizard, an iconic Aussie species, has developed resistance to the venom of the red-bellied black snake. Image credit: James Stone/Getty Images
More on:
snakes

The humble blue-tongue lizard, an iconic Aussie species, is resistant to the venom of the deadly red-bellied black snake, according to new research from the University of Queensland (UQ).

The surprising find, detailed in a study out yesterday in the journal Toxins, was made when UQ scientists looked to compare the effects of various reptile blood plasmas when exposed to the venom. UQ researcher and study co-author Nicholas Youngman says mammalian – and especially human – reactions have been widely studied, but very little is known about the effects of snake venom on other reptiles.

“It was a shock discovering that the eastern blue-tongue, along with the shingleback, showed resistance specifically to red black snake venom,” Youngman says.

“Since their resistance was so specific to only this snake species, it seems these lizards have evolved a special plasma component – known as a serum factor – in their blood. This prevents specific toxins in red-bellied black snake venom from clotting the lizards’ plasma, which would lead to a rapid death in most other animals.”

Their resistance doesn’t make the lizard totally immune, but it does give them a greater chance of survival, something Youngman likens to the workings of a vaccine.

Read more: How snakes got their fangs

The research team analysed the effects of red-bellied black snake venom on two species of blue-tongued skinks and three species of monitor lizards that are known to interact with the snakes in the wild.

Co-author Bryan Fry, who heads up UQ’s Venom Evolution Lab, says the results also showed that monitor lizards (otherwise known as goannas) – which eat these venomous snakes – are not resistant to the venom.

“You’d think that a goanna would be significantly resistant to the venom of any snake it was hunting and eating, but that isn’t the case,” Fry says.

“Snake venom can only cause harm to goannas if it’s injected into its body by the snake’s fangs – it can’t be absorbed directly through the skin. Goannas are heavily armoured and their scales act like medieval chain mail, with each containing a piece of bone, meaning venomous snakes’ fangs struggle to pierce this armour.

“Unlike the slow, vulnerable blue-tongue lizard, there’s no pressure for goannas to evolve resistance; natural selection has invested in their armour and it’s clearly working for them.”

Perhaps most fascinating thing about the results, the authors note, is the differentiated pressure to evolve responses to venom on different sides of the predator-prey arms race.

Originally published by Cosmos as Lizard vs snake: Venom showdown