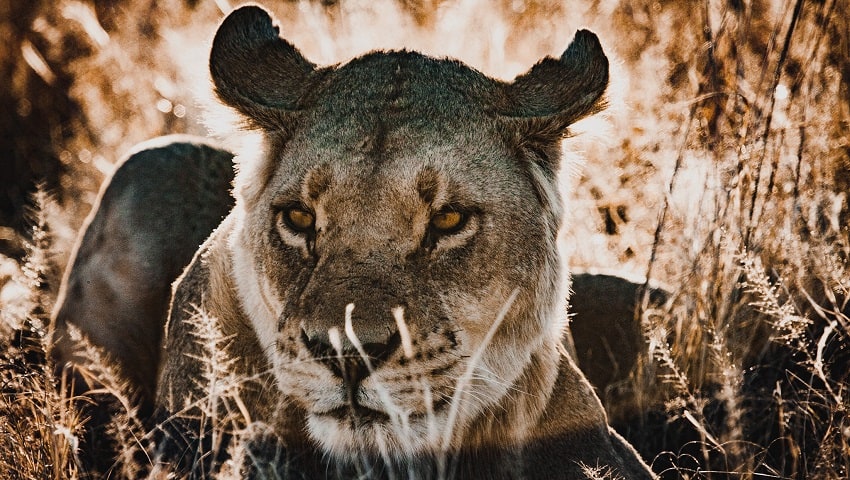 We should be wary of assuming that genetic diversity loss in wildlife is always caused by humans, suggests a new study by the Zoological Society of London (ZSL) and Imperial College London.

Analysis of 149 southern African lions (Panthera leo) in the Kavango-Zambezi Transfrontier Conservation Area (KAZA) in northern Botswana between 2010 and 2013 shows diversity loss across the population was in fact caused by the need to adapt to differing habitats.

“The findings have important applications for wildlife managers across Africa,” says ZSL’s Simon Dures, lead author of a paper in the journal Animal Conservation.

“It means translocations of animals, post human-wildlife conflict for example, need to be carefully considered with regards to their genetic predisposition to their new environment.”

Dures and colleagues used 20 microsatellites to investigate the genetic structuring of their study group.

They found two quite different populations, divided by an “apparently unobstructed boundary”, and each at home in a distinct habitat: “wetland lions” residing in the Okavango Delta and “dryland lions” living in the semi-arid habitat of the Kalahari Desert.

The wetland populations were found to be incredibly well adapted to their environment.

“They’re strong swimmers and seem to thrive in water chasing buffalo down for a kill, which is the opposite for other lions in Africa, which would not typically hunt in water,” Dures says.

“Moving these animals into a semi-arid environment could be detrimental to their survival.

“Animals need to be able to move freely in order to maintain a level of genetic diversity that builds resilience to changes in their environment caused by climate change, and we think this ecologically-induced separation of the lions pre-dates western Europeans colonisation of southern Africa, so has likely been developing for a long time; way before people came with their fences and hunting.”

If a separate population is created but cut off from its original source group – whether by ecological or human barriers – over time there will be less gene flow from lack of breeding between the populations, the researchers say.

While a larger more connected population would generally have greater genetic diversity, small amounts of movement between them can maintain diversity while preserving adaptations that allow them to thrive in two different environments.

Though not different enough to be classified as separate sub-species and still having slight genetic movement between the populations, it suggests a phenomenon called phenotypic plasticity – animals adapting in various ways to suit the environment they’re in.

People aren’t completely off the hook, however.

“Although we didn’t find humans to be the driving force here, it doesn’t mean to say they aren’t having any effect,” Dures says.

“Impacts such as persecution or increased development could lead to exacerbating inbreeding and threatening the future of these specially adapted lions.”