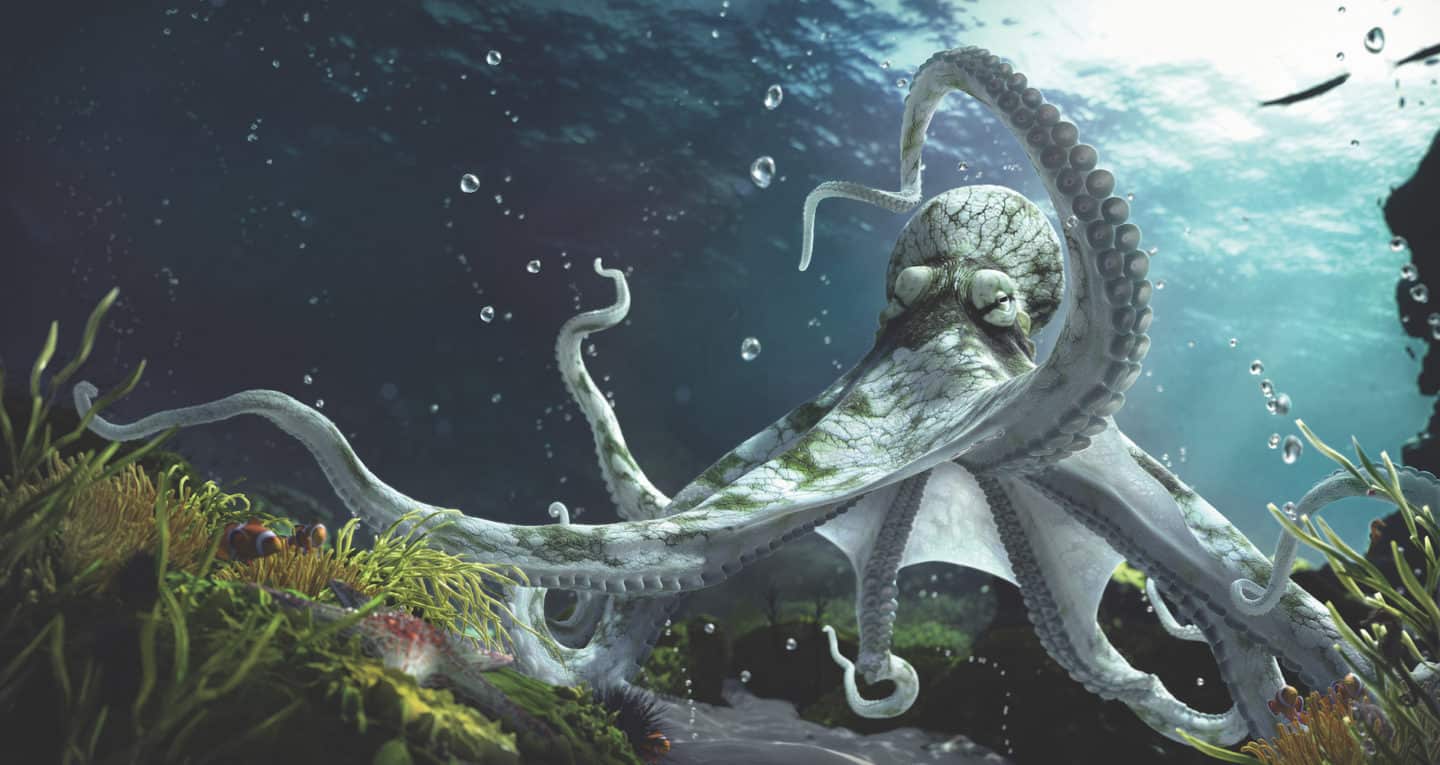 In 2008 the staff at Sea Star Aquarium in Coburg, Germany, had a mystery on their hands. Two mornings in a row, they had arrived at work to find the aquarium eerily silent: the entire electrical system had shorted out. Each time they would reset the system only to find the same eerie silence greeting them the next morning. So on the third night a couple of staff members kept vigil, taking turns to sleep on the floor. Sure enough the perpetrator was apprehended: Otto, a six-month-old octopus.

He had crawled out of his tank and, using his siphon like a fire hose, aimed it at the overhead light. Apparently it annoyed him or maybe he was just bored. As director Elfriede Kummer told The Telegraph, “Otto is constantly craving for attention and always comes up with new stunts… Once we saw him juggling hermit crabs in his tank”.

Anecdotes of the mischievous intelligence of octopuses abound. Individuals have been reported to solve mazes, screw open child-proof medicine bottles and recognise individual people. Keepers are inclined to give them names because of their personalities.

Problem solving, tool use, planning, personality: these are hallmarks of the complex, flexible intelligence that we associate with back-boned animals, mostly mammals.

But a squishy octopus?

Some researchers who study the octopus and its smart cousins, the cuttlefish and squid, talk about a ‘second genesis of intelligence’ – a truly alien one that has little in common with the mammalian design.

While the octopus has a large central brain in its head, it also has a unique network of smaller ‘brains’ within each of its arms. It’s just what these creatures need to coordinate the mind-boggling complexity of eight prehensile arms and hundreds of sensitive suckers, which provide the octopus with the equivalent of opposable thumbs (roboticists have been taking note). Not to mention their ability to camouflage instantly on any of the diverse backgrounds they encounter on coral reefs or kelp forests. Using pixelated colours, texture and arm contortions, these body artists instantly melt into the seascape, only to reappear in a dazzling display to attract a mate or threaten a rival.

“They do things like clever animals even though they’re closely related to oysters,” says neuroscientist Clifton Ragsdale, at the University of Chicago. “What I want to know is how large brains can be organised not following the vertebrate plan.”

So how did evolution come up with this second genesis of intelligence or what film-maker Jacques Cousteau referred to as ‘soft intelligence’ back in the 1970s?

Cousteau inspired many a researcher to try and find answers. But it has been hard to advance beyond Technicolor screenshots and jaw-dropping tales – what zoologist Michael Kuba at Okinawa Institute of Science and Technology (OIST) refers to as “YouTube science”.

For decades the number of octopus researchers could be counted on one hand. They were poorly funded, and their valiant efforts were held in check by notoriously uncooperative subjects and inadequate tools. “You really had to be a fanatic,” says Kuba.

In the last few years, with more and more researchers lured to these enigmatic creatures, the field appears to have achieved critical mass. And these newcomers are the beneficiaries of some powerful new tools. In particular, since 2015 they’ve had the animals’ DNA blueprint, the genome, to pore over. It has offered some compelling clues.

It turns out the octopus has a profusion of brain-forming genes previously seen only in back-boned animals. But its secret weapon may not be genes as we know them.

A complex brain needs a way to store complex information. Startlingly, the octopus may have achieved this complexity by playing fast and free with its genetic code.

To build a living organism, the decoding of the DNA blueprint normally proceeds with extreme fidelity. Indeed it’s known as ‘the central dogma’. A tiny section of the vast blueprint is copied, rather like photocopying a single page from a tome. That copy, called messenger RNA (mRNA), then instructs the production of a particular protein. The process is as precise as a three-hat chef following her prized recipe for apple pie down to the letter.

But in a spectacular example of dogma-breaking, the octopus chef takes her red pen and modifies copies of the recipe on the fly. Sometimes the result is the traditional golden crusted variety; other times it’s the deconstructed version – apple mush with crumbs on the side.

This recipe tweaking is known as ‘RNA editing’. In humans only a handful of brain protein recipes are edited. In the octopus, the majority get this treatment.

“It introduces a level of sophistication and complexity we never thought of. Perhaps it’s related to their memory,” says Eli Eisenberg, a computational biologist at the University of Tel Aviv. Though he quickly adds, “I must stress this is complete speculation”.

Jennifer Mather, who studies squid and octopus behaviour at the University of Lethbridge in Alberta, Canada, suggests it might go some way to explaining their distinct personalities.

There’s no doubt that linking octopus intelligence to RNA editing is the realm of fringe science. The good news is it’s a testable hypothesis.

Researchers are now gearing up with state-of-the-art tools such as the gene-editing technology CRISPR, new types of brain recorders and rigorous behavioural tests to see whether RNA editing is indeed the key to octopus intelligence.

How did the octopus get so smart?

Some 400 million years ago, cephalopods – creatures named for the fact that their heads are joined to their feet – ruled the oceans. They feasted on shrimp and starfish, grew to enormous sizes like the six-metre long Nautiloid, Cameroceras, and used their spiral-shaped shells for protection and flotation.

Then the age of fishes dawned, dethroning cephalopods as the top predators. Most of the spiral-shelled species became extinct; modern nautilus was one of the few exceptions.

But one group shed or internalised their shells. Thus unencumbered, they were free to explore new ways to compete with the smarter, fleeter fish. They gave rise to the octopus, squid and cuttlefish – a group known as the coleoids.

Their innovations were dazzling. They split their molluscan foot, creating eight highly dexterous arms, each with hundreds of suckers as agile as opposable thumbs. To illustrate this dexterity, Mather relates the story of a colleague who found his octopus pulling out its stitches after surgery.

But those limber bodies were a tasty treat to fish predators, so the octopus evolved ‘thinking skin’ that could melt into the background in a fifth of a second. These quick-change artists not only use a palette of skin pigments to paint with, they also have a repertoire of smooth to spiky skin textures, as well as body and arm contortions to complete their performance – perhaps an imitation of a patch of algae, as they stealthily perambulate on two of their eight arms.

“It’s not orchestrated by simple reflexes,” says Roger Hanlon, who researches camouflage behaviour at the Marine Biological Laboratory in Woods Hole, Massachusetts. “It’s a context-specific, fast computation of decisions carried out in multiple levels of the brain.” And it depends critically on a pair of camera eyes with keen capabilities.

It takes serious computing power to control eight arms, hundreds of suckers, ‘thinking skin’ and camera eyes. Hence the oversized brain of the octopus. With its 500 million neurons, that’s two and a half times that of a rat. But their brain anatomy is very different.

A mammalian brain is a centralised processor that sends and receives signals via the spinal cord. But for the octopus, only 10% of its brain is centralised in a highly folded, 30-lobed donut-shaped structure arranged around its oesophagus (really). Two optic lobes account for another 30%, and 60% lies in the arms. “It’s a weird way to construct a complex brain,” says Hanlon. “Everything about this animal is goofy and weird.”

Take the arms: they’re considered to have their own ‘mini-brain’ not just because they are so packed with neurons but because they also have independent processing power. For instance, an octopus escaping a predator can detach an arm that will happily continue crawling around for up to 10 minutes.

Indeed, until an experiment by Kuba and colleagues in 2011, some suspected the arms’ movements were independent of their central brain. They aren’t. Rather it appears that the brain gives a high-level command that a staff of eight arms execute autonomously.

“The arm has some fascinating reflexes, but it doesn’t learn,” says Kuba, who studied these reflexes between 2009 and 2013 as part of a European Union project to design bio-inspired robots.

And then there’s their ‘thinking’ skin. Again the brain, primarily the optic lobes, controls the processing power here. The evidence comes from a 1988 study by Hanlon and John Messenger from the University of Sheffield. They showed that blinded newly hatched cuttlefish could no longer match their surroundings.

They were still able to change colour and body patterns but in a seemingly random fashion. Anatomical evidence also shows that nerves in the lower brain connect directly to muscles surrounding the pigment sacs or chromatophores.

Like an artist spreading pigment on a pallet, activating the muscles pulls the sacs apart spreading the chromatophore pigments into thin discs of colour. But the octopus is not composing a picture. Hanlon’s experiments with cuttlefish show they are deploying one of three pre-existing patterns – uniform, mottled or disruptive – to achieve camouflage on diverse backgrounds.

As far as detailed brain circuitry goes, researchers have made little progress since the 1970s when legendary British neuroscientist J.Z Young worked out the gross anatomy of the distributed coleoid brain. Escaping Britain’s dismal winter for the Stazione Zoologica in balmy Naples, Young’s research was part of an American Air Force funded project to search for the theoretical memory circuit, the ‘engram’.

“They were ahead of their time,” says Hanlon, who experienced a stint with Young in Naples. Nevertheless they were limited by the paucity of brain-recording techniques that were suited to the octopus.

It’s a problem that has continued to hold back the understanding of how their brain circuits work. “Is it the same as the way mammals process information? We don’t know,” says Ragsdale.

It’s not for want of trying, as Kuba will tell you. In the 1990s, he joined the lab of neuroscientist Binyamin Hochner at the Hebrew University of Jerusalem. Hochner was a graduate of Eric Kandel’s lab, the Nobel laureate who pioneered studies on how the sea slug Aplysia learns.

All the action takes place in the gaps between individual neurons, the ‘synapse’. The synapse may look like an empty gap under the microscope but it’s a crowded place. It’s packed with over 1,000 proteins that assemble into a pinpoint-size microprocessor. If each neuron is like a wire, it’s up to this microprocessor to decide whether the signal crosses over from one wire to the next. When the sea slug learns a lesson, for instance withdrawing its gill in response to a tail shock, that’s because new computations at the synapse rerouted the connections.

Kuba, however, found an octopus to be far less obliging than a sea slug. Whatever electrical probe he stuck into its brain was rapidly removed thanks to all those opposable thumbs.  Ragsdale also had his share of frustration. “We have a technical proble

Originally published by Cosmos as How the octopus got its smarts