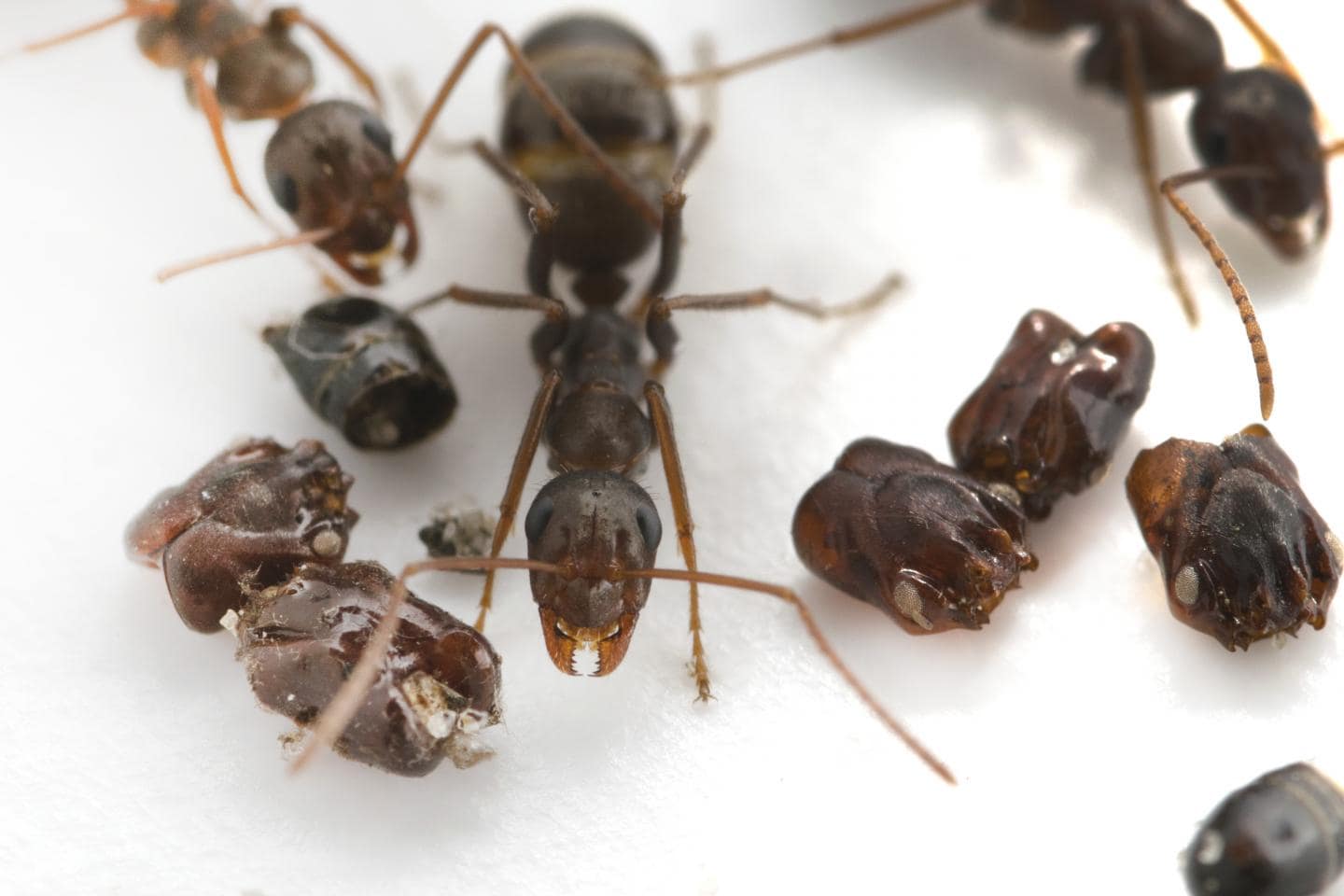 The net is closing on the Formica archboldi gang, which has been leaving the dismembered remains of another ant species scattered around the south-east of the US for decades.

We now know its modus operandi is to chemically mimic its prey then use what is normally a chemical defence – a spray of formic acid – to subdue them.

The twist in the tale is that ants in the family Formicidae are normally not known for preying on other species, and the victims in this case are trap-jaw ants (Odontomachus), which, as their name suggests, are usually not to be trifled with.

F. archboldi nests filled with Odontomachus heads have been found in and around Florida ever since the species was first described in 1958.

Scientists have speculated that either it is a very specialised predator, or it simply inherits old trap-jaw ant nesting sites. No one has had a detailed look at the biology, however, until now.

Adrian Smith from the North Carolina Museum of Natural Sciences conducted a range of behavioural studies and used high-speed video recordings to watch laboratory colonies of F. archboldi quickly immobilise trap-jaw ants with a shot of formic acid then drag them into the interior chambers of their nests and dismember them.

The study’s key finding, which Smith reports in a paper published in the journal Insectes Sociaux, is the ability of F. archboldi to match the cuticular hydrocarbons of whichever Odontomachus species is found in its area.

Cuticular hydrocarbons are the complex layer of waxes that coat the outer surface of an ant and are typically used to identify nest mates.

“It’s really unusual for an ant species to display this much variation in chemical signature,” Smith says. “Also, chemical mimicry is usually a tactic used by social parasites, but there’s no evidence that F. archboldi are a parasitic species.”

On the contrary, as previous research has suggested, F. archboldi is often enslaved.

F. archboldi is found only in Florida and parts of neighbouring Georgia and Alabama and its range is completely congruent with, or at least overlaps, three different species Odontomachus.

While Smith’s study did not find a direct link between chemical mimicry and predatory behaviour, he says it hints at a long evolutionary history between these ant species.

“Now Formica archboldi is the most chemically diverse ant species we know of,” he says.

“Before this work, it was just a species with a weird head-collecting habit. Now we have what might be a model species for understanding the evolution of chemical diversification and mimicry.”