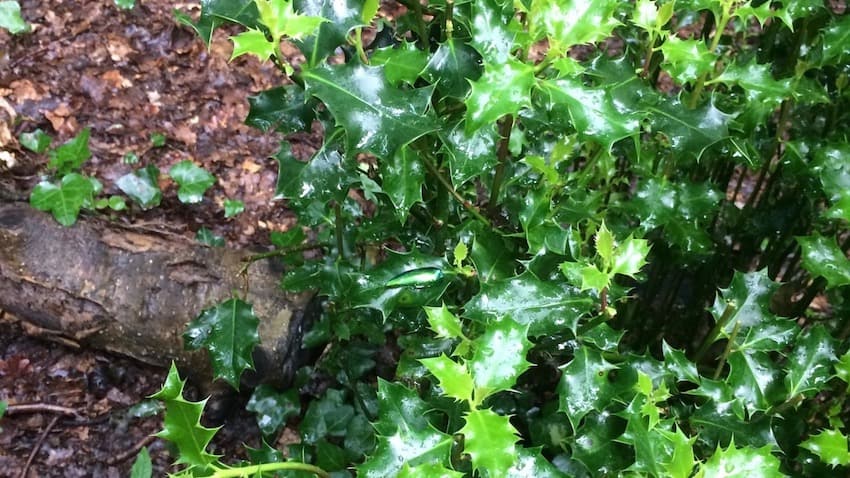 Can you see it? A model beetle keeping a low profile during a field experiment. Credit: Karin Kjernsmo and Jo Hall
More on:
colour

In the animal kingdom, bright colours usually have two main purposes: attracting a mate or warning off predators.

However, there is also a train of thought that some – rather counterintuitively – actually use brightness as a form of disguise, and a new British study adds weight to that argument.

Karin Kjernsmo and colleagues from the University of Bristol turned their attention to the Jewel beetle (Sternocera aequisignata) – a perfect subject because it is strikingly iridescent and that iridescence is found in both sexes, making sexual signalling less likely as a function of the colour.

They placed iridescent and non-iridescent beetle models on leaves in a forest then observed how often birds attacked each group. The iridescent models survived the best.

“Although an iridescent insect might be easy to spot in a well-lit museum case, these spectacular colours may not shine as brightly in the dappled light of a natural environment, and so an iridescent beetle on a shiny leaf could be much more difficult to detect,” Kjernsmo says.

And that suggests, she and colleagues write in a paper in the journal Current Biology, that the bright colours may have evolved to confuse birds, which are their primary predators.

The next step was to check that the birds weren’t, in fact, just being scared off – so they sent people in to try to find the models. Warning colours should be easy to see, whereas if the beetles survived due to camouflage, the humans would not be able to detect them. And they couldn’t.

“I think that the biggest surprise to us was that when we carried out the same experiment with humans, even they really struggled to spot the iridescent beetles,” says Kjernsmo.

“Both birds and humans really do have difficulty spotting iridescent objects in a natural, complex, forest environment.”

The researchers suggest their results may reframe our current understanding of the evolution and role of colour in some species.

“We don’t for a minute imagine that the effect is something unique to jewel beetles; indeed, we’d be disappointed if it was,” says Kjernsmo.

Originally published by Cosmos as Hiding behind its iridescence