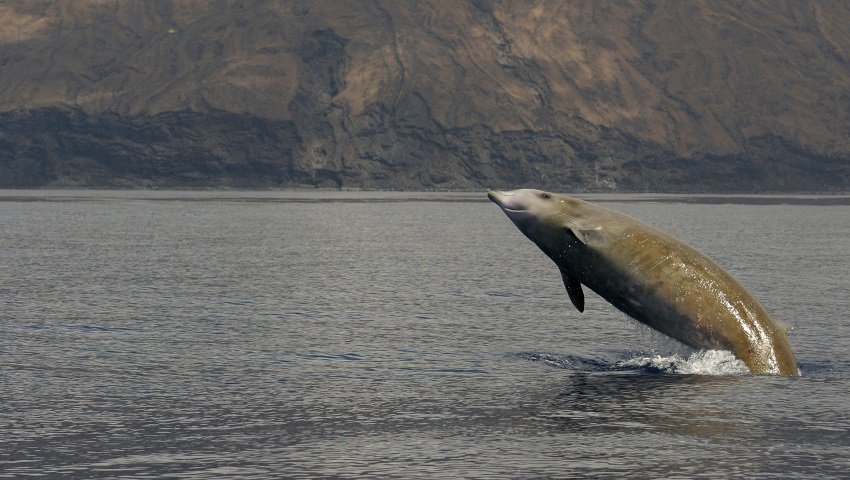 A Cuvier’s beaked whale breaching is an impressive sight, but it’s what this guy and his mates were doing below the water near El Hiero in the Canary Islands that has scientists intrigued.

A team of researchers from Spain, the Netherlands, Scotland and Denmark calls it “extreme diving synchronisation”. Despite hunting individually, beaked whales carefully co-ordinate when they dive and surface, and when and for how long they make a noise.

This behaviour has not been observed in other deep diving whales and likely has evolved, they suggest, for the specific reason of staying safe – from killer whales in particular, as they have acute hearing for detecting the sounds toothed whales must make to find food.

The routine includes a slow ascent and a long time spent in the shallows, which previous research has suggested may be to mitigate decompression sickness or accommodate lactate build up from foraging dives that may exceed the aerobic dive limit.

However, “satisfactory physiological mechanisms to support these interpretations have yet to be found”, the researchers write in their paper in the journal Scientific Reports.

To test their hypothesis, Natacha Aguilar de Soto from the University of La Laguna, Tenerife, and colleagues analysed data on 12 Cuvier’s beaked whales (Ziphius cavirostris) and 14 Blainville’s beaked whales (Mesoplodon densirostris) carrying sensors that tracked the depths to which they swam, the steepness of their dives, and the sounds they made.

They found that the whales performed closely coordinated deep dives in order to forage using echolocation but limited their vocalisations at shallow depths where they were vulnerable to attack.

They began vocalisations at around 450 metres before searching for food individually. They then reunited as a group at an average depth of 750 metres and ascended silently to the surface at a shallow angle covering an average horizontal distance of one kilometre.

It’s an effective strategy in terms of avoiding interception by predators but costly in other ways. Long silent ascents from dives lasting more than an hour reduce foraging time by around 35% compared to approaches used by other toothed whales.

And there’s another downside.

“These predator abatement behaviours have likely served beaked whales over millions of years, but may become maladaptive by playing a role in mass strandings induced by man-made predator-like sonar sounds,” the authors write.

Also known as goosenecks whales, Cuvier’s beaked whales are elite divers, helped in no small part by pockets they can put their flippers in to make them more streamlined.

Originally published by Cosmos as Flashy above the water, but low key below it