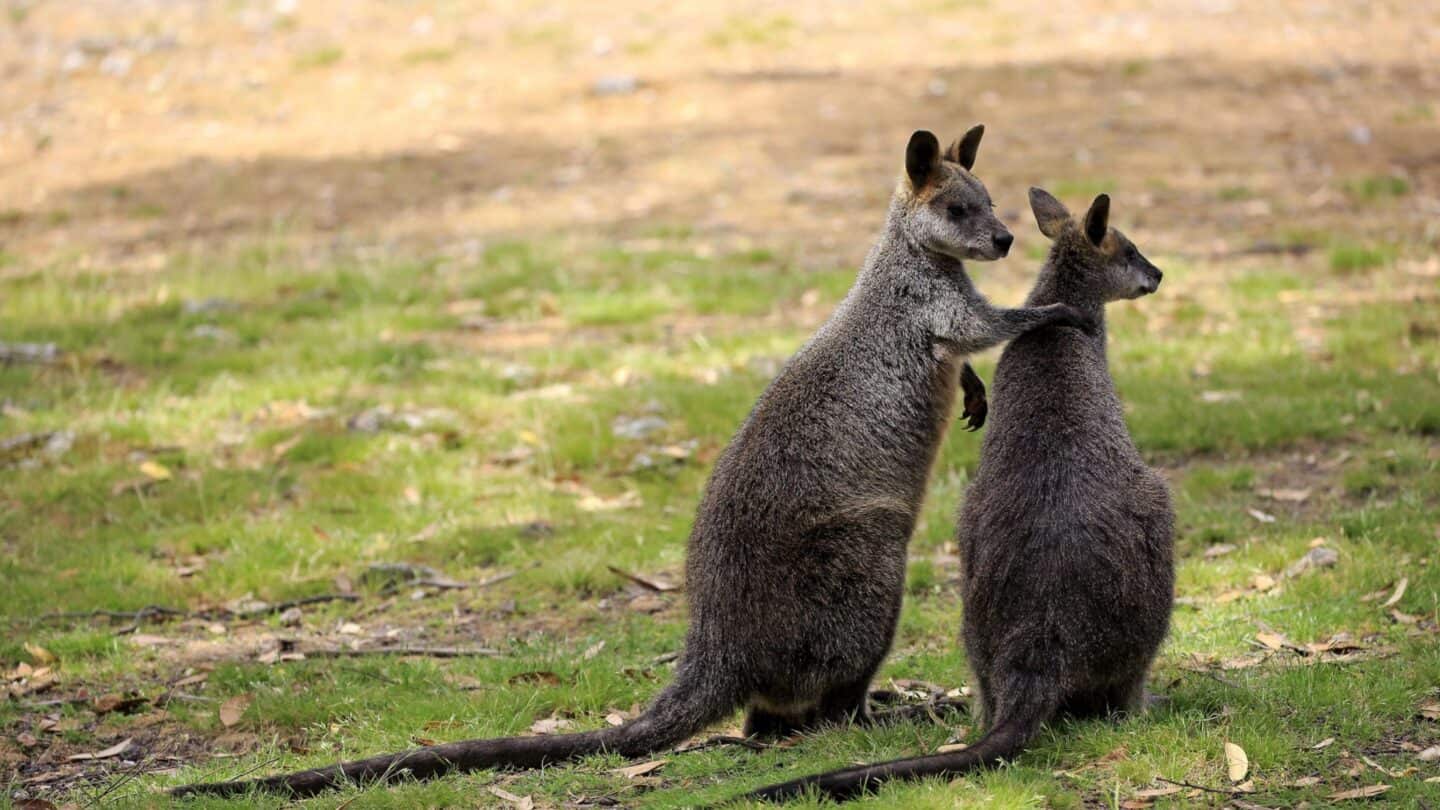 Female swamp wallabies need all the support they can get. Credit: Jurgen & Christine Sohns

Pregnancy is tough and giving birth is even tougher. Then there’s giving birth while pregnant – it sounds horrible.

Yet that’s what the swamp wallaby faces every year with researchers discovering that most adult females are always pregnant with no breaks.

While many marsupials mate just hours or days after giving birth, the swamp wallaby is only the second animal found to routinely conceive before giving birth. The first was the European brown hare, keeping true to the stereotype of breeding like rabbits.

The results have been published in the Proceedings of the National Academy of Sciences.

Usually conception during pregnancy is extremely rare. However, many marsupials including kangaroos and wallabies have two uteruses, each with their own ovaries and cervix. While kangaroos mate and conceive a day or two after giving birth, the wallaby uses its second uterus to conceive while carrying a foetus in the other.

“All female macropodid marsupials – essentially kangaroos, wallabies and a few other groups of species — except the swamp wallaby have an oestrous cycle longer than the duration of their pregnancy, so females come into oestrus, ovulate and mate within hours after birth,” says Marilyn Renfree, who oversaw the research at the University of Melbourne. The wallaby flips that pattern around.

It has been suspected for some time that swamp wallabies might conceive during an active pregnancy, but it had never been seen. One of the first indicators were three female wallabies seen having sex in late pregnancy in the 1960s – which would otherwise not provide any reproductive benefits.

This is how it works.

In January or February the female wallaby mates, despite already being pregnant from the previous year – just a day or two later she gives birth to the previous foetus. The joey climbs into the mother’s pouch, while the fertilised embryo in the ‘second’ uterus grows to around 80-100 cells before entering a dormant phase called embryonic diapause.

The joey in the pouch continues growing until September when it is ready to emerge. By December the baby has fully weaned from its mother. This reduction in lactation restarts the growth and development of the embryo. Then, just before it is born in January or February, the mother mates again and the cycle begins anew.

In fairness, while an embryo is in diapause it is probably consuming close to zero resources from the mother, so it’s maybe not quite as bad as it initially sounds. Menzies told to ScienceAlert that he doubted the mother would even know it’s pregnant during that phase.

The weird pregnancies of marsupials

The researchers made the discovery while studying a group of 10 female wallabies using a portable ultrasound imager. Because wallaby pregnancies develop along a very predictable trajectory, it’s relatively straightforward to estimate the age of embryos based on their size. Ten days after two wallabies miscarried pregnancies the team noticed they carried embryos that were two weeks old.

Ultrasounds carried out over the course of the year-long pregnancy cycle showed that other wallabies were conceiving a second time while already pregnant. Vaginal swabs then confirmed that female wallabies were ovulating and mating days before giving birth.

The findings shed light on the record-breaking reproductive systems of marsupials.

While most mammals also require a break between pregnancies, either to support new young or during periods of seasonal lack of resources, the female swamp wallaby is the only one that can claim the reproductive feat of being permanently pregnant throughout its life.

Marsupials have the largest sperm, the shortest pregnancies, and exhibit the longest periods of embryonic diapause (developmental arrest of the embryo) among mammals.

Furthermore, kangaroos and wallabies regularly support young at three different stages of development, namely, an embryo in the uterus, an early stage pouch young and a semi-dependent young at foot (still sucking milk).

However the researchers are not sure why the wallabies get knocked up before giving birth – the extra one or two days doesn’t seem to be any advantage when the embryo enters such a long diapause.

Until they crack that mystery, just be thankful you’re not a wallaby.