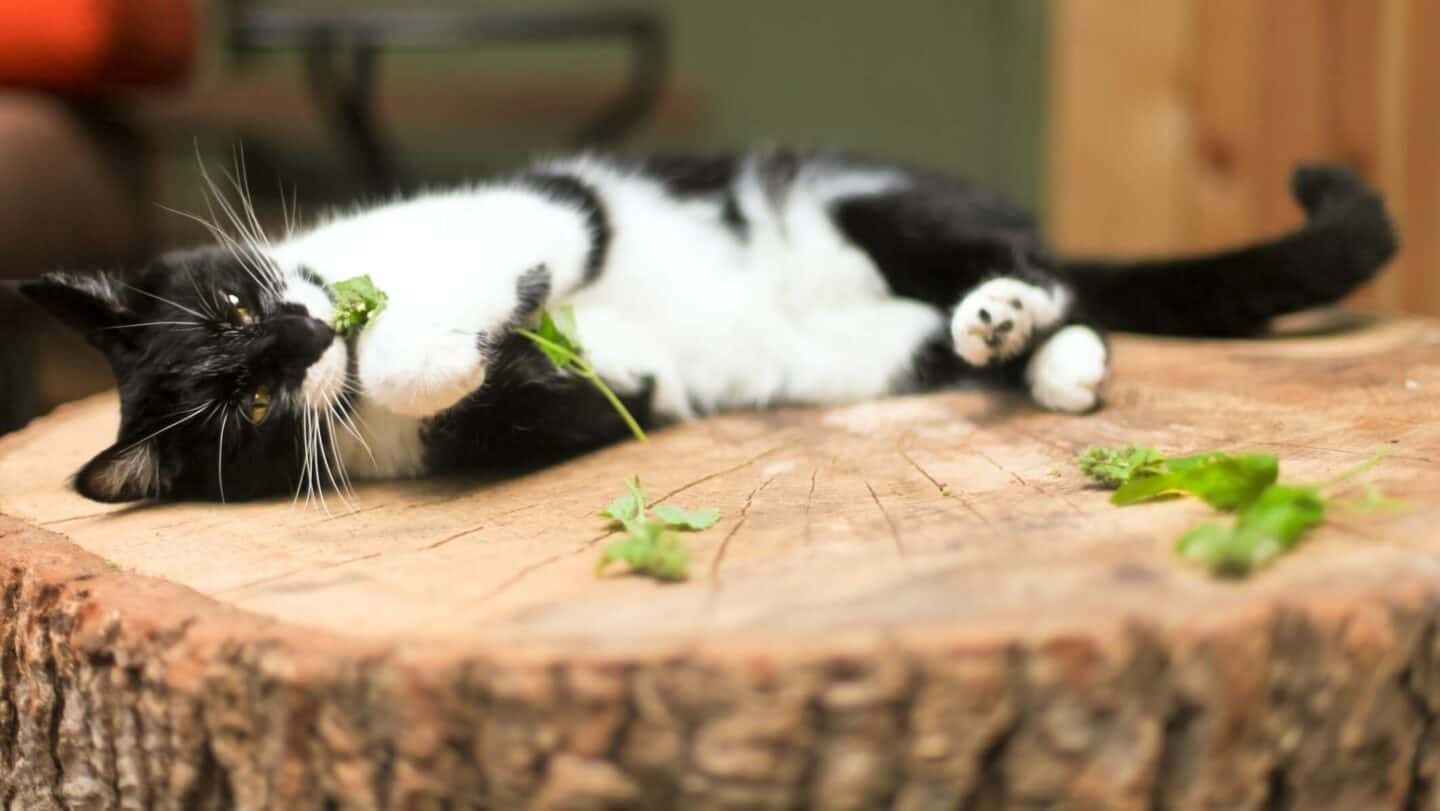 Anyone who’s ever seen a cat encounter the namesake catnip (Nepeta cataria) or silver vine (Actinidia polygama) knows that the animal goes absolutely buck wild – aggressively chewing, licking, rubbing and rolling around in it.

Despite both catnip and silver vine invoking the same strange reactions in cats, they’re not closely related, but both have evolved to produce similar (but not identical) iridoids – a type of monoterpenoid: naturally occurring chemical compounds responsible for aromas and flavours.

In previous research, scientists from Japan showed that cats’ rubbing and rolling behaviour can protect them from mosquito bites by transferring a key iridoid found in catnip and silver vine onto their faces and heads to repel the mosquito, Aedes albopictus.

Now, a new study by the same team has found that the plants’ intoxicative properties aren’t the only thing driving cats’ euphoric reactions – higher amounts of these strong insect repellents, including nepetalactol and nepetalactone, are released from damaged leaves than intact ones.

And the licking and chewing is an instinctive behaviour produced by the olfactory stimulation of iridoids in cats.

“The increased emission of iridoids from damaged leaves and changed chemical composition add together to induce a more extended duration of rubbing and rolling response, allowing cats to transfer more mosquito repellents to their fur,” says lead author Masao Miyazaki, professor in the Department of Biological Chemistry and Food Science at Iwate University, Japan.

The researchers used Gas Chromatography Mass Spectrometry (GCMS) to separate, identify and then compare the amount and composition of iridoids emitted from intact and damaged leaves.

They found that damaged catnip leaves emit a much higher level of the nepetalactone, and “physical damage of silver vine by cats promoted the immediate emission of total iridoids, which was tenfold higher than from intact leaves,” says Miyazaki.

Leaf damage also changes the composition of iridoids in silver vine – though nepetalactol accounts for over 90% of total iridoids in intact leaves, this drops to about 45% in damaged leaves, while other iridoids increase in prevalence.

This diversification of iridoids in damaged silver vine leaves makes it more repellent to mosquitoes at low concentration.

To investigate whether changes in chemical composition influence feline response to them, the scientists then prepared synthetic iridoid cocktails (corresponding to the ratios found in intact versus damaged leaves) and presented these to a set of cats.

They found that the mixture corresponding to the damaged leaves provoked a much more prolonged response.

To make sure the cats were reacting to these compounds specifically, the animals were then given dishes with pure nepetalactone and nepetalactol.

“Cats show the same response to iridoid cocktails and natural plants except for chewing,” says Miyazaki. “They lick the chemicals on the plastic dish and rub against and roll over on the dish.

“When iridoid cocktails were applied on the bottom of dishes that were then covered by a punctured plastic cover, cats still exhibited licking and chewing even though they couldn’t contact the chemicals directly.

“This means that licking and chewing is an instinctive behaviour elicited by olfactory stimulation of iridoids.”

Miyazaki and his team now want to understand which gene is responsible for cats’ reaction to catnip and silver vine.

“Our future studies promise to answer the key remaining questions of why this response is limited to Felidae species, and why some cats don’t respond to these plants,” says Miyazaki.

Originally published by Cosmos as Why do cats act so weird when exposed to catnip and silvervine?