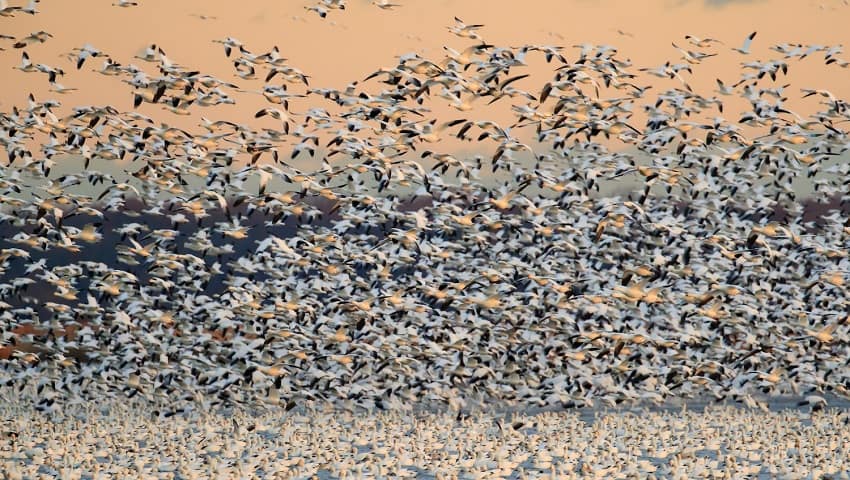 Birds have been migrating much longer than previously thought; in fact, research published in the journal Nature Communications suggests they were doing it throughout the last ice age.

“Our simulations predict that the prevalence of bird migration worldwide has remained relatively constant over the last 50,000 years,” says lead author Marius Somveille from Yale University, US, and Germany’s Max Planck Institute of Animal Behaviour.

“This suggests an origin for this phenomenon that is older than the glacial cycles of recent Earth history.”

Around 15% of bird species migrate in response to seasonal climatic variations, so it was thought they would have had less need to do it during the ice age when the weather was fairly constant.

But the authors say their findings suggest that migration was as important then as it is now.

This isn’t merely of interest as a behavioural phenomenon. It can provide insights into the ecological function of birds, which has been problematic to study because fossils only reveal their last location, not their movements.

It can also help predict their travels under future scenarios of climate change, which has started to alter their migration patterns.

Somveille had previously created a mechanistic model showing that the global seasonal distribution of birds maximises energy acquisition while minimising the energy costs associated with migration distance, factoring in breeding and competition for resources.

He and his collaborators combined this with monthly climate reconstructions they had modelled over the past 50,000 years.

“We used a model that simulates a virtual world replicating the real distribution of resources and climate in which virtual bird species were positioned in the most energy-efficient way,” he explains.

Although the patterns were surprisingly similar through the ice age, they did find regional variations in how bird migratory patterns responded to past climate change, with increased migratory activity in the Americas that was not predicted elsewhere.

The model does have room for improvement, by factoring in predation risk, geographical variations such as oceans and mountains and other adaptations that several avian lineages including corvids, woodpeckers and finches have evolved to enhance their survival.

But Somveille anticipates that, as well as helping to shed light on the origin and evolution of migration, it can be adapted to make future predictions as the climate changes to help inform conservation efforts.