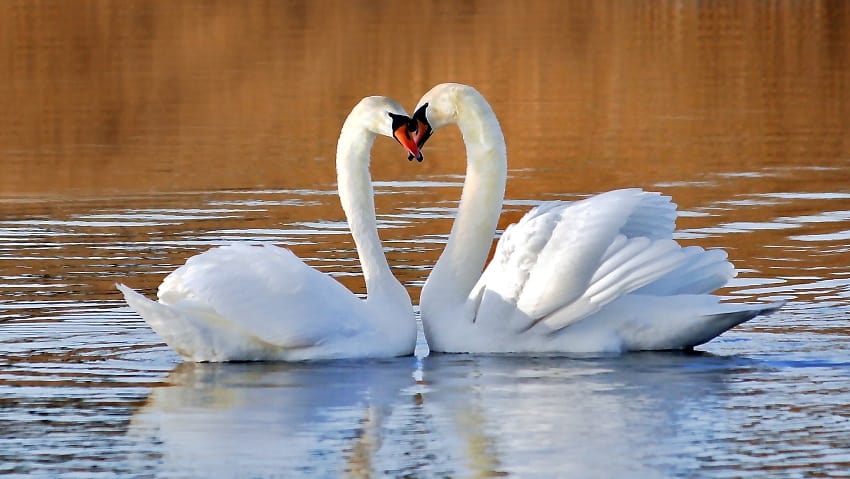 Researchers explain a strong evolutionary link between species that find a mate and stick with them. Credit; VBainesPhotography

There have long been sexual selection theories that predict males have the most to gain by seeking out as many mates as possible – an attractive position to promote for those in the dominant patriarchy, by the way.

An evolutionary reason for the opposite kinds of behaviour – loyalty to one’s mate, teamwork and private displays between pairs – have been harder to explain.

These behaviours have certainly been observed.

The males of species, such as many bird types, that form long-lasting pair-bonds often continue to make elaborate displays of plumage, colours and dances after they mate with a female.

While the males’ time and energy might be better spent taking care of their offspring, these displays also encourage the female to invest more of their energy into the brood, so there’s at least a discernible benefit.

But why go to all the fuss for an established mate when the male could just increase his odds of procreating by seeking out as many new mates as possible?

A new study published in the Proceedings of the National Academy of Sciences by biologists at the universities of Chicago and North Carolina, USA, explains how this form of sexual cooperation and bonding evolves.

“Many bird researchers can tell a story like the experience I once had in the UK,” says University of Chicago biologist Trevor Price, the study’s senior author.

“I caught a female goldfinch, placed her in a bird bag and carried it back to the banding station. All the way back to the station, her mate followed, calling.

“He waited impatiently in a nearby tree as I banded the female, and when I released her the pair flew off together in close company, twittering. This kind of thing happens in many other species, too, so forming a strong pair bond and emotional attachments between a male and female is evidently not only a feature of humans.”

Many experiments in birds (and some in fish) have now shown that males that display more vigorously, make sweeter song or carry a more attractive colour stimulate their mates to invest more in their brood.

Such findings seem strange, but they’re readily explained if the extra stimulation by the male exploits the cues a female is already using in other contexts – for instance, if a male has a certain beak colour, if there’s more of that colour on show when it displays it could increase the female’s excitement and elevate her hormone levels.

While the appearance of the flashy display that stimulates females may be good for the male (he has more offspring), it’s likely bad for the female to invest more effort – she has to work harder, thus affecting her chances of successfully raising more offspring in the future.

Using a mathematical population genetic model, Price and his colleagues show how these scenarios could advantage a species by weighing the costs of their investment with the number of hatchlings they can raise over many generations.

For example, say a species’ females typically lay three eggs and their partner helps them to raise the young, but a male with increased blue coloration causes his mate to lay four eggs. The blue males have more offspring than duller males, so blue males become increasingly common over generations.

However, raising the extra young comes at great cost to the females, so a female who lays only three eggs has an advantage over one laying four, and these females become increasingly common.

At the end of this process, all males are blue and all females lay three eggs. Only now, if the male doesn’t create a display, females would only lay two eggs – which isn’t good for either of them.

So a male has to stick around and keep up with the fancy displays so that both he and the female can get maximum benefit.

The evolutionary process can be repeated many times with another colour or kind of display. In the end, the female can become so dependent on multiple aspects of the male’s display that without it she barely ovulates, as has been shown for ring doves.

More than 80 years ago, the British biologist Julian Huxley wrote of bird displays: “Competition between males for mates, accompanied by any form of female choice is not the common phenomenon postulated by Darwin… in most monogamous birds, display begins only after pairing up for the season has occurred.”

Huxley went on to discuss how these displays contribute to a strengthening of the pair bond.

“Huxley was on to something back then, but his ideas have largely been ignored for a lack of understanding about how this could evolve,” Price says.

“We think this new research places affection between members of a pair, and mate fidelity, on a strong evolutionary footing.”

Originally published by Cosmos as The power of unbroken bonds