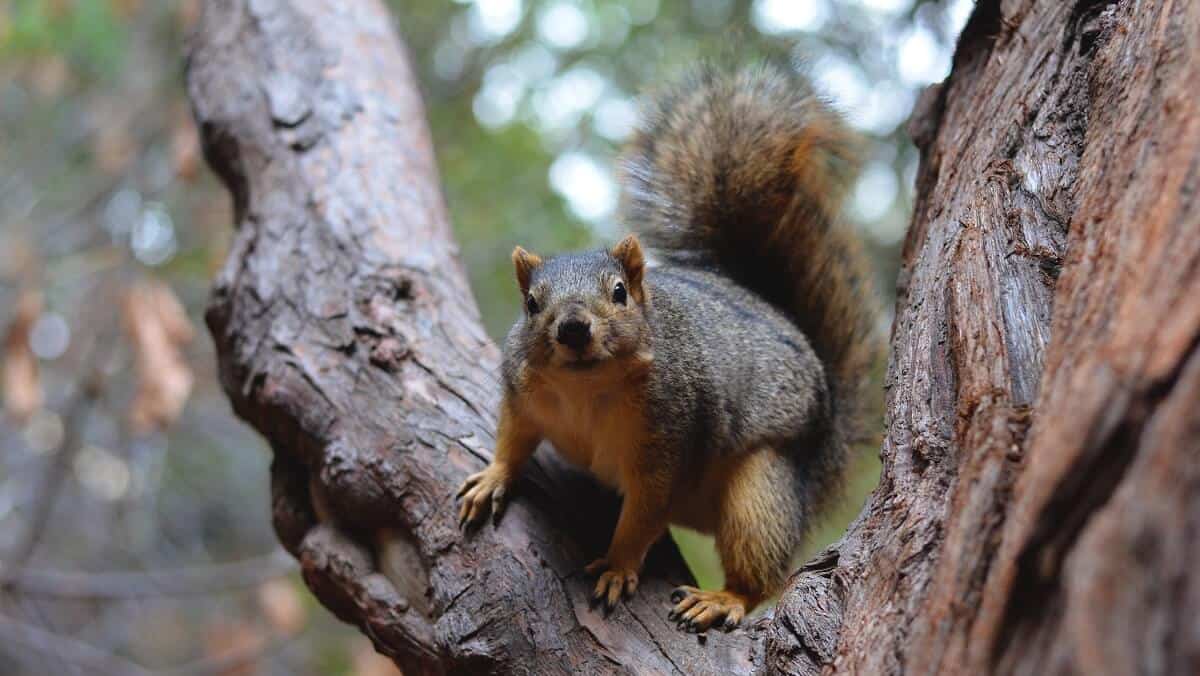 It might seem like these acrobatic squirrels are practising for their Olympic long jump debut, but they are really part of a study to answer a simple question: how do squirrels know when to take the leap?

Researchers, led by Robert Full and Nathaniel Hunt of the University of California, captured slow motion footage of wild squirrels as they leapt from one branch to another to get a peanut treat. They determined that squirrels make decisions on when and how to jump based on the flimsiness of the branch, not the distance of the leap.

“As a model organism to understand the biological limits of balance and agility, I would argue that squirrels are second to none,” says Hunt.

“If we try to understand how squirrels do this, then we may discover general principles of high-performance locomotion in the canopy and other complex terrains that apply to the movements of other animals and robots.”

Read more: The squirrels that are secretly bright pink

When on a bendy branch, the squirrels were more cautious and changed their orientation in the air to modulate the leap.

“When they leap across a gap, they decide where to take off based on a trade-off between branch flexibility and the size of the gap they must leap,” says Hunt.

“And when they encounter a branch with novel mechanical properties, they learn to adjust their launching mechanics in just a few jumps. This behavioural flexibility that adapts to the mechanics and geometry of leaping and landing structures is important to accurately leaping across a gap to land on a small target.”

When they made a jump from a bendy branch, they put more thought into their body positions and paid less attention to getting the distance exactly correct. This may be because squirrels have incredibly robust claws that can catch on to a branch even if it connects with it at the wrong angle.

“They’re not always going to have their best performance — they just have to be good enough,” says Hunt. “They have redundancy. So, if they miss, they don’t hit their centre of mass right on the landing perch – they’re amazing at being able to grab onto it. They’ll swing underneath, they’ll swing over the top. They just don’t fall.”

One of the movements the squirrels chose to use was to rotate their bodies when pushing off, which adjusted their speed in the air, they show in the report, published in Biomechanics. The extra thought they put into their body movements when jumping from a bendy branch determined how they stuck the landing.

“If they leap into the air with too much speed or too little speed, they can use a variety of landing manoeuvres to compensate,” says Hunt.

“If they jump too far, they roll forward around the branch. If they jump short, they will land with their front legs and swing underneath before pulling themselves up on top of the perch.

“This combination of adaptive planning behaviours, learning control and reactive stabilising manoeuvres helps them move quickly through the branches without falling.”

“I see this as the next frontier: how are the decisions of movement shaped by our body? This is made far more challenging, because you also must assess your environment,” says Full.

“That’s an important fundamental biology question. Fortunately, now we can understand how to embody control and explain innovation by creating physical models, like the most agile smart robots ever built.”