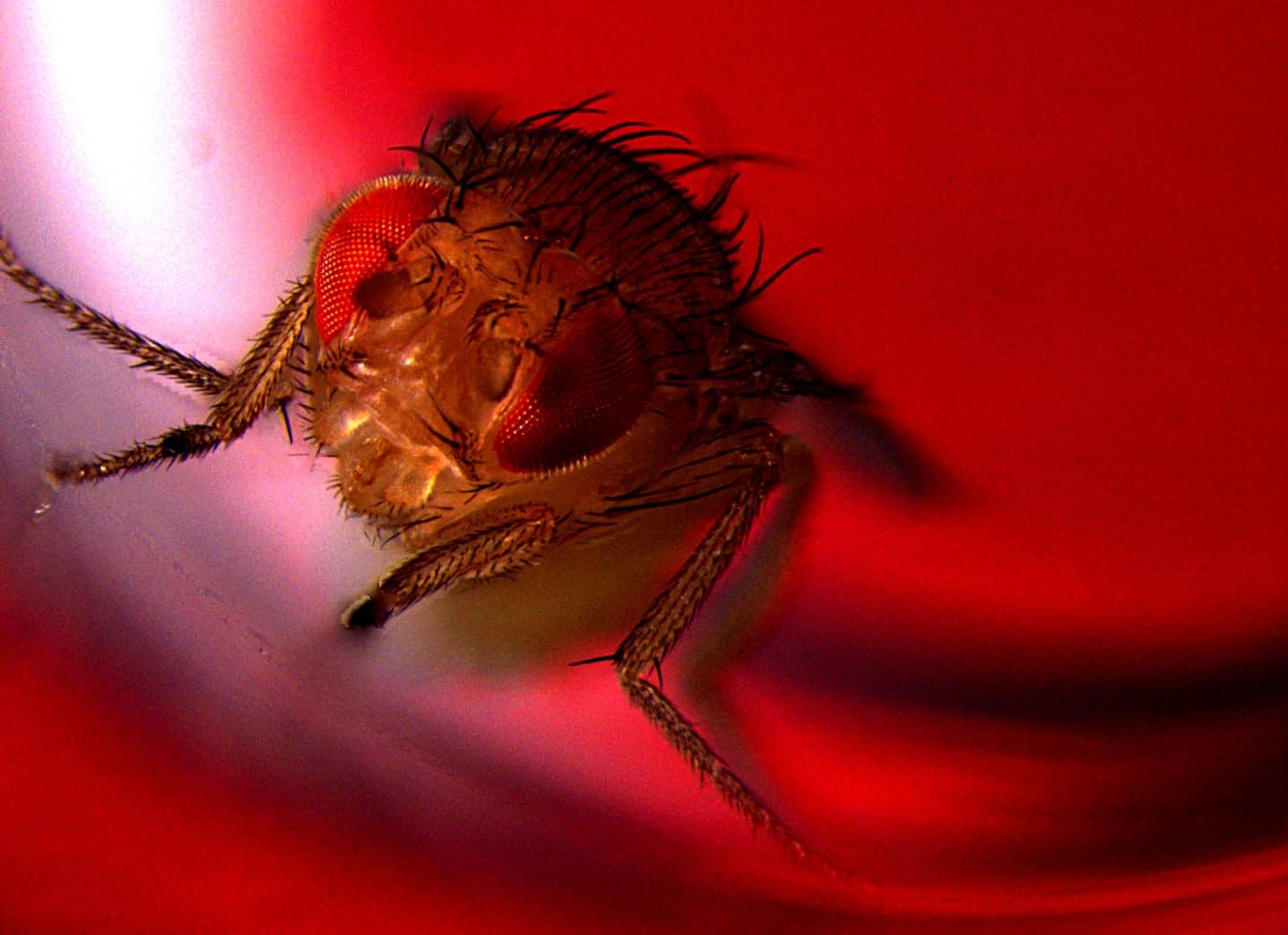 A fruit fly under a red light, having fun. Credit: Shohat-Ophir, et al.

Genetically engineered male fruit flies gain immense pleasure from ejaculating while hanging about in a red-light district, and those denied the opportunity will turn to alcohol as compensation.

That’s the faintly disturbing finding arising from research carried out at the Bar-Ilan University in Israel and published in the journal Current Biology.

Yet although the subject of the research might sound a little tawdry, the work is significant both for its results and for its methods.

To reach their conclusions, scientists led by the university’s Galit Shohat-Ophir used fruit flies (Drosophila) that had been genetically modified so that specific neurons could be activated by exposing the organism to light. The technique is called optogenetics, and is attracting a lot of attention from geneticists around the world.

The formal object of the research by Shohat-Ophir and colleagues was to determine which part of the mating experience included a reward for the male. Was it the female’s pheromones, the copulatory actions, or the release of sperm? Determining the answer was important, because it is reward systems – neurological feel-good boosts – that reinforce the reproductive behaviours that are essential for species survival.

In finding that the experience of ejaculation is the bit the boy fruit flies find fun, the scientists have found evidence that neurological rewards linked to sperm release are widely conserved across the animal kingdom – stretching at least from insects to humans.

To conduct their research, the team used a cohort of flies that had been modified to make one type of neuropeptide optogenetically active. A neuropeptide is a compound that acts as a transmitter of nerve impulses. In this case, Shohat-Ophir and colleagues were interested in neurons expressing a neuropeptide called corazonin (CRZ).

Previous research, published in 2012, had already established that CRZ neurons in the fly stomach trigger the release of sperm and seminal fluid.

The CRZ neurons in Shohat-Ophir’s research had been modified to switch on when exposed to red light. The experiment, in the end, was elegant, in a sordid kind of way. The team used four groups of flies; a modified group that was exposed repeatedly to red light, and second modified group that wasn’t, and control populations of unmodified flies that underwent the same experiences.

After a few days, all the flies were offered a choice of two liquids to drink: one straight, the other spiked with alcohol.

The modified insects which had been hanging out under the red light and ejaculating frequently opted to drink water. The rest, none of which had experienced sperm release, all hit the booze.

It was a very revealing reaction.

“The principles by which the brain processes reward are extremely conserved in all animals; this is a really basic every day machinery that helps animals survive,” Shohat-Ophir says.

“Drugs of abuse use the same systems in the brain that are used to process natural rewards. This allows us to use simple model organisms to study aspects of drug addiction, including the interplay between natural and drug rewards and the connection between experience and the mechanisms that underlie the risk to develop drug addiction.”