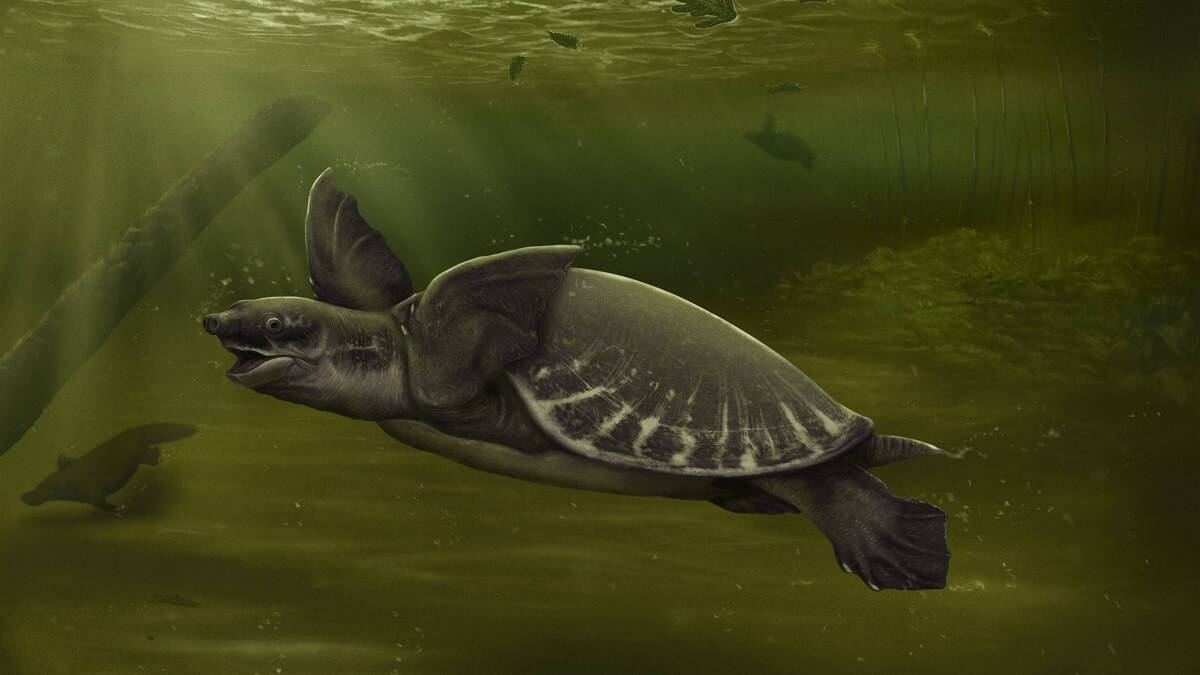 The tropical pig-nosed turtle once roamed Melbourne, before natural climate change restricted its range to the tropical north of Australia. Credit: Jaime Bran.
More on:
turtles

Piecing together the evolutionary history of a taxa is a lot like trying to solve a jigsaw puzzle that you picked up for a couple of dollars at a garage sale – most of the pieces are missing, and you’re not quite sure what the end result is meant to look like. Occasionally, you’ll come across a buried piece that suddenly ties everything together and gives you a much clearer idea of the bigger picture.

This is exactly what has happened for biologists at Monash University, who, in collaboration with Museums Victoria, have discovered a missing piece of the evolutionary history of the endangered pig-nosed turtle, which has revolutionised their understanding of this group.

Modern day pig-nosed turtles are found throughout tropical freshwater ecosystems in northern Australia and New Guinea, and are the sole survivors of a lineage that originally evolved in the northern hemisphere. Until recently researchers have believed that they arrived here a mere few thousand years ago.

As well as significantly pushing back the timeline for the arrival of these turtles in Australia, the fossil also raises some interesting questions about where the bulk of the group’s evolution took place.

“This one fossil specimen reveals a previously unknown evolutionary history of tropical turtles in Australia, and suggests we still have much to learn about the endangered pig-nosed turtle,” Rule says.

But what drove tropical turtles to migrate across entire oceans in the ancient past to settle in Beaumaris, a bayside Melbourne suburb 20km from the CBD? Melbourne’s modern-day climate is entirely inhospitable to pig-nosed turtles, and the coffee culture was still several million years off.

Winding back the clock five million years, present-day Melbourne was a vastly different place, hosting a climate similar to that found in the tropics today. Pig-nosed turtles would have happily thrived here – at least while the warmth lasted.

This fossil is the latest important discovery to come from the Beaumaris fossil site, which has proven a treasure trove for palaeontologists. The site has yielded a rich variety of fossils from the Late Miocene era, with remains ranging from tiny molluscs to marsupial lions.

“We are so lucky in Melbourne to have such fossils right here in our own backyard,” says Dr Erich Fitzgerald, a senior curator of vertebrate palaeontology at Museums Victoria and co-author of the paper.

“The fossils at Beaumaris still have so much to teach us about our past, present and future.”